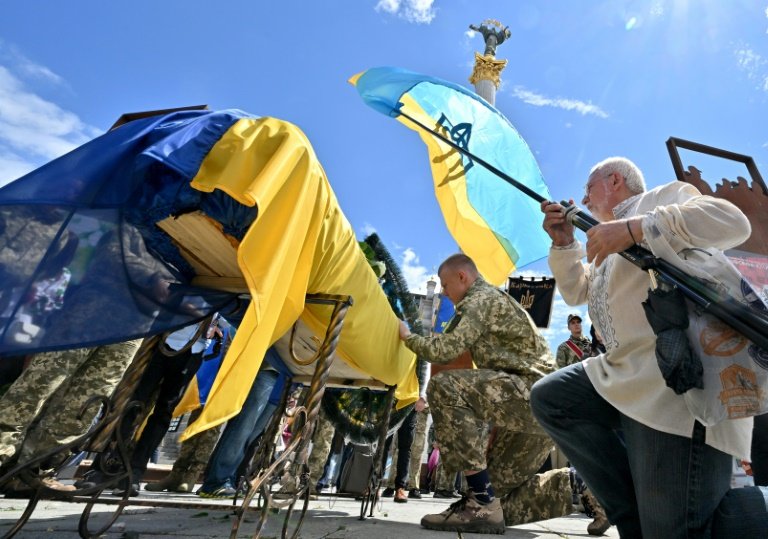 Ukrainian servicemen mourn their comrade Oleh Kutsyn, killed during the war against Russia, during a funeral ceremony at Kyiv's 'Maidan' Independence Square / © AFP

European Union leaders agree to grant "candidate status" to war-torn Ukraine and neighbouring Moldova, in a show of support in the face of Russia's war, EU chief Charles Michel says.

"A historic moment. Today marks a crucial step on your path towards the EU," Michel writes on Twitter during a summit in Brussels.

Securing candidate status is the first step on the road to EU membership, a process that can take years.

Russia closes in on the strategically important cities of Severodonetsk and Lysychansk in Ukraine's embattled eastern Donbas region.

Taking the two cities would give Moscow control of the whole of Lugansk, one of two regions with neighbouring Donetsk that make up Ukraine's industrial heartland of Donbas.

The regional governor of Donetsk, Pavlo Kyrylenko, says no town there is safe for residents as fighting intensifies between Ukrainian and Russian troops.

"It is extremely dangerous for residents to stay in any places of the region" given the current scale of fighting around Lysychansk and Severodonetsk, he says.

Germany takes a step closer to rationing its gas supplies following a sharp reduction in deliveries from Russia.

"Gas is now a scarce commodity in Germany," Economy Minister Robert Habeck says, announcing plans to raise the alert level under the country's emergency gas plan to the second-highest level.

Russian energy giant Gazprom last week cut its supplies via the Nord Stream pipeline to Germany by 60 percent, in what Berlin called a political move but Gazprom said was due to repairs.

Several EU members have already had their Russian gas supplies cut off for refusing to pay in rubles.

Ukraine says that it has taken delivery of HIMARS advanced multiple-rocket launchers from the United States.

"Himars have arrived to Ukraine.... Summer will be hot for Russian occupiers. And the last one for some of them," Ukraine Defence Minister Oleksiy Reznikov writes on Twitter.

Kyiv had pleaded for the new rocket systems, which have greater range than those it is currently using, in order to be able to strike Russian targets from safe positions.

US President Joe Biden and other world leaders will announce new punitive measures against Russia at a G7 summit starting Sunday in Germany, a senior US official says.

"We will roll out a concrete set of proposals to increase pressure on Russia," the official says.

Biden will meet with the leaders of Britain, Canada, France, Germany, Italy, and Japan at the summit in Bavaria before travelling to Madrid for a NATO summit.

Zelensky will address both summits by video link.

Russian President Vladimir Putin calls on the leaders of Brazil, India, China and South Africa -- Russia's partners in the so-called BRICS club -- to cooperate as Moscow is pummelled by Western sanctions over Ukraine.

Unprecedented sanctions by the United States and European Union over Russia's invasion of Ukraine have prompted Putin to seek new markets and strengthen ties with countries in Africa and Asia.

US sports apparel giant Nike says it will be permanently leaving the Russian market and will not reopen its stores after temporarily shuttering them shortly after Moscow sent troops into Ukraine.