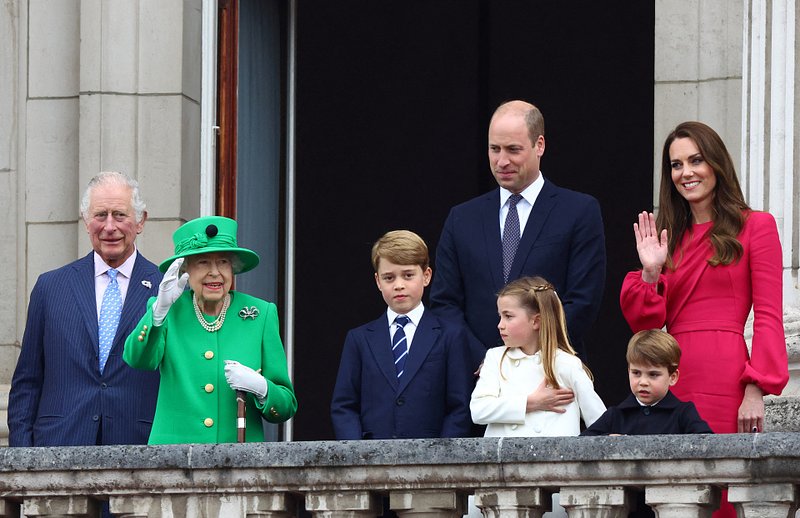 Queen Elizabeth II on Sunday brought the curtain down on her historic Platinum Jubilee celebrations, making a rare public appearance on the last of four days of festivities.

The 96-year-old monarch, who has been dogged by problems with walking and standing, appeared twice in person on the Buckingham Palace balcony after the Trooping the Colour military parade on Thursday.

The effort forced her pull out of a thanksgiving church service on Friday, plus the Epsom Derby horse race and a star-studded concert on Saturday.

But she reappeared briefly after a public parade reflecting changes in music, dance, fashion, culture and society since she came to the throne way back in 1952.

Huge crowds stretching hundreds of metres (yards) down The Mall outside the palace cheered as she emerged onto the balcony and waved.

Dressed in green with a matching hat, her white gloved hand clutching a walking stick, she was flanked by the three future kings: princes Charles, William and George.

Singer-songwriter Ed Sheeran earlier wrapped up the pageant with a rendition of his 2017 hit "Perfect", and the national anthem "God Save the Queen".

Sunday's £15-million ($18.7-million, 17.5-million-euro) "Platinum Jubilee Pageant" featuring some 10,000 people, began with a parade of armed forces from the UK and the Commonwealth she heads.

The queen's hologram was projected onto the sovereign's 260-year-old Gold State Coach that led the celebration of her record-breaking reign.

Some 6,000 disabled and non-disabled performers from street theatre, carnival and puppetry joined in to celebrate the queen's life and reign.

Highlights included an aerial artist suspended under a vast helium balloon, known as a heliosphere, bearing the sovereign's image.

In the royal box, Charles kept his four-year-old grandson Prince Louis entertained, bouncing him on his knees to the rhythm of the music.

Elsewhere across the country, more than 10 million people are estimated to have braved overcast skies to share food with friends, family and neighbours to mark the occasion.

Many saw it as a once-in-a-generation event to mark the closing of an extraordinary chapter in British life and to recognise its most famous national symbol.

On Saturday night, she put in a surprise on-screen appearance, taking tea with the beloved children's book and film character Paddington Bear.

In the pre-recorded video, she tapped out the drumbeat of rock band Queen's "We Will Rock You" -- the concert's opening number -- on a fine china teacup and saucer to get the party started.

A peak of 13.4 million viewers watched the concert on television, the BBC said.

The queen previously made a cameo with James Bond actor Daniel Craig for the opening of the London 2012 Olympics.

A running theme has been the dramatic social, political and technological changes in Britain and the world since the queen came to the throne -- and her constant presence through it all.

With Charles now 73, the next jubilee -- probably for his eldest son William's 25th year on the throne -- could be at least 50 years away.

"She's the world's grandmother as far I'm concerned," he told the Sunday Times.

But there was also acknowledgement the second Elizabethan era -- five centuries after the first -- is nearly over.

A spectacular light show illuminated the palace and the night sky above it on Saturday, including images of a corgi, a handbag and a teapot.

"Inevitably, this celebration had a valedictory feel," the Sunday Telegraph said of Saturday's concert, which was headlined by Diana Ross.

"But there is also the keen awareness that we will never see the likes of this monarch again."

"It won't be the same without our queen," Julie Blewitt, 56, from Manchester, told AFP outside St Paul's Cathedral on Friday.

"It's such a shame she won't be here for much longer."

The Observer weekly called it "part of a long goodbye that began with her solitary attendance at Prince Philip's funeral last year".

The queen has gradually been preparing the public for the familiar figure of Charles to take over as king.

The jubilee was "an opportunity to reflect on all that has been achieved during the last 70 years, as we look to the future with confidence and enthusiasm," she said in a message on Wednesday.

Yet the institution that Charles and, after him, William will lead will be different from the one Elizabeth inherited in the aftermath of World War II.

Then, Britain was still a major colonial power but republican movements are gathering pace in the 14 Commonwealth countries where the queen is also head of state, including Australia and in the Caribbean.