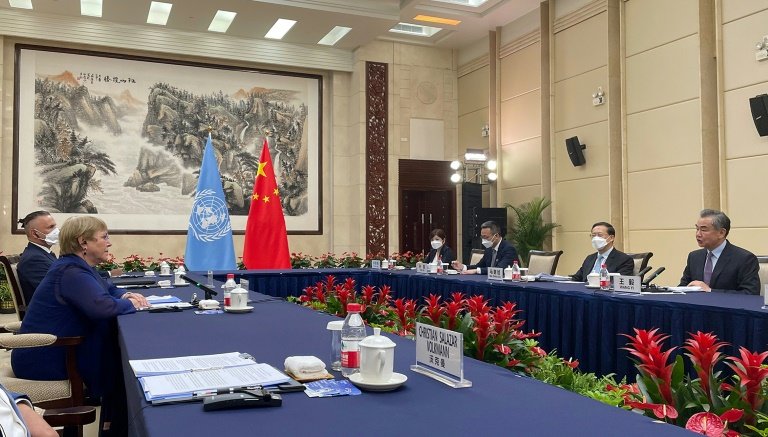 The UN rights envoy on Saturday defended her contentious visit to China, but urged authorities to avoid "arbitrary and indiscriminate" measures in Xinjiang, a region where Beijing is accused of widespread human rights abuses.

Michelle Bachelet's remarks were swiftly criticised by activists and NGOs, who accused her of providing Beijing with a major propaganda win.

Bachelet's long-planned trip this week has taken her to the far-western Xinjiang region, where China is alleged to have detained over a million Uyghurs and other Muslim minorities, as well as carried out forced sterilisation of women and coerced labour.

But she insisted on Saturday that her visit was "not an investigation", while China's vice foreign minister boasted that it had achieved "positive concrete results".

The United States has labelled China's actions in Xinjiang a "genocide" and "crimes against humanity", allegations vehemently denied by Beijing which says its security crackdown was a necessary response to extremism.

Speaking at the end of her trip while still inside China, Bachelet framed her visit as a chance for her to speak with "candour" to Chinese authorities as well as civil society groups and academics.

The trip was the first to China by the UN's top rights envoy in 17 years and comes after painstaking negotiations over the conditions of her visit.

In her strongest comments aimed at Beijing, Bachelet urged China to avoid "arbitrary and indiscriminate measures" in its crackdown in Xinjiang -- but also said she recognised the damage caused by "violent acts of extremism".

"This visit was not an investigation," she told reporters, later insisting she had "unsupervised" access to sources the UN had arranged to meet in Xinjiang.

She said she had met the provincial Communist Party boss as well as security chiefs in one of the most tightly surveilled places on earth.

Rights groups accuse Beijing of mass detentions of entire communities of mainly Uyghurs, many of whom have had no chance to communicate with their families outside for several years.

"We are aware of the number of people seeking news on the fate of loved ones… This and other issues were raised with authorities," Bachelet said, declining to add detail given the sensitivity of the issue to China's security apparatus.

Bachelet stopped in the Xinjiang cities of Urumqi and Kashgar, where she visited a prison and a former re-education camp, as well as the touristic Kashgar Old Town, a counter-terrorism exhibition and cotton fields.

Ma said these visits allowed her to "experience progress ... in preserving and promoting ethnic minority traditions", adding that "Xinjiang is not at all a human rights issue".

Bachelet said she saw prisoners and an internal court of appeal in Kashgar Prison, describing her access as "pretty open, pretty transparent".

The Xinjiang government had assured her that a network of "vocational training centres" -- which rights groups say are forced re-education camps -- have "been dismantled", she said, adding she was "unable to assess the full scale".

Beijing announced in 2019 that all "trainees" had graduated from "vocational training centres", but rights groups allege that many detainees were transferred to factories as forced labour, or instead moved to Xinjiang's ballooning network of prisons.

Bachelet did not address the long-stalled release of her report into alleged Xinjiang abuses, and pledged to maintain further contact with Chinese authorities on human rights issues.

Bachelet had already come under fire from rights groups and Uyghurs overseas, but her press conference sparked a new round of criticism.

"Resignation is the only meaningful thing she can do for the Human Rights Council," said Dilxat Raxit, spokesperson for the World Uyghur Congress advocacy group, while US-based Uyghur activist Rayhan Asat called it a "total betrayal" on Twitter.

Human Rights Watch's Executive Director Kenneth Roth dismissed Bachelet's argument that the trip had been valuable in allowing her to speak frankly to Chinese officials.

"Such quiet backroom conversation is just what Beijing wants -- no public reporting, no pressure to end its intense repression of Uyghurs and others," Roth tweeted.

"The High Commissioner's visit has been characterized by photo opportunities with senior government officials and manipulation of her statements by Chinese state media, leaving an impression that she has walked straight into a highly predictable propaganda exercise for the Chinese government," Amnesty International's Secretary General Agnes Callamard said in a statement.

Her office later clarified that her remarks did not contain a direct endorsement of China's rights record.