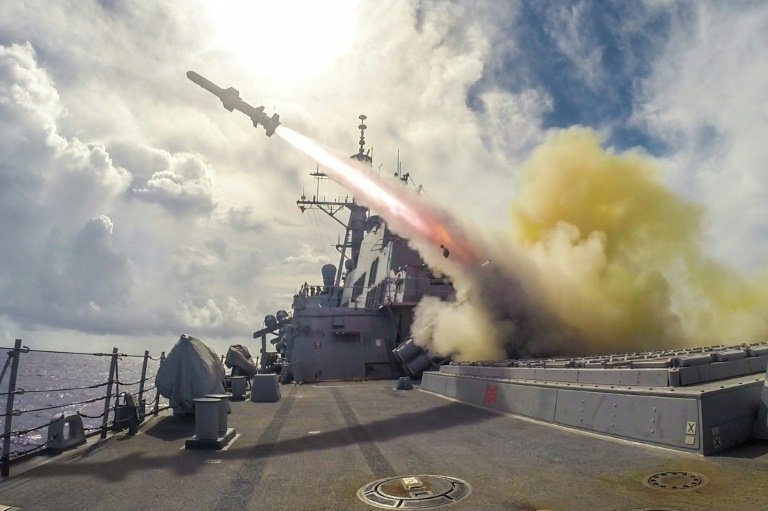 Denmark has pledged to supply Ukraine with Harpoon anti-ship missile systems, like this one seen launching from a US Navy vessel. / © US NAVY/AFP

Some 20 countries offered new security assistance packages for Ukraine to battle invading Russian forces in a meeting of allies on Monday, US Secretary of Defense Lloyd Austin announced.

The group was briefed by Ukraine Defense Minister Oleksiy Reznikov on the current situation of the three-month-old war, in which the two sides are fighting along a long front line over territory Russia has seized in Ukraine's east and south.

"Today, together with Minister Reznikov and his team, we've gained a sharper and shared sense of Ukraine's priority requirements and the situation on the battlefield," Austin said.

"Many countries are donating critically needed artillery ammunition, coastal defence systems and tanks and other armoured vehicles," he said.

Others, he added, are offering training for Ukraine's military.

He said that Denmark committed to send a Harpoon anti-ship missile system, and the Czech Republic was offering attack helicopters, tanks and rocket systems.

Harpoons are cruise missiles that can skim the surface of the sea to target ships as far as 187 miles (300 kilometers) offshore, depending on the type.

Usually Harpoons are mounted aboard ships or aircraft, but Denmark is the only country that acquired land-based systems for coastal protection.

The Danish battery would add a layer of protection to Ukraine's Black Sea port of Odessa, which is believed to be under threat of Russian invasion from the sea.

They could also potentially reach the port of Sevastopol, where some of the Russian Black Sea fleet is based.

Austin would not provide details of what is included in a new $40 billion US assistance package for Ukraine, amid speculation that it could include high-precision, long-distance rockets that could be used to hit Russian territory.

Ukraine has asked the United States for mobile batteries of long-range rockets, the M270 MLRS and the M142 Himars.

They can launch multiple rockets at the same time with a range of up to 187 miles, eight times or more the distance of artillery in the field.

That could give Ukrainian forces the ability to reach, with great precision, targets far behind Russian lines.

It could also allow them to hit targets well inside Russia, though it is unclear if that is their intent.

Since the first meeting of the weapons donor group at a US base in Germany four weeks ago, Austin said, "the momentum of donations and deliveries has been outstanding."

He said Ukraine's needs have not changed much since the previous meeting and the war continues to be driven by artillery, supported by tanks, drones and other equipment.

"The fight is really shaped by artillery in this phase, and we've seen serious exchanges of artillery fires over the last several weeks," Austin said.

"Everyone here understands the stakes of this war and they stretch far beyond Europe," he added.

"Russia's aggression is an affront to the rules-based international order."

The Ukraine Defense Contact Group is due to meet next in person on June 15 during the NATO ministerial meeting in Brussels, Austin said.