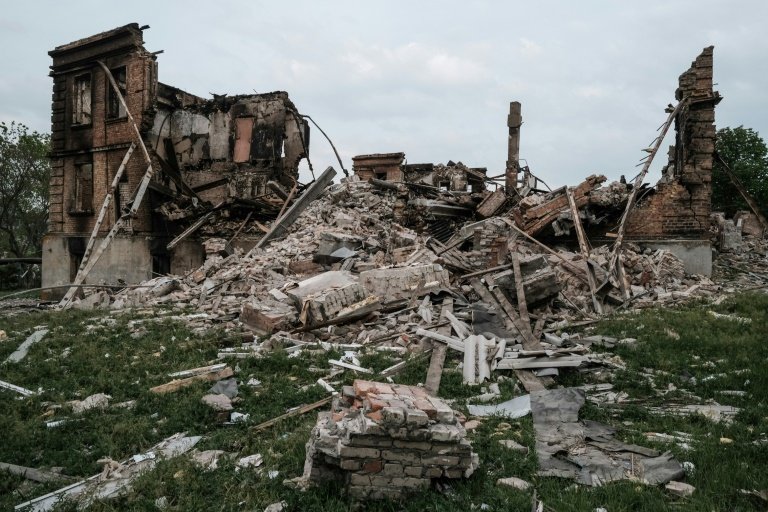 The remains of a destroyed school in which Ukrainian official say 60 people sheltering in a basement died following a Russian military strike on the village of Bilogorivka, Lugansk region, eastern Ukraine / © AFP

Ukraine on Saturday claimed it was holding back a Russian assault in the eastern Donbas region and vowed to extract its last remaining fighters from a besieged steel plant.

The G7 group of the world's top industrialised nations meanwhile reiterated it would "never recognise" the borders Russia has attempted to redraw through aggression and pledged more sanctions to tighten the screw on Moscow.

Ukraine's head of military intelligence, however, predicted a turning point in the months ahead, and claimed that one of Europe's biggest conflicts since World War II could even be over by the end of the year.

Russia, which sent in troops to Ukraine on February 24, has increasingly turned its attention to eastern Ukraine since the end of March, after failing to take the capital Kyiv.

Western analysts believe President Vladimir Putin has his sights on annexing southern and eastern Ukraine in the months ahead but his troops have appeared to be encountering stiff resistance.

The governor of the eastern Lugansk region, Serhiy Gaidai, said Ukrainian forces had prevented Russian attempts to cross a river and encircle the city of Severodonetsk. 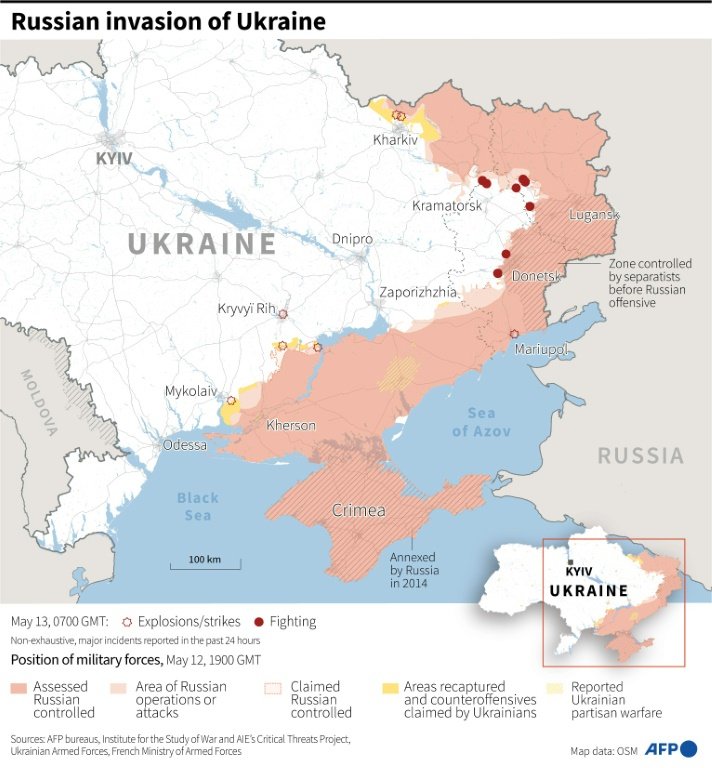 "From interceptions (phone calls), we understand that a whole (Russian) battalion has refused to attack, because they see what's happening." 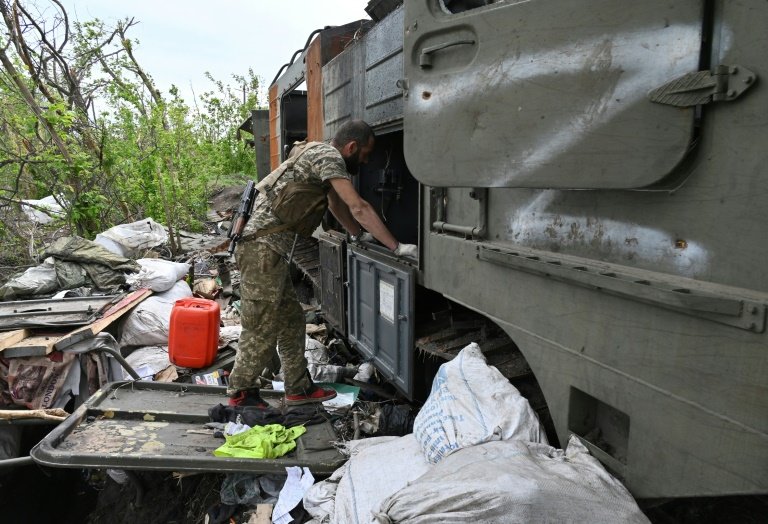 The highly risky manoeuvre reflected "the pressure the Russian commanders are under to make progress in their operations in eastern Ukraine", it added.

Russian forces had "failed to make any significant advances despite concentrating forces in this area", it said.

In Washington, a senior US defence official said most of the activity was now in the Donbas area.

Kharkiv regional governor Oleh Synegubov meanwhile said in a video on Telegram that Ukrainian forces were counter-attacking in the direction of the northeastern city of Izium.

The Ukrainian General Staff said troops had managed to push Russian troops out of the Kharkiv, a priority target for Moscow.

"The enemy's main efforts are focused on ensuring the withdrawal of its units from the city of Kharkiv," a spokesman said.

Ukrainian President Volodymyr Zelensky on Friday said his troops would fight to recapture all occupied territory, and those under siege.

That included those in the southern port city of Mariupol, where the last defenders are holed up in the vast Azovstal steelworks.

"Currently, very difficult negotiations are under way on the next stage of the evacuation mission -- the rescue of the seriously wounded, medics. It is a large number of people," he said.

Women, children and the elderly who had taken refuge in the tunnels and bunkers in the Azovstal plant were evacuated at the end of April with the help of the United Nations and Red Cross.

The Ukrainian General Staff said in an update Saturday that Russian forces continued "to blockade our units near the Azovstal plant" and carried out "massive artillery and air strikes". 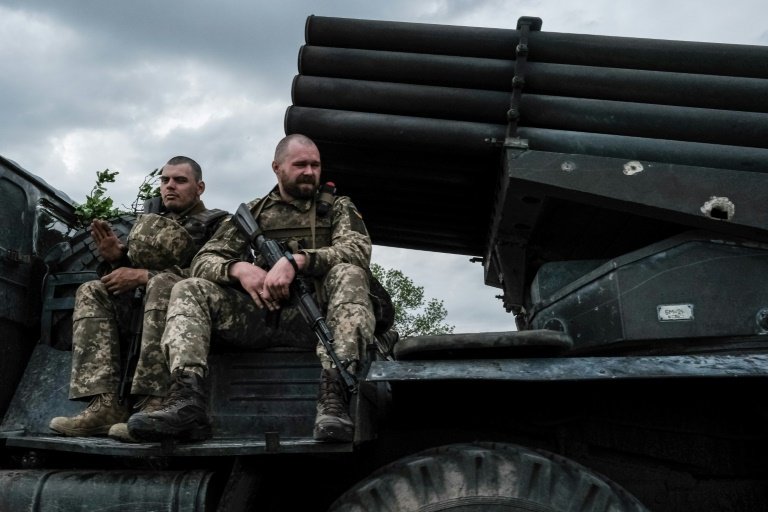 From inside, Sviatoslav Palamar, one of the leaders of the Ukrainian Azov regiment, told the online Kyiv Security Forum there were 600 wounded there and pleaded for help to evacuate them.

"We continue to defend ourselves, and we shall not surrender," he said.

Western leaders have predicted a long drawn-out conflict, after Russia was denied a hoped-for swift victory in the face of stubborn Ukrainian resistance. 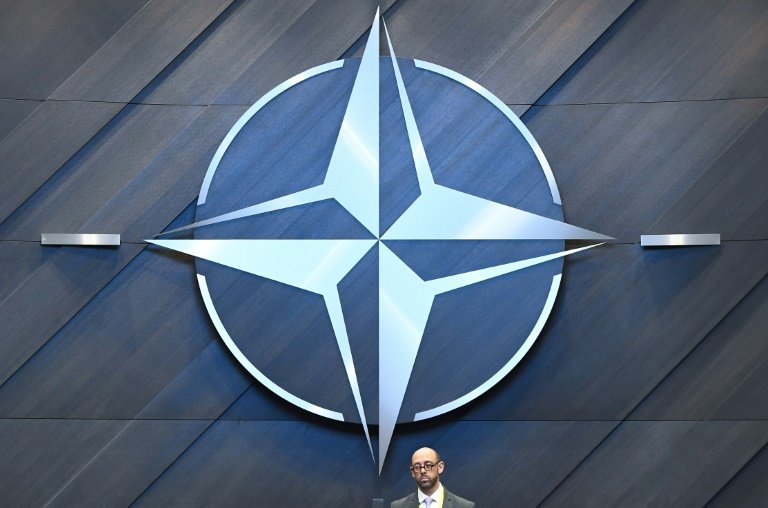 An informal meeting of NATO foreign ministers is scheduled in Berlin, with Sweden and Finland discussing their bids to join / © AFP/File

But Ukraine's military intelligence chief, Major General Kyrylo Budanov said the months ahead would be decisive.

"The breaking point will be in the second part of August," he told Britain's Sky News television. "Most of the active combat actions will have finished by the end of this year."

Budanov also predicted internal turmoil in Russia as a result, without elaborating.

Russia has rejected claims that it has been targeting civilians, in particular schools in the Donbas region, after Ukraine last week said 60 people were killed in the coal mining village of Bilogorivka.

"The world has turned upside down," said Vladimir Gerasimenko, 70, as he surveyed the remains of the school, where the local governor says civilians were sheltering from an aerial bombardment and "likely" died.

"Slavs are killing Slavs. Who knows why or what for," he told AFP.

G7 foreign ministers meeting in Germany on Saturday restated the group's support for Ukraine, promised to tighten the screw of Western sanctions on Russia, and blasted Belarus for "enabling" the war.

An informal meeting of NATO foreign ministers is also scheduled in Berlin on Saturday, where the Swedish and Finnish ministers plan to meet their Turkish counterpart to discuss their ambitions to join the alliance.

Russia has warned that it would be forced to take "reciprocal steps" if Finland joined alliance in response to the conflict in Ukraine, to "address the resulting threats".

A day after leaders in Helsinki declared their nation must apply to join NATO "without delay", Finland's grid operator said Russia had suspended electricity supplies overnight.

Inter RAO's subsidiary in the Nordic region blamed the suspension on not having received payment for electricity sold in May.