Emmanuel Macron's presidency began with an invitation for Russian leader Vladimir Putin to the sumptuous former royal palace at Versailles. As his term draws to a close, European leaders are meeting in the same place to discuss Putin’s war on Ukraine.

Although the 27 European Union government chiefs put on smiling faces on the red carpet, it was clear from their words that the outbreak of war in Europe was deeply unsettling.

Macron himself expressed "pessimism" about the outcome of the conflict, and none dared predict a swift end to the invasion the Russian army launched against its neighbour two weeks ago.

A grave atmosphere filled the Salon d'Hercule near the former royal apartments as the 27 gathered around a conference table, contrasting sharply with the ornate marble decor and vast ceiling canvas depicting Greek mythological hero Hercules.

After their working session, Ukraine will be top of the agenda at dinner in the baroque Hall of Mirrors, where the Treaty of Versailles put the seal on a reshaped Europe after World War I. 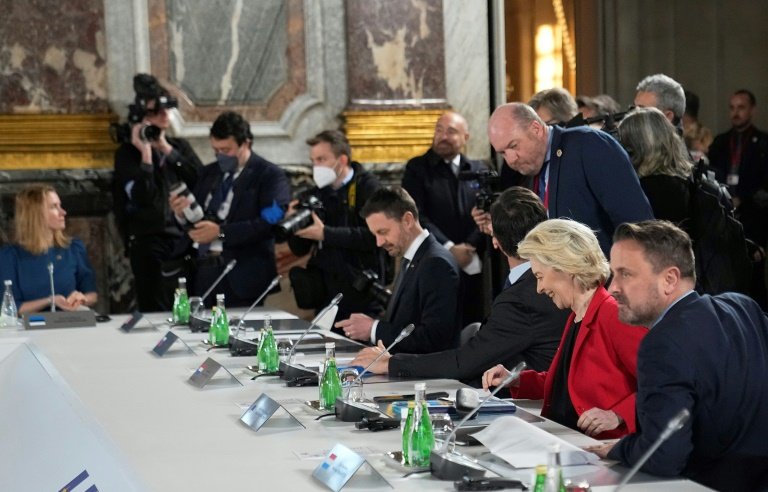 A grave atmosphere filled the Salon d'Hercule near the former royal apartments as the 27 gathered around a conference table, / © POOL/AFP

Macron decided to host his European counterparts at the palace of Sun King Louis XIV before Putin attacked Ukraine on February 24, as the site is close to Paris and relatively simple to secure.

But the authorities say they are aware of the gulf between their luxurious surroundings and the bleak images from the front line, where cities have been shelled and the mass flight of civilians has drawn compassion from across Europe.

"This isn't a party. We have to be sober during this period," France's Europe Minister Clement Beaune told France Inter radio.

The European summit comes one month before the first round of France's presidential election, when Macron hopes to secure a second five-year term.

As French voters struggle with accelerating inflation stoked by the war, especially in energy costs, that makes avoiding the impression of elite extravagance all the more pressing.

As 'a place of both royal and republican power', Versailles is a 'showroom of the French imagination' / © AFP

The contrast is sharp with 2017, when Macron guided Putin through the palace, showing off huge paintings of renowned French military victories in the Hall of Battles.

At the time, he hoped to renew relations with Moscow after years of tension over Russia's annexation of Crimea from Ukraine and continued fighting in the eastern Donbas region.

Macron told reporters at the time that he hoped to "de-escalate" tensions, in part through meetings of the so-called "Normandy Format" bringing together Russia, Ukraine, France and Germany.

Sanctions would contribute "nothing at all" to resolving the crisis, Putin said during the visit.

Macron has used Versailles more intensively than his predecessors in his five-year term, pressing it into service as an instrument of French soft power.

As "a place of both royal and republican power", Versailles is "a showroom of the French imagination. It fascinates people," a person close to him said in 2018.

Besides Putin, Macron has hosted then-crown prince Naruhito, now Emperor of Japan, at the palace.

He has twice gathered Senate and National Assembly lawmakers there for special congresses and regularly invited chiefs of multinational firms in a bid to attract jobs to France.