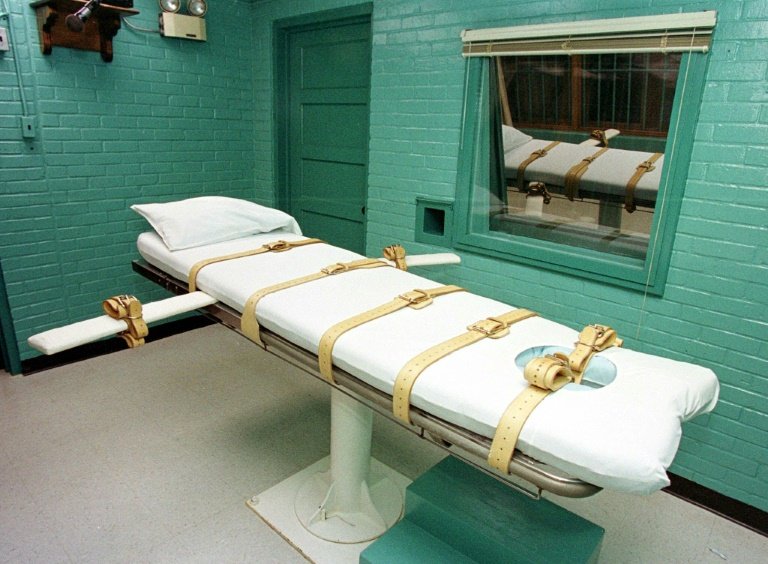 An execution room in a Texas prison / © AFP/File

An Alabama man convicted of murder was put to death by lethal injection after the US Supreme Court ruled the execution could go ahead.

Matthew Reeves, a 44-year-old African-American, was executed late Thursday for the 1996 murder of Willie Johnson, a man who had offered Reeves a ride in his car.

He shot Johnson and stole $360, and later went to a party where he boasted of the crime.

Reeves was pronounced dead at 9:24 pm (0342 GMT Friday) at Atmore penitentiary in the southern state, an Alabama official said.

A final decision on Reeve's execution had gone to the Supreme Court via his challenge to the method planned.

The state planned to execute him by lethal injection; he sued saying he had wanted to die by nitrogen hypoxia, in which the prisoner breathes only pure nitrogen until he is asphyxiated.

In his suit Reeves said he was intellectually disabled and had not understood a prison form that gave him one month to decide on the method of execution.

He did not complete the form in time, and Alabama authorities moved ahead for a lethal injection execution; the state has never used the nitrogen hypoxia method.

Reeves' claim was accepted in district and appeals court rulings. But the Supreme Court, in a 5-4 vote Thursday, accepted the state's argument that Reeves was mentally sound enough to understand the forms.

In their opinion, three of the dissenting justices said the Supreme Court should have accepted the detailed findings of the lower courts in favor of Reeves.

"As the lower courts recognized, the state will soon be ready to execute Reeves by nitrogen hypoxia. A short delay cannot justify dismissing, as the court does today, the strength of Reeves’s suit," they wrote.