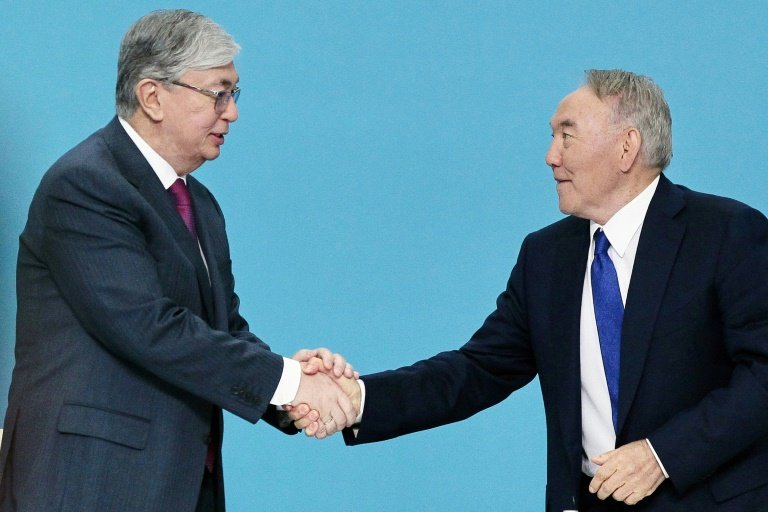 Kazakhstan's president was voted chairman of the ruling party on Friday, replacing his mentor and former head of state Nursultan Nazarbayev, in the wake of bloody unrest that exposed a leaderhip struggle.

The move came after unprecedented unrest in the Central Asian country that left more than 200 people dead and saw a Russian-led military force intervene at the president's request.

"The President of the Republic of Kazakhstan, Kassym-Jomart (Tokayev), was unanimously elected Chairman of the Nur Otan Party," his office wrote on Twitter.

Tokayev this month questioned 81-year-old Nazarbayev's legacy, in particular widening inequality between the elite and the poor in the region's richest country.

Nazarbayev had ruled ex-Soviet Kazakhstan for close to three decades, brooking no opposition, before hand-picking Tokayev, 68, a career diplomat and then-loyalist, to replace him in 2019.

Nazarbayev had already announced last year he would hand leadership of the party to Tokayev. The move signalled Tokayev would stand for another presidential term, although the ex-leader was still widely regarded as the country's decider.

Tokayev told the online congress that his chairmanship could be temporary, citing the need for an "equidistant status of the head of state".

"The first president did a lot to turn our country into a strong state," he said, to dispel "various negative rumours".

He added he was confident Kazakhstan "will successfully cope with all the challenges of the new time".

Nazarbayev still retains the constitutional title of 'Leader of the Nation' -- a designation that grants him immunity from prosecution and at present affords him some policymaking privileges.

But Tokayev signalled the end of the Nazarbayev era during a speech earlier this month, when he criticised his mentor for presiding over damaging wealth inequality.

Nazarbayev's rule created "a layer of wealthy people, even by international standards", he said.

In the days that followed, a series of once-powerful Nazarbayev relatives and in-laws were jettisoned from top corporate and political posts.

On Friday it was the turn of Dariga Nazarbayeva, Nazarbayev's oldest daughter, who was once viewed as a potential successor to her father.

Nazarbayeva, 58, was not among the figures included in Nur Otan's new-look political council.

Her removal from the top tables of Kazakh politics caps a fall that began with her dismissal as senate speaker -- and second in line to the head of state -- in 2020.

Tokayev had held the role before taking over in 2019, and before he dismissed her there were perceptions she may be next in line to lead the country.

That period also saw Nazarbayeva and her oldest son Nurali Aliyev embroiled in a high court struggle to retain control over lavish London properties after the United Kingdom's National Crime Agency challenged their ownership of the assets.

The unsuccessful challenge was linked to the agency's suspicion that the homes were procured with funds embezzled by Nazarbayeva's late ex-husband Rakhat Aliyev, who split from Nazarbayev and became the strongman's nemesis.

Aliyev died in an Austrian jail cell in 2015 awaiting trial for the alleged murder of two bankers in Kazakhstan, with Austrian authorities deeming the death a suicide.

Nazarbayeva's younger son, Aisultan Nazarbayev, died in London in 2020, during a battle with drug addiction that saw him make a series of scandalous claims about the former ruling family in media interviews and on Facebook.

Tokayev took over Nazarbayev's most powerful position -- chairmanship of the national security council -- on January 5, on a day when protests that began over a fuel price hike morphed into deadly clashes and looting.

Tokayev blamed the violence on bandits and "terrorists" with foreign links. Karim Masimov, a long-time Nazarbayev ally was announced detained on coup-plotting charges later that week.

Appearing on January 18 for the first time since the crisis began, Nazarbayev denied any conflict with his successor, referring to himself as "a pensioner".