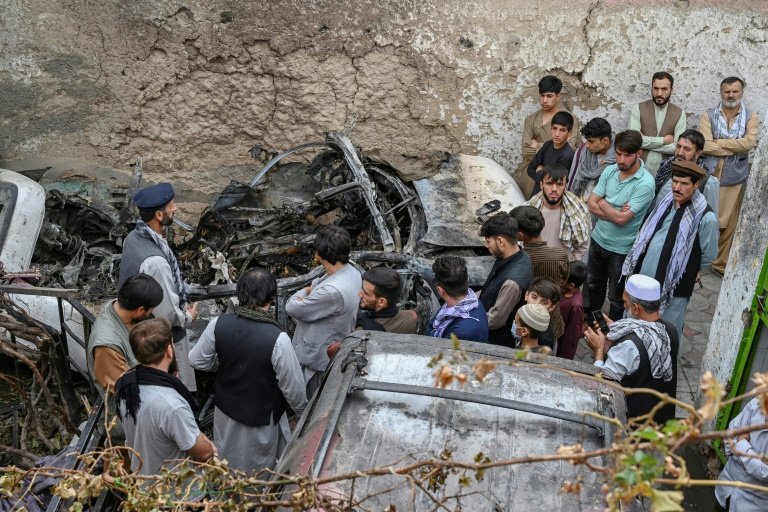 The scene of the US drone strike in Kabul on August 29, 2021 -- which the Pentagon now admits mistakenly killed 10 people, including seven children / © AFP/File

"The protection of civilians is fundamentally consistent with the effective, efficient and decisive use of force in pursuit of US national interests," Austin said in a directive issued to Department of Defense leadership.

"It is a strategic and moral imperative," he said.

Austin gave Pentagon officials 90 days to produce a plan for how civilian casualties can be reduced and avoided in combat operations, saying the experiences in Afghanistan and Iraq provide an opportunity to learn lessons and mitigate civilian harm in an institutional way.

The move came after several incidents placed a dark cloud over the Pentagon, most recently the erroneous killing of 10 people, including seven children, in a Kabul drone strike in August 2021 during the last days of the US presence in Afghanistan.

Likewise, the US military has been embarrassed by reporting by The New York Times that showed a poorly managed March 2019 bombing that killed some 70 civilians in the final days of the war against the Islamic State group.

The military avoided investigation and accountability in that incident, the Times said.

Austin's order came after a study of civilian death causes and reporting by RAND Corp, commissioned by the Pentagon, painted an unflattering picture of the US military's processes for dealing with such incidents.

It said that in planning strikes, the military focuses so much on the enemy that it neglects the broader civilian picture -- a problem that can lead to avoidable casualties.

And it says the military does not adequately and consistently investigate and record civilian death incidents, and does not have a central database that would permit study that could lead to solutions.

Investigations "are rarely done," said Michael McNerney, one of the Rand report's authors.

Furthermore, the data management on incidents, he said, were a "hot mess."

Rand also called for a review of how the military offers condolence of "ex gratia" payments to the families of those non-combatants killed as a result of US attacks.

McNerney said that payments are inconsistent, with some field commanders offering them and others not, and they had been used frequently for civilian deaths in Afghanistan but rarely in Iraq.

The Department of Defense "really needs to explain the purpose of these payments more clearly," he said.

"Are they only relevant to help US ground forces and support a commander on the ground, as some in Afghanistan used it for?" he asked.

"Or should the US use these payments as an acknowledgement of harm and as an accountability tool, because it's the right thing to do?"