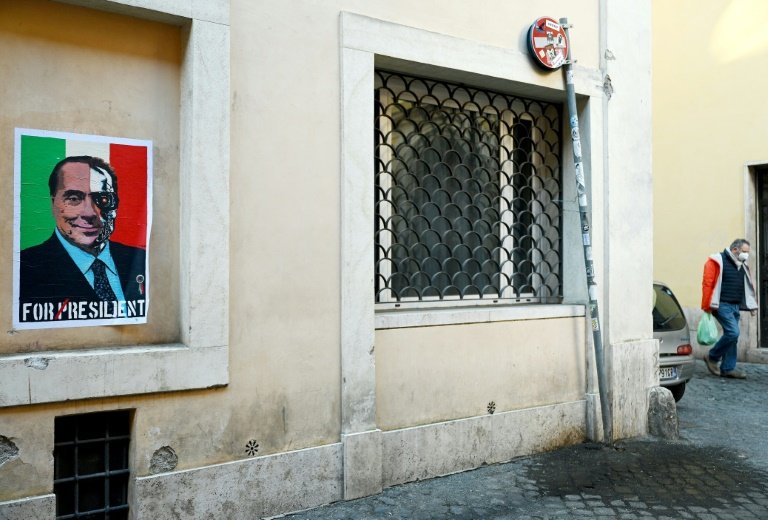 The 85-year-old media mogul, who is still embroiled in legal proceedings over his infamous "Bunga Bunga" sex parties, insisted he had the support in parliament to win -- something analysts doubted.

But in a statement issued to the media, he said he was withdrawing in the spirit of "national responsibility", to avoid further controversy.

Draghi, a former European Central Bank chief who has led Italy's coalition government for the past year, remains the favourite to be elected head of state next week.

The governing parties, which range from left to right, including Berlusconi's Forza Italia, have however yet to reach a deal -- and with voting secret, the result is notoriously hard to predict.

More than 1,000 MPs, senators and regional representatives will begin voting Monday, with several rounds -- each taking a day -- expected before a result.

Indicating he hopes to play the kingmaker, Berlusconi said he would work with his right-wing allies to agree a candidate that can summon a "broad consensus" -- but made clear it should not be Draghi.

He said the premier should stay to help implement structural reforms promised in return for almost 200 billion euros in European Union funds, on which Italy is relying for its post-virus recovery.

"I consider it necessary for the Draghi government to complete its work until the end of the legislature," in 2023, when the next general election is due, Berlusconi said.

Many analysts also worry Draghi's departure would spark a crisis in the government and that debt-laden Italy would slip behind on a tight schedule to implement reforms to the tax and justice systems and public administration.

However, others say Draghi would be better placed as president to ensure political stability and good relations with Brussels -- particularly should the far-right win the next general election.

While a largely ceremonial role, the president wields considerable power in times of political crises, from dissolving parliament to picking new prime ministers and denying mandates to fragile coalitions.

Berlusconi announced his decision at a virtual meeting with Matteo Salvini of the anti-immigration League party and Giorgia Meloni of the far-right Brothers of Italy.

He noted the ongoing coronavirus pandemic, saying: "Today, Italy needs unity.... I will continue to serve my country in other ways."

Salvini praised his "generous" decision which he said enabled them to propose candidates "without any more vetoes from the left".

Enrico Letta, leader of the centre-left Democratic Party, said the withdrawal had exposed a split in the right over Berlusconi's candidacy, adding: "Now we need a high-level agreement over a shared name and a legislative pact."

In the first three rounds, the winning candidate must secure two-thirds of the vote. From the fourth round, they only need an absolute majority.