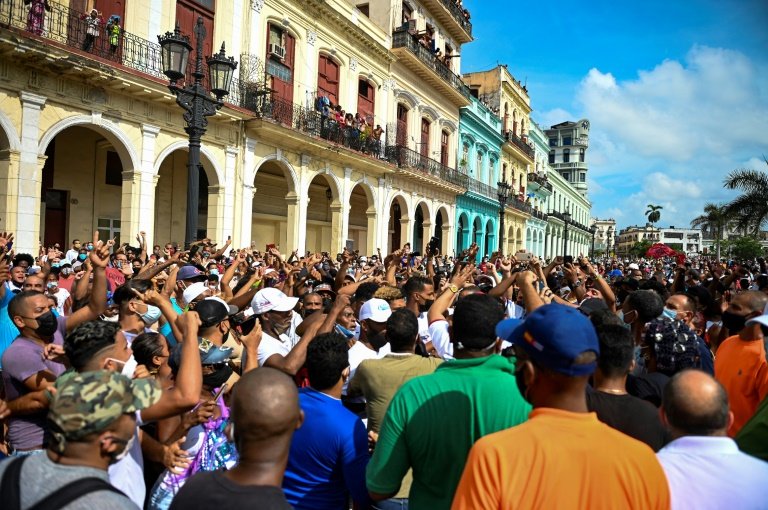 An anti-government demonstration in Havana, on July 11, 2021 -- Cuban artists have spearheaded an unprecedented protest movement to demand greater freedoms in the island nation / © AFP/File

Hundreds of artists and performers including Meryl Streep and Zadie Smith issued a joint call with international rights organizations Wednesday for the Cuban government to respect freedom of expression and release arbitrarily detained artists.

The Cuban government has staged an escalating crackdown on activists -- many of them artists -- who have led a wave of protests to demand more freedom since November 2020, reaching a crescendo this summer with mass marches across the island nation.

"Art should be free from censorship and repression, in Cuba and everywhere," the coalition wrote in an open letter also counting novelists Orhan Pamuk, Chimamanda Ngozi Adichie and Isabel Allende among its signatories.

"The Cuban government should immediately stop its unrelenting abuses against artists, release all arbitrarily detained artists, and drop all charges against them."

The letter, which was supported by Human Rights Watch, PEN International, and PEN America's Artists at Risk Connection highlights how central art and artists have been to the Cuban protest movement.

The song "Patria Y Vida" (Homeland and Life), a twist on the iconic revolutionary slogan "Patria O Muerte" (Homeland or Death) often used by Fidel Castro, has become a centerpiece at rallies and won this year's Latin Grammy for top song.

It was written by a group of Cuban artists including Maykel Osorbo, who has been imprisoned since May 2021.

According to the open letter, dozens more artists have reportedly been arrested, detained, or placed under house arrest. An unknown number remain in detention, with others under house arrest and subject to constant surveillance.

"There is no justification for persecuting artists for peacefully expressing their views," warned the letter.

Through mass detentions and widespread police presence, Cuban authorities have prevented a repeat of the mass gatherings seen over the summer.

Authorities detained Yunior Garcia, a prominent leader of the protest movement, as they moved to block a major demonstration planned for November. The actor and playwright flew to Spain with his wife shortly after, citing pressure from Cuban authorities.

The protest movement arose against the backdrop of a dire economic crisis in Cuba, suffering from the collapse of tourism during the Covid-19 pandemic as well as broad US sanctions imposed under former president Donald Trump.