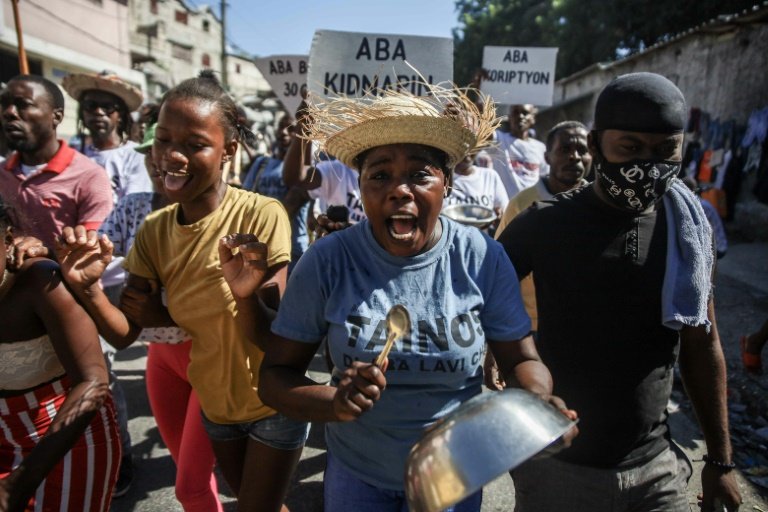 Three more of the 17 North Americans kidnapped in Haiti in October have been freed, their church group said on Monday.

The missionaries and family members -- a group of 16 Americans and one Canadian -- were abducted while returning from an orphanage in an area east of the capital Port-au-Prince controlled by one of Haiti's most powerful crime gangs.

Two of them were released in November, leaving 12 currently still in captivity.

Christian Aid Ministries, which is based in the US state of Ohio, has said the hostages were 12 adults aged 18 to 48, and five children ranging in age from eight months to 15 years.

"We are thankful to God that three more hostages were released last night," the church group said in a statement, noting the three "are safe and seem to be in good spirits."

The group did not provide further details on their identities or age, or how they were released.

The gang "400 Mawozo" was behind the October 16 kidnapping and had demanded a ransom of one million dollars per head, sources told AFP.

FBI agents, Haitian authorities and the anti-kidnapping unit of the national police have been negotiating with the kidnappers.

"We're continuing to work at the highest levels... to do everything we can to see to it that the remaining hostages are released as soon as possible," said US State Department spokesman Ned Price.

Since December 2020, Haitian police have sought the gang's leader, Wilson Joseph, for crimes including assassination, kidnapping, vehicle theft and hijacking of cargo trucks.

The US State Department travel advisory warns US citizens to avoid visiting the Caribbean nation, noting "kidnapping is widespread and victims regularly include US citizens."

Previously confined to the poorer districts of the capital, gangs have recently extended their reach and increased the number of kidnappings, as the country -- already struggling with a yearslong social and economic crisis -- was hit by a presidential assassination and a major earthquake.

Hundreds of people have been kidnapped for ransom since January in Haiti, according to the Center for Analysis and Research in Human Rights (CARDH).

In April, 10 people, including two French clerics, were kidnapped and held for 20 days by 400 Mawozo in the same region.