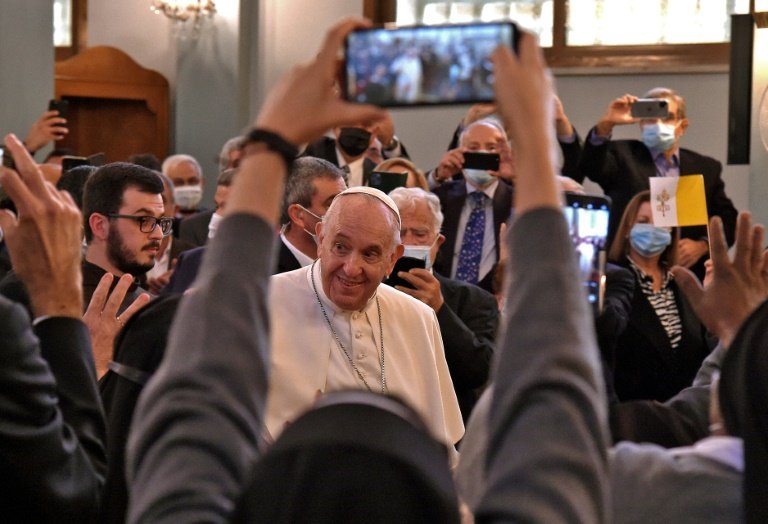 Pope Francis on Thursday urged unity as Europe faces an influx of refugees and migrants, speaking on the divided Mediterranean island of Cyprus, a major destination for people fleeing war and poverty.

"We need to welcome and integrate one another and to walk together as brothers and sisters, all of us," said the pontiff, 84, at the start of a five-day trip that takes him to Greece from Saturday.

The pope was set to underscore his message by taking 50 migrants now in Cyprus to Italy, Cypriot President Nicos Anastasiades said, although the Vatican has yet to confirm the initiative.

Francis -- on his 35th international trip since becoming pope in 2013 -- is the second Catholic pontiff to visit Cyprus after Benedict XVI went in 2010.

Speaking in a Maronite church in Nicosia, the pope said "the presence of many of our migrant brothers and sisters" had made Cyprus "a true point of encounter between different ethnicities and cultures".

The island's experience served as a reminder to Europe that "we need to work together to build a future worthy of humanity, to overcome divisions, to break down walls, to dream and work for unity," he said. 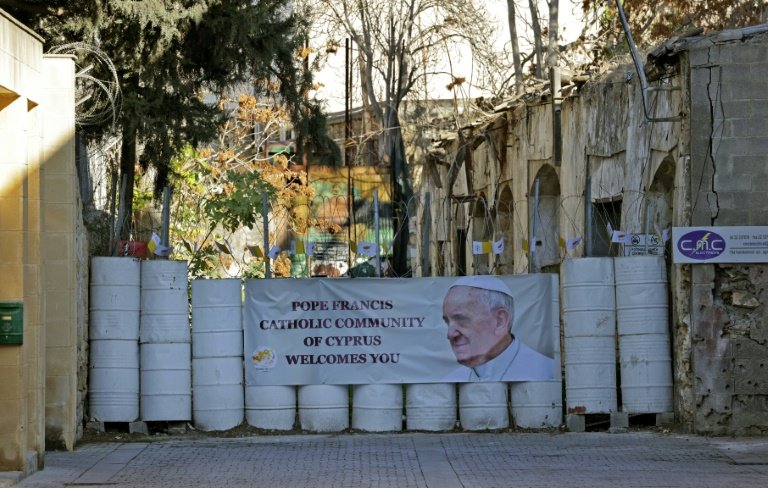 A banner welcomes Pope Francis, at the edge of the UN-patrolled buffer zone in Cyprus' divided capital Nicosia near the city's Catholic church / © AFP

Later, in a meeting with Anastasiades, he cautioned against nationalist "walls of fear" in Europe and stressed the continent "needs reconciliation and unity".

Cyprus, a country of one million people, is home to about 25,000 Catholics, including Maronites whose ancestors arrived from Syria and Lebanon and overseas workers from the Philippines, South Asia and African countries.

"We're such a small minority so it's great to feel that you belong to a greater family, the Catholic family," said Eliana Maltezou, 38, holding her one-year-old son and waving a Cypriot flag.

Cyprus has been divided since 1974 when Turkish forces invaded and occupied its northern third in response to a coup sponsored by the Greek junta in power at the time. 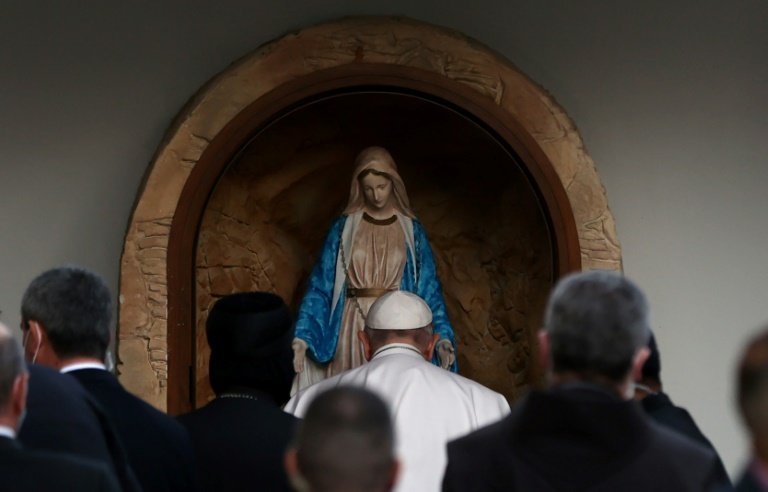 Only Ankara recognises the self-proclaimed Turkish Republic of Northern Cyprus and tensions simmer between the two sides.

The division saw about 200,000 people, including many Maronites from the north, displaced from their homes.

Monica Despoti, 55, whose Maronite village Asomatos is in the north, said the pope's visit meant "we're very, very happy and we also have a hope that with his help we can go back to our motherland".

The majority-Greek speaking south accuses the north of sending migrants across the UN-patrolled Green Line and also says it receives the highest number of first-time asylum seekers of any EU member country. 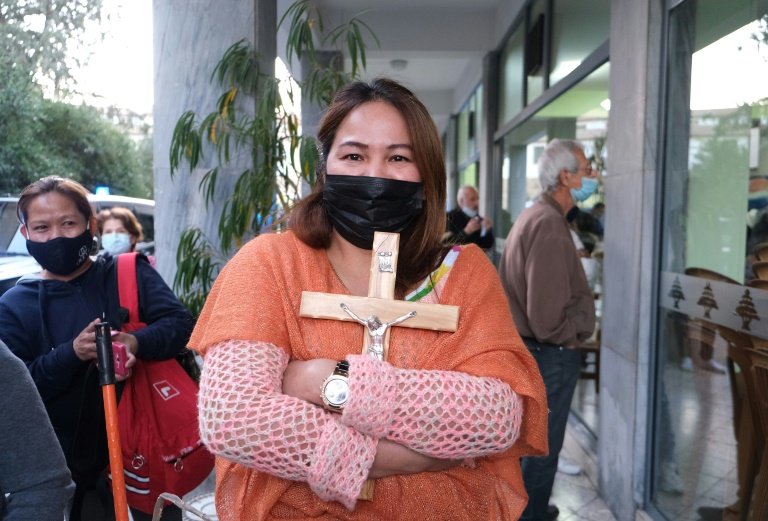 The pope, who has long called for better protection for migrants, in remarks ahead of the trip described the Mediterranean Sea as a "huge cemetery" for migrants who drowned.

At the church, the pope listened as Nyein Nyein Loo, of the Sisters of St Joseph of the Apparition, spoke about the Christian community's charitable work for migrants.

"Much of our work consists in defending the basic human rights of those in need and of migrant workers," she said, detailing that many face "harsh and unfair treatment, including unpaid wages, excessively long working hours, verbal and physical abuse and other forms of discrimination".

Before his departure from Rome, Francis met refugees from Syria, Congo, Somalia and Afghanistan who had come via the Greek island of Lesbos and now live in Italy.

On the plane, a journalist gave him framed fabric pieces of migrant tents from the French port of Calais with the message: "To all the exiled people who died on the Franco-British border."

According to Cypriot authorities, negotiations are underway with the Vatican to organise the transfer to Rome of several migrant families now in Cyprus. 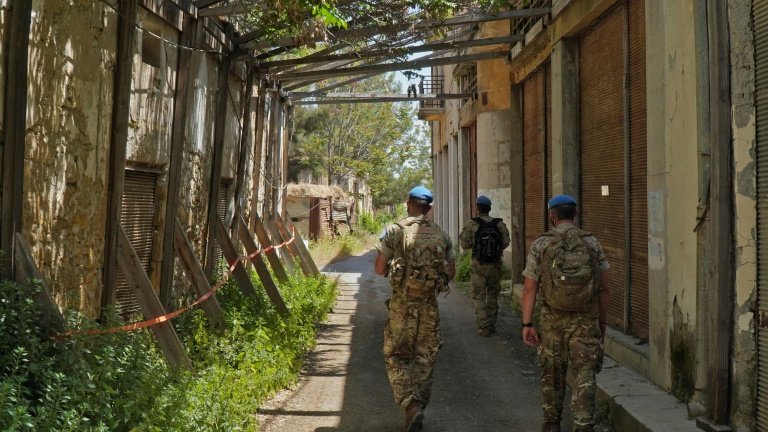 In this photo from April 26, 2021, UN peacekeepers patrol inside the buffer zone that separates the internationally-recognised Republic of Cyprus and the breakaway Turkish Republic of Northern Cyprus / © AFP/File

That would repeat a gesture Francis made on Lesbos in 2016 when he returned to the Vatican with three Syrian Muslim families who had fled bombing in their homeland.

Francis said "the greatest wound suffered by this land has been the terrible laceration it has endured in recent decades. I think of the deep suffering of all those people unable to return to their homes and their places of worship. 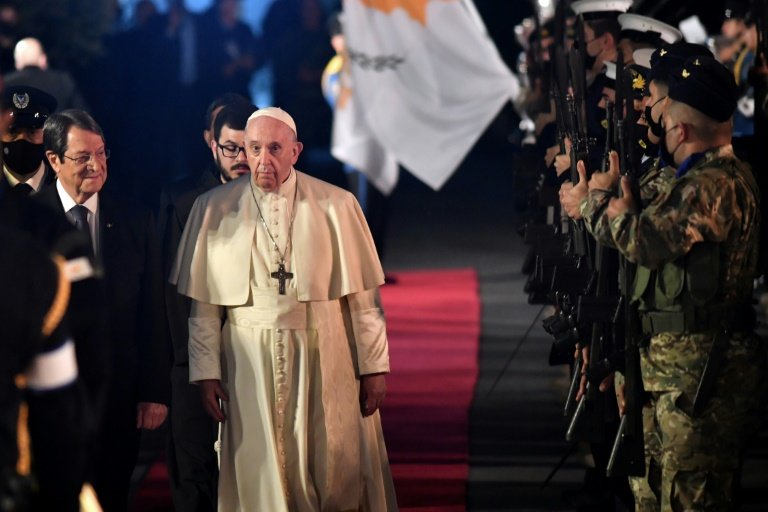 "The way of peace, which reconciles conflicts and regenerates the beauty of fraternity, has a single word as its signpost. That word is dialogue."

Turkish Cypriot leader Ersin Tatar, meanwhile, accused the south of seeking to use the trip to score "political goals against Turkey and the Turkish Republic of Northern Cyprus".

It was a "source of sorrow for us that Pope Francis will visit Greek Cyprus only," he said.

"There are two peoples in Cyprus. Not only Christian Greeks but also Muslim Turks live in Cyprus. This is one of the basic realities of Cyprus."