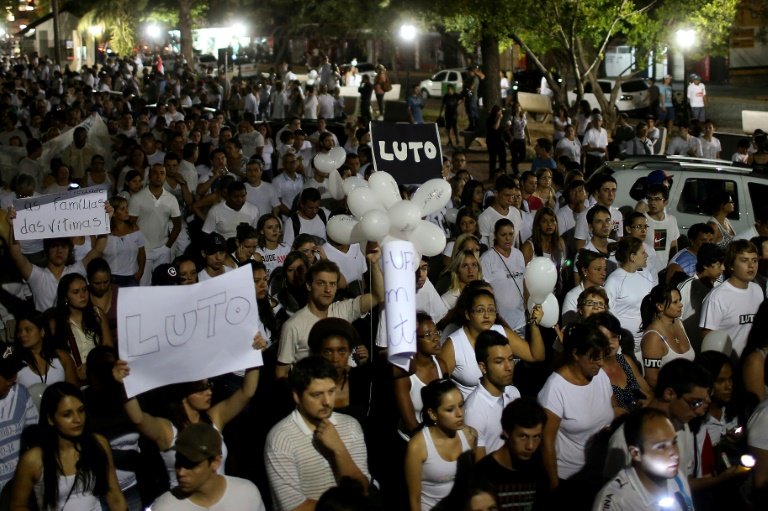 A trial opened in Brazil Wednesday for four people charged over a devastating nightclub fire that killed 242 revelers, mainly young party-goers, in a southern college town nearly nine years ago.

The four defendants -- two members of the music band performing at a university party on January 27, 2013, and two owners of the Kiss nightclub in Santa Maria -- face 242 charges of homicide and 636 of attempted homicide.

A police investigation concluded the fire started when sparks from a flare lit by the singer of the band "Gurizada Fandangueira" ignited the insulating material of the club's ceiling, releasing lethal fumes and turning the venue into a death trap.

Pyrotechnics are prohibited in enclosed spaces in Brazil.

Some people burned to death, while others were asphyxiated.

The probe found the venue had no functioning fire extinguishers, only two doors for evacuating people from an overcrowded dance floor and poor emergency signage.

More than 600 people were injured.

"I am not a killer," one of the accused, music producer Luciano Bonilha Leao, 44, shouted tearfully as he entered the courtroom.

The jury trial in Porto Alegre in southern Brazil will hear evidence from 14 survivors and 19 other witnesses.

The band members are also accused of fleeing the scene without alerting party-goers, despite having access to the sound system.

Survivor Katia Giane Pacheco Siqueira, a former Kiss employee, cried as she told the court of the 21 days she spent in hospital with burns on 40 percent of her body.

"I was screaming that I do not want to die," she recounted of the fire itself, and said the policy of the nightclub was: "the more people inside, the better."

The four defendants spent several months in pre-trial detention before being freed while awaiting trial.

In a video posted on Facebook, Rosane and Paulo Callegaro remembered their son Ruan, who died in the fire when he was just 20.

"Our fear was always the street, but no, the danger was inside, for a lack of responsibility, for omission and for profit," said Ruan's mother, pleading for justice.

"What happened was not an accident."

The trial is expected to last about two weeks.