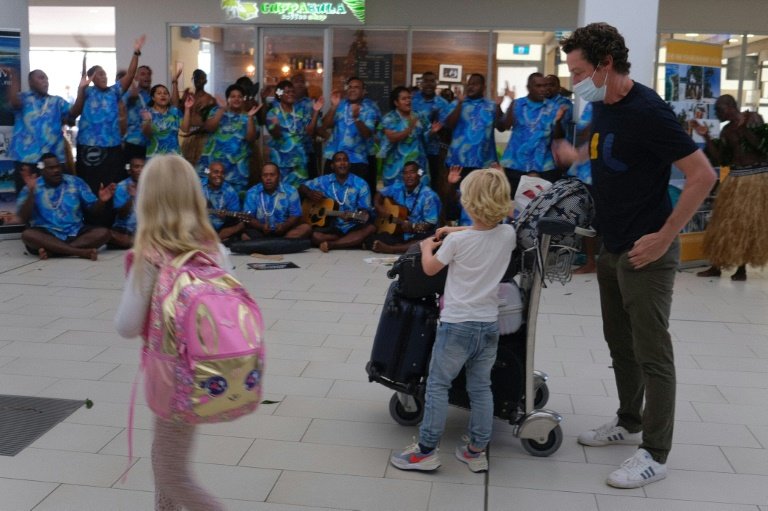 Holidaymakers are greeted by traditional cultural groups as Fiji opens its borders to international travellers for the first time since the Covid-19 pandemic swept the globe and devastated its tourism-reliant economy. / © TOURISM FIJI/AFP

Grass-skirted traditional dancers welcomed elated holidaymakers back to Fiji Wednesday, as the South Pacific nation opened its borders to international travellers for the first time since the pandemic began.

Fiji Airways flight FJ914 from Sydney touched down at Nadi airport at 11.40am (2340 Tuesday GMT), ending 615 days of international isolation for the tourism-dependent economy.

As the plane taxied down the runway, two fire engines lined up and aimed their hoses in the air to honour it with a water salute.

Face coverings obscured the beaming smiles as travellers, some carrying surfboards, made their way through the terminal but cries of "bula" (hello) and Indigenous songs of celebration reverberated around the building.

Australian couple Matthew Brickwood and Danielle Connelly were the first of the 200-plus passengers to clear customs, telling AFP: "Ever since we heard Fiji was opening for its first flight, we decided to just head here."

Fiji Airways chief executive Andre Viljoen said it was a "momentous" occasion after a tough 20 months for the tropical bucket-list destination, where tourism accounts for about 40 percent of the economy. 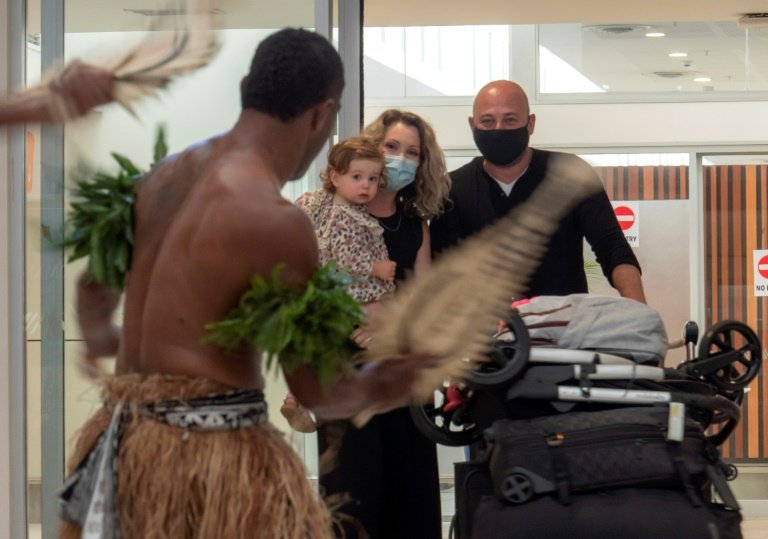 Viljoen said strict health measures were in place to contain Covid-19 and the recent emergence of the Omicron variant had not deterred passengers.

"Flights are coming in at full capacity," he said.

Fiji has tightened restrictions on arrivals from southern Africa but made no changes to rules surrounding "travel partner" countries, whose citizens can now experience a tropical getaway in the Pacific idyll.

They include New Zealand, the United States and France, as well as countries where Omicron has been detected like Japan, Australia, Canada and Britain.

Tourism Fiji chief executive Brent Hill said resorts on the two main islands of Viti Levu and Vanua Levu were gearing up for an influx of foreign travellers.

"We've noted around 75,000 bookings for the next couple of months, which is outstanding," he said.

"We know our job has just started and we look forward to seeing more tourists coming in 2022."

Foreign visitors need to be fully vaccinated and test negative for Covid-19 prior to departure, as well as providing a 14-day travel history to ensure they have not visited virus hotspots.

Once in Fiji, they must stay in designated zones where all contacts, from hospitality staff to tour operators, will be double jabbed.

Fiji managed to eliminate Covid-19 for 12 months before a devastating second wave of the Delta variant earlier this year caused almost 700 deaths in the nation of one million.

But infections have dropped as Fiji's vaccination rate climbs over 90 percent, with one death and a few dozen infections reported in the past week.

Australian Kristen Abramovich, travelling with her husband and daughter, said the safety protocols allowed her to holiday with confidence.

"The vaccination rate here is as good as back home, so I'm not fearing the new strain of virus too much," she told AFP.

Fiji Prime Minister Frank Bainimarama this week described the return of tourism as a lifeline for a country battling "the strongest economic headwinds we have ever faced" because of the pandemic.