In Bishkek, there was little sign of excitement about the vote, which is expected to deliver a 90-seat parliament largely loyal to President Sadyr Japarov / © AFP/File

Kyrgyzstan went to parliamentary polls Sunday as tensions simmer after claims of a plot to unseat populist President Sadyr Japarov, who rose to power in post-vote unrest last year.

In three decades of independence, the impoverished ex-Soviet Central Asian nation has become a byword for volatility, with three presidents unseated during street protests fuelled by a combination of corruption, crackdowns and anger over perceived election irregularities.

While opinion polls show that Japarov's government still enjoys popular support, critics say the recent jailing of potential rivals and a constitutional overhaul earlier this year show he is repeating the mistakes of predecessors.

His cash-strapped government also faces a difficult future, with a winter energy crisis looming, living costs rising and trade with next-door China hammered by the pandemic. In the capital Bishkek, where both Russian and Kyrgyz are spoken, there was little sign of excitement about the vote, which is expected to deliver a 90-seat parliament largely loyal to Japarov.

"Our country is very beautiful. I want our elections to be cultured and honest, for us to live in a real country," said a 58-year-old voter who gave her first name, Lyudmila.

But Lyudmila said she had already been offered cash in exchange for her vote.

A 36-year-old voter called Ulugbek Abdrashev said he would be voting for the opposition Ata-Meken party, and expressed hope that the next parliament would be more vocal than the outgoing legislature.

It was impossible to discount further unrest after the vote, he said.

"Everything is possible here. We (live) in a Wonderland," he told AFP, laughing.

Polling stations in the mountainous, land-locked country of 6.5 million opened at 8:00 am (0200 GMT) on Sunday with first results expected shortly after counting starts at 8:00 pm.

Kyrgyzstan's most recent round of instability came after parliamentary elections a year ago, when losing parties took to the streets to denounce a vote they said was rigged in favour of parties close to then-president Sooronbay Jeenbekov.

The vote results were annulled and current leader Japarov, freed from prison during the unrest, was elected president in January.

Japarov voted at a polling station in Bishkek in the morning with his wife Aigul Japarova and called on others to do the same. 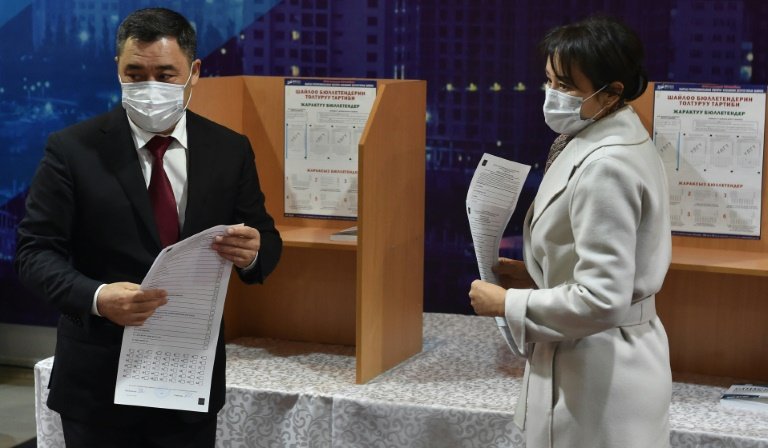 "The future of the country depends on your vote," he said, after casting his ballot.

The Central Election Commission reported a turnout of just over 16 percent at the halfway stage of the vote.

Having cemented power by overseeing constitutional changes that stripped away single-term limits for sitting presidents and strengthened his office at the legislature's expense, Japarov pledged to "show the world" Kyrgyzstan can hold free and fair elections.

But opposition candidates have complained of administrative pressure.

One popular independent lawmaker, Ryskeldi Mombekov, was removed from the race by electoral authorities before his candidacy was reinstated by a judge as supporters from his home region threatened to rally.

More seriously, the state committee for national security said Friday it was detaining 15 people involved in what it claimed was a plot to overthrow the government involving "lawmakers and high-ranking former officials".

The statement did not mention whom authorities had arrested. Erkin Bulekbayev, leader of the fringe Green Party, told AFP that three of his candidates were among the defendants remanded in custody by a court late on Saturday in connection with the secretive investigation.

Japarov does not have a party in the race, although several well-funded alliances are headed by politicians loyal to him.

At a meeting of the security council on Friday, Japarov acknowledged that the country could face an energy collapse at "any moment" and blamed corruption and outdated equipment in the hydropower-fed sector for the problem.

The outcome of the vote will be keenly watched by close partner Russia, which pledged support for the new government after initially criticising the political chaos that brought Japarov to power.