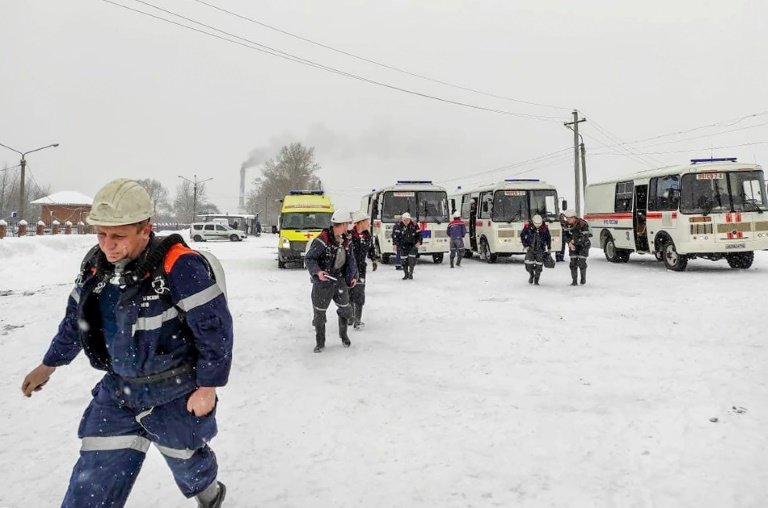 There were 285 people inside the Listvyazhnaya coal mine, in the Kemerovo region near the town of Belovo, when the accident occurred / © RUSSIAN EMERGENCY SITUATIONS MINISTRY/AFP/File

A Siberian mining region began three days of mourning on Friday after officials said 52 people died in a coal mine accident and a rescue effort ended in tragedy.

Investigators have launched a series of probes into the disaster at the Listvyazhnaya mine in the Keremovo region, the worst mining accident in Russia in more than a decade.

Officials said the mine had filled with smoke in the early hours of Thursday after an apparent gas explosion.

Fifty-two people were killed, the emergencies ministry said on Friday, including six rescuers who had been part of a search operation.

"This is a huge tragedy for the entire country and the Russian emergencies ministry," acting minister Alexander Chupriyan said in a statement.

"Rescuers, just like miners, did their duty to the end," he said, and their names "will remain forever in our memory."

The rescuers were to be given the Order of Courage -- one of Russia's top awards -- posthumously, the ministry said.

Chupriyan said in televised remarks on Friday that another person had been found alive. No more details were immediately available.

There were 285 people in the mine when it began to fill with smoke on Thursday and miners described a frantic scramble to evacuate.

"I might have lost consciousness," one worker told Rossiya 24 state television. "I don't know how much time passed."

"I stretched out my hands, they couldn't find me on their own, because the visibility was bad," another said. "They grabbed me... I didn't understand who it was and where they were pulling me."

Officials said it appeared the accident had been caused by a methane explosion. The search and rescue operation launched on Thursday had to be called off after several hours because of fears of another blast.

Regional authorities said six bodies -- including those of three miners -- had been brought to the surface. Nearly 50 people were hospitalised.

The Investigative Committee, which probes major incidents, opened a criminal case and said three people had been detained including the 47-year-old director of the mine and his 59-year-old first deputy.

"During the initial investigation, it was established that the detainees violated industrial safety requirements," the committee said in a statement.

On Friday, investigators opened another probe against two officials of the local branch of state safety watchdog Rostekhnadzor, accusing them of failing to conduct proper inspections of the mine.

The governor declared a three-day mourning period in the region beginning Friday.

On Thursday, residents of the village of Gramoteino next to the mine had gathered in snowfall and sub-zero temperatures outside the entrance to the facility, which was closed off with a boom gate, as ambulances passed in and out.

The Listvyazhnaya mine, near the town of Belovo, was set up in 1956 and is owned by the SDS-Ugol company based in the city of Kemerovo.

A methane blast in 2004 killed 13 people at the mine and another explosion at the site killed five people in 1981.

Mining accidents are fairly common in Russia and across the former Soviet Union as a result of poor safety standards, a lack of oversight of working conditions and ageing Soviet-era equipment.

One of the deadliest mining accidents in Russia in recent years occurred at the Raspadskaya mine in Siberia -- Russia's largest coal mine -- in the summer of 2010, killing 91 people and leaving more than 100 injured.

The incident was the result of a methane explosion when more than 300 miners were inside. A second explosion then trapped a group of rescuers.

In 2007, 110 people died after a gas explosion at the Ulyanovskaya mine, in the same region.

On top of the deadly accidents, activists have drawn attention to the environmental practices of mines in Russia, one of the world's largest mineral producers