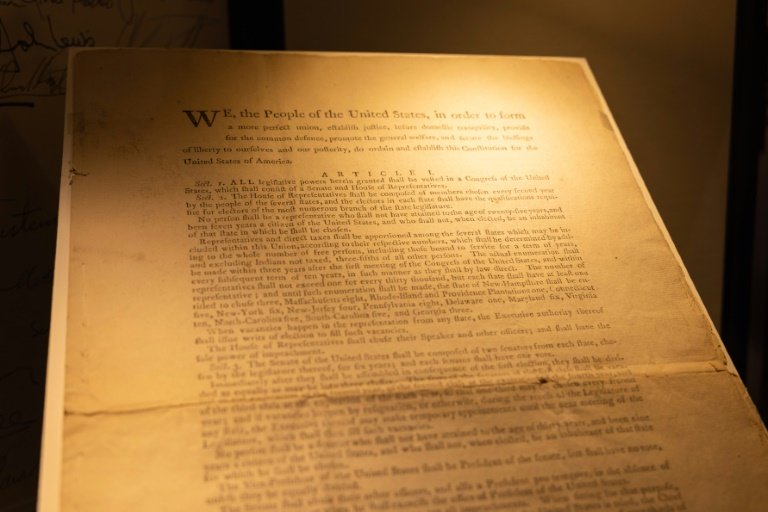 An extremely rare original copy of the US Constitution sold Thursday for $43 million -- a world record for a historical document at auction -- with a cryptocurrency consortium that coveted the text outbid by another investor.

Sotheby's auction house, which staged the sale, said the item was one of only 13 known surviving copies of the US charter, signed on September 17, 1787 at Philadelphia's Independence Hall by America's founding fathers including George Washington, Benjamin Franklin and James Madison.

The winning bidder was not immediately identified.

A group of cryptocurrency investors had raised $40 million to try to buy the document but failed to secure the prize, the consortium said.

"We didn't get the constitution, but we made history nonetheless" the group, ConstitutionDAO, said on Twitter.

"We broke the record for the largest crowdfund for a physical object and most money crowdfunded in 72h, which will of course be refunded to everyone who participated," it said.

A Sotheby's spokesman said the sale -- for $43.2 million including commissions -- was a world record for a historical document offered at auction.

Selby Kiffer, a manuscripts and ancient books expert at Sotheby's, said in September that this copy was probably part of an edition of 500 printed the day before the signing, and likely came off the printing presses on the evening of September 16 1787.

The text, with its celebrated opening of "We the People of the United States, in Order to form a more perfect Union," went on to be ratified by the individual states, starting with Delaware in December 1787 and ending with Rhode Island in May 1790.

It officially became the United States' founding charter on June 21, 1788, when New Hampshire became the ninth of 13 states to ratify it.

The original copy sold Thursday -- one of just two still in private hands, in this case the US collector Dorothy Tapper Goldman -- was estimated last September at between $15 and $20 million.

In the end it went for more than twice that sum, and in just eight minutes as bidders in the New York auction room but also on the phone from around the globe upped their offers.

The cryptocurrency consortium that sought the rare document called itself ConstitutionDAO, the last three letters standing for "decentralized autonomous organization."

It had raised some $40 million in the cryptocurrency ethereum in recent days, but fell short at the auction. According to its Twitter account, it had more than 17,000 contributors.

Such groups have begun forming loose coalitions recently to raise funds to bid on expensive collectibles, including one group that pulled together $4 million for a rare Wu-Tang Clan album that had previously been owned by jailed hedge fund founder Martin Shkreli.