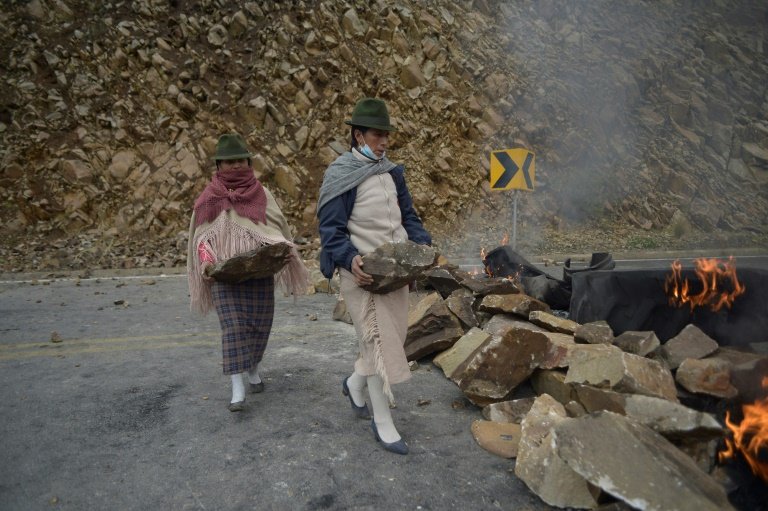 Thousands of Ecuadorans took to the streets throughout the country Tuesday, blocking roads with rocks and burning tires in protests called by indigenous organizations over soaring fuel prices as the country grapples with a state of emergency and battles challenges on multiple fronts.

The Confederation of Indigenous Nationalities of Ecuador (Conaie) called for the disruptions, with some 1,500 people showing up to protest in the capital of Quito, according to police chief Cesar Zapata.

"I came for my three children, who have been unemployed since last year. They helped me to eat and we are all suffering, we are desperate," 58-year-old Maria Elena Ponce told AFP.

The government had warned it would move to "prevent the closure of roads" to passengers and goods, and police and soldiers were deployed countrywide to monitor protesters.

By late afternoon, clashes had erupted near the cordoned-off presidential palace between rock-throwing protesters and police, who responded by firing tear gas. 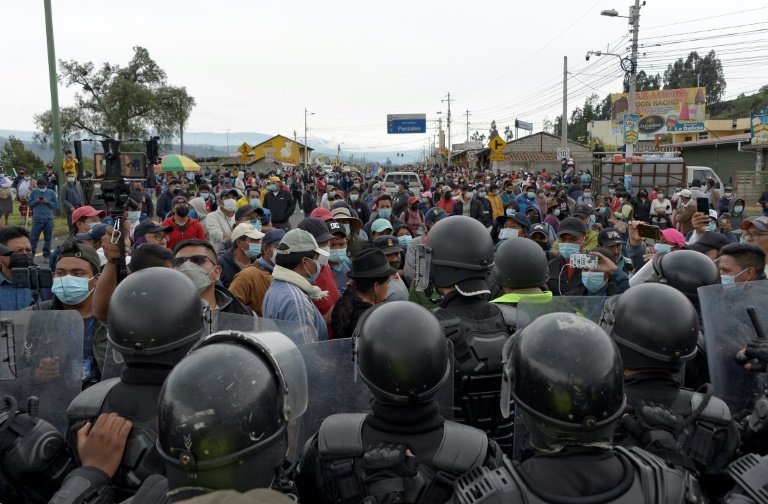 Under a state of emergency decreed last week, Ecuador has deployed soldiers in support of police fighting a wave of violent crime / © AFP

Authorities said at least 37 arrests had been made, five police officers wounded and that two soldiers who were captured by protesters in an Andean village were in good health.

One young protester was injured on the forehead after being hit with a tear gas canister, according to an AFP journalist, while press freedom organization Fundamedios said a reporter had been hit in the leg by a rubber bullet fired by police.

The unrest comes as Ecuador simultaneously battles economic collapse worsened by the coronavirus pandemic, widespread popular discontent, violent crime blamed on drug gangs, and corruption allegations against President Guillermo Lasso, an ex-banker whose center-right economic policies are viewed with suspicion by many.

"The security forces will see to it that law and order is respected," insisted presidency spokesman Carlos Jijon, building on Lasso's earlier vow to prevent road closures. 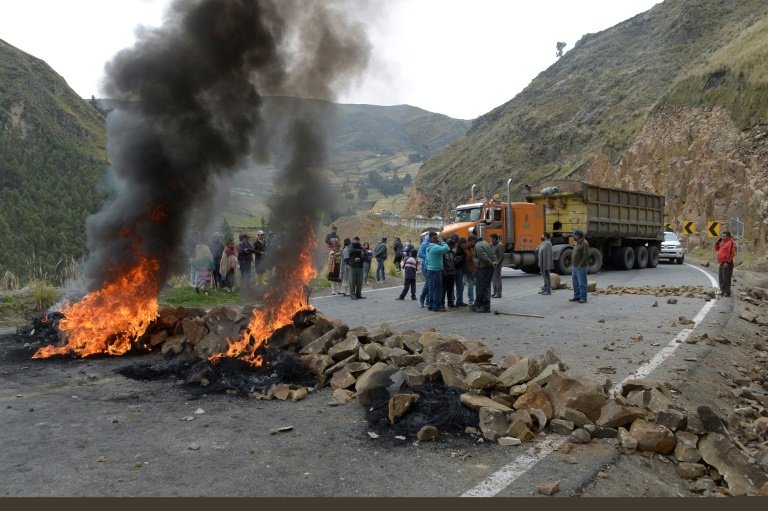 President Guillermo Lasso Lasso, facing the largest protests since taking office, has warned the government would move to 'prevent the closure of roads / © AFP

But demonstrators have not been deterred.

"We have collectively taken this decision (to protest) in the face of the new economic measures that are increasingly crushing our populations, our transport workers and our communities," protest organizer Julio Cesar Pilalumbo told AFP.

"We will resist and we will not give in to any repression," he said at a roadblock in Zumbahua in central Ecuador, where poncho-wearing women armed with spades and sticks helped men move large stones to block traffic.

Lasso tweeted that the protest "paralysis" meant "economic losses for small businesses, which sustain thousands of Ecuadoran families and households."

He vowed it would be the last increase, but this was not enough to assuage anger with economic policy in a country that exports oil but imports much of the fuel it consumes. 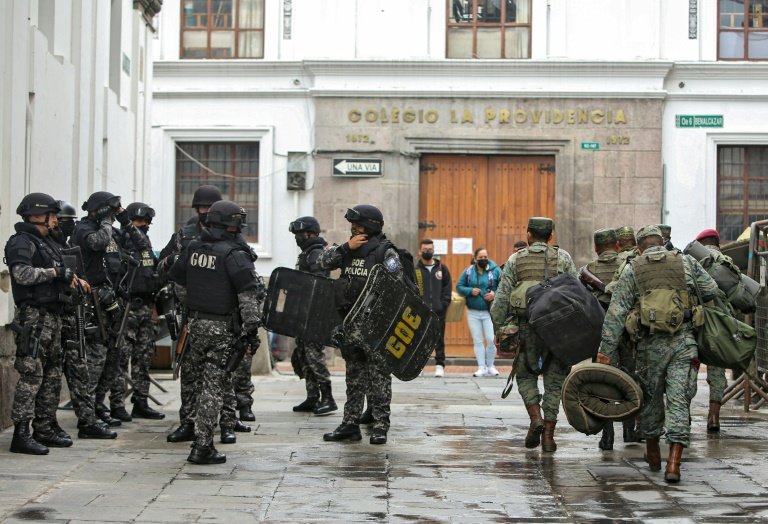 Police and soldiers were deployed ahead of the planned protest / © AFP

Protesters under the umbrella of the Confederation of Indigenous Nationalities of Ecuador (Conaie) want the price capped at $1.50 for diesel and $2 for petrol.

Conaie is credited with helping topple three presidents between 1997 and 2005, and in 2019 led successful protests against the government's scrapping of fuel subsidies.

Labor unions and students were invited to join Tuesday's action, with Lasso facing the largest protests since taking office in May.

He had declared a 60-day state of emergency last week to tackle rising crime and violence blamed on duelling drug traffickers in the country nestled between the world's two biggest cocaine producers: Colombia and Peru.

The state of emergency, decreed after some 240 gang-aligned inmates were killed in horrific prison clashes since January, allows for deployment of troops to help fight a crime wave that last week also claimed Ecuador's 200m sprint world bronze medalist Alex Quinonez in a shooting in Guayaquil.

Ecuador's economic spiral has been aggravated by the pandemic, with external debt at almost $46 billion, or 45 percent of GDP.

Poverty affects about 47 percent of Ecuadorans; nearly a third do not have full-time work.

Teacher Fabiola Gualotuna, among the protesters in Zumbahua, said she felt let down by Lasso.

"He said he is going to raise teachers' salaries," she told AFP. "Some of us teachers travel seven or eight kilometers and earn a pittance. It is not fair."

Lasso is facing a parliamentary investigation over Pandora Papers revelations that he allegedly hid millions in assets overseas.