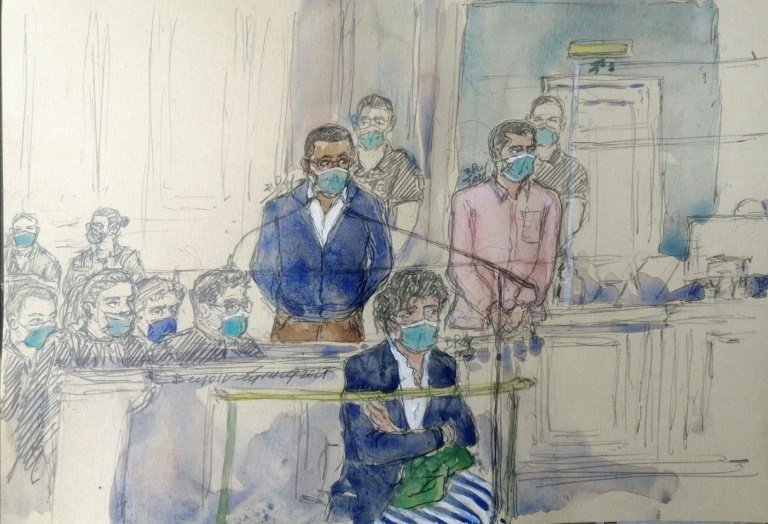 Two men went on trial on Tuesday over the 2018 murder of an elderly Jewish woman that provoked protests and alarm in France about anti-Semitic crime.

The partly burned body of Mireille Knoll, 85, was found in her apartment in central Paris after she had been stabbed 11 times before her home was set on fire.

President Emmanuel Macron attended the funeral of the survivor of a notorious 1942 roundup of more than 13,000 Jews in Paris during World War II which she escaped by fleeing with her mother to Portugal.

Two men have been charged with her killing, a 25-year-old homeless man with psychiatric problems and the 31-year-old son of one of Kroll's neighbours.

The pair, who met in prison and have past convictions for theft and violence, both deny killing the frail and immobile grandmother and each blames the other for her death.

"We will need a miracle for the truth to come out of their mouths," Gilles-William Goldnadel, a lawyer acting for Knoll's family, told reporters as he entered the court, adding that it was a case of "anti-Semitism motivated by financial gain".

Prosecutors are treating the murder as an anti-Semitic hate crime because one of the suspects, Alex Carrimbacus, said he had overheard co-accused Yacine Mihoub "talking about Jews' money and their wealth".

He also claimed Mihoub shouted "Allahu akbar" ("God is greatest") while stabbing her.

The investigation had shown Mihoub had an "ambivalent" attitude towards Islamic extremism, prosecutors claim.

Mihoub's lawyer, Charles Consigny, denied any anti-Semitic motive, adding that the idea that his client was an Islamist "doesn't hold up for one second."

He said prosecutors had not "had the courage to abandon the anti-Semitic motive because of the pressure of public opinion".

Speaking about Knoll shortly after her death, Macron had said her killer had "murdered an innocent and vulnerable woman because she was Jewish and in doing so had sullied our most sacred values and our memory."

Both Mihoub, 31, and Carrimbacus, 25, were present in the Paris court for the trial which is due to last until November 10.

The murder was the latest in a series of attacks that have horrified France's 500,000-strong Jewish community and exacerbated concern about how rising Islamic extremism is fuelling anti-Semitism. 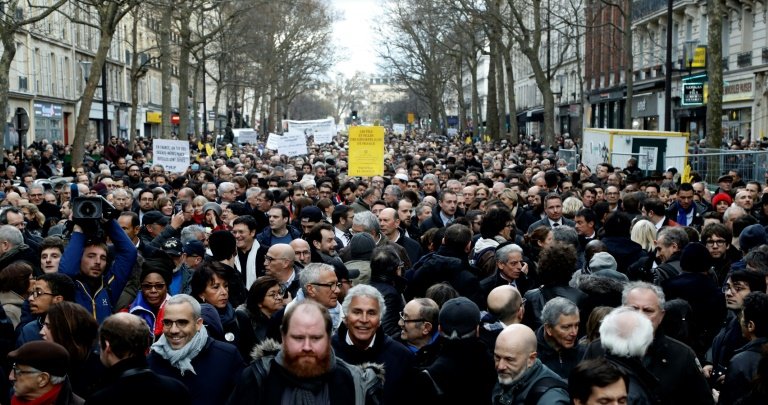 An estimated 30,000 people took part in a silent march in memory of Mireille Knoll on March 28 2018, that was attended by government ministers and the heads of France's political parties / © AFP

An estimated 30,000 people took part in a silent march in her memory in March 2018 that was attended by government ministers and the heads of France's political parties.

One of the organisers, Sabrina Moise, said at that the time that she felt it was "no longer safe for Jews because of galloping anti-Semitism."

In 2012, Islamist gunman Mohamed Merah shot dead three children and a teacher at a Jewish school in the southwestern city of Toulouse.

Three years later, a gunman killed four people in a hostage-taking at a Jewish supermarket in the French capital.

And in 2017, an Orthodox Jewish woman in her sixties, Sarah Halimi, was thrown out of the window of her Paris flat by a neighbour shouting "Allahu akbar".

France's highest court ruled in April that the killer in that case, Kobili Traore, was not criminally responsible after succumbing to a "delirious fit" under the influence of drugs and could not go on trial.

That ruling infuriated the victim's family as well as Jewish groups, and prompted Macron to urge a change in French law to ensure people face responsibility for violent crimes while under the influence of drugs.

It also prompted protests in France and Israel.