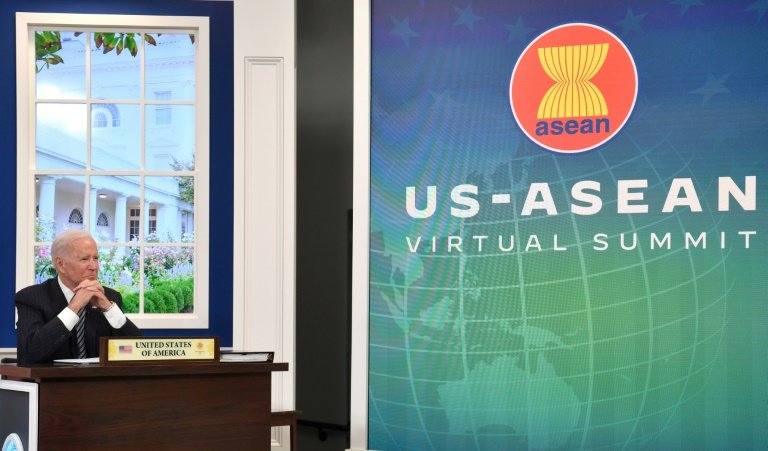 US President Joe Biden on Tuesday denounced the military coup and "horrific violence" in Myanmar at a summit with ASEAN leaders, the White House said.

Addressing the virtual summit, Biden "expressed grave concerns about the military coup and horrific violence in Burma and called on the country's military regime to immediately end the violence, release those unjustly detained, and restore Burma's path to democracy," a statement said.

Myanmar's military government boycotted the ASEAN summit, which was hosted by Brunei, after its chief was banned in response to the February power grab and subsequent deadly crackdown on dissent.

The strongly worded White House statement came after Biden made public opening remarks to the ASEAN meeting in which he made a veiled reference to countering China, but did not mention Myanmar.

Speaking by video link from the White House, Biden called the Association of Southeast Asian Nations "essential" and said the United States is "committed to ASEAN's centrality."

The United States is not a member of the 10-nation body but sees ASEAN as an important component in its strategy to push back against an increasingly assertive Chinese diplomatic, commercial and military presence across Asia.

Biden, who has held two phone calls with Chinese President Xi Jinping since becoming president and is also planning a virtual summit later this year, did not refer directly to Beijing.

However, his focus was clear, calling ASEAN "a lynchpin" in maintaining a region "where every country can compete and succeed on a level playing field and all nations, no matter how big or powerful, abide by the law."

The US-ASEAN "partnership is essential in maintaining a free and open Indo-Pacific which has been the foundation of our shared security and prosperity for many decades," Biden said.

"The United States strongly supports the ASEAN outlook on the Indo-Pacific and the rules based international order."