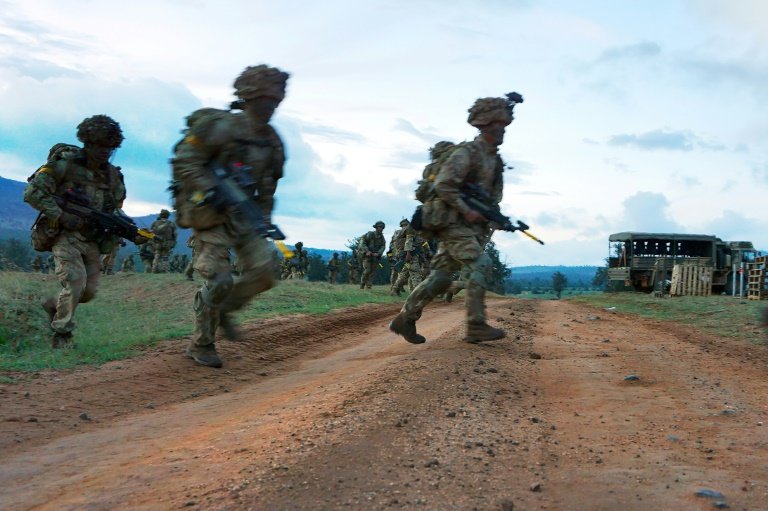 The soldier who confessed to the 2012 crime was a member of the British Army Training Kenya, similar to the soldiers pictured during training in March 2018 / © AFP/File

The British High Commission in Nairobi on Sunday said it was "fully cooperating" with a police investigation into the 2012 murder of a Kenyan woman last seen with a British soldier.

The woman, 21-year-old Agnes Wanjiru, was found dead in central Kenya nine years ago. She had reportedly been at a hotel in the central Kenyan town of Nanyuki with soldiers from a nearby British army base.

The Sunday Times reported that a British soldier confessed on the evening to killing Wanjiru, and showed comrades where he dumped the young mother's body in a septic tank behind the hotel.

The crime was reported but dismissed by military officials, said soldiers quoted by the newspaper, who claimed the accused's identity was an open secret but he was never questioned and eventually returned home.

UK High Commissioner to Kenya Jane Marriott expressed "outrage and concern" over Wanjiru's death and promised high-level support to a Kenyan investigation into her murder.

"I can assure Kenyans that the UK is fully cooperating with the investigation and will help in any way we can," Marriott said in a statement Sunday.

"Senior military visitors from the UK come to Kenya regularly -- including in the coming weeks -- and will be discussing Ms Wanjiru's murder and UK support to the Kenyan investigation."

The UK Ministry of Defence said it was working with the military and Kenyan police to ensure their investigation "is not impeded".

"The Defence Secretary is impatient with the pace of this and has directed full cooperation," a ministry spokesperson said late Sunday on Twitter.

Marriott said initial inquiries were made in 2012 by a special UK investigative branch and details about British personnel were submitted to Kenyan authorities when requested.

After an inquest in 2019, Kenyan authorities began looking into the murder again.

The British Army Training Unit Kenya (BATUK) said the jurisdiction to investigate rested with the Kenyan police and they supported their efforts.

Since Kenya gained independence in 1963, the British army has maintained a permanent garrison on the outskirts of Nanyuki.

Thousands of British infantrymen have passed through BATUK for exercises in harsh and difficult terrain, and the base has bolstered Nanyuki's economy for decades.

But the question of who has jurisdiction over British law-breakers has been contested in the past between Britain and Kenya, and other incidents have caused tension over their long presence in Nanyuki.

In March, a fire broke out at a BATUK training area and spread uncontrollably, burning for days and consuming around 12,000 acres (4,800 hectares).

In 2002, Britain's defence ministry paid millions in compensation to 233 people who said they had been injured by unexploded British ordnance in the area.