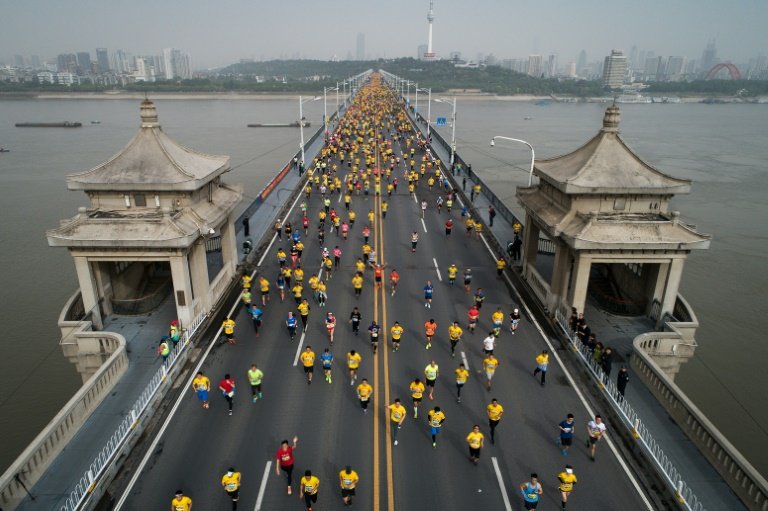 Wuhan marathon runners cross the Yangtze River bridge in 2018. This year's event was postponed at short notice because of Covid fears / © AFP

The Wuhan Marathon, which had been due to take place Sunday, has been postponed at short notice as worries increase over a coronavirus resurgence in China ahead of the 2022 Beijing Winter Olympics.

China reported 26 new domestic Covid-19 cases on Sunday, in an outbreak that has become the latest test of the country's zero-tolerance approach with just over 100 days until the start of the Games.

Authorities have been racing to contain virus infections via mass testing of residents and targeted lockdowns.

But with the rise in cases, organisers of the Wuhan Marathon said in a statement released late last week that they would postpone Sunday's event in the central Chinese city "to prevent the risk of epidemic spread".

The marathon was expected to have 26,000 participants taking part in races including full and half marathons in the city where coronavirus was first identified towards the end of 2019.

Next weekend's 40th edition of the Beijing marathon could also be delayed, local media outlet Beijing Daily reported Sunday. Organisers did not immediately respond when contacted by AFP.

As China wrestles with its latest coronavirus spike, authorities on Sunday announced the suspension of cross-provincial tour groups in five areas where cases have been detected, including Beijing.

Some cities, including Gansu's provincial capital of Lanzhou, and parts of Inner Mongolia have also suspended bus and taxi services, authorities said.

The recent spate of domestic infections involve a strain of the Delta variant from abroad, with most cases so far related to 13 tour groups or self-driving tours, said Wu Liangyou, another health official.

He cautioned that numbers will rise as virus testing continues.

The postponement and suspensions come as Beijing will on Wednesday mark 100 days before the Winter Olympics, which are set to open February 4.

Organisers admitted earlier this month that they "face great pressure" because of Covid-19.

The Games could be the most restricted mass sporting event since the pandemic began, with no international spectators allowed and a vaccine mandate for anyone entering a strictly enforced "bubble".

Athletes must be vaccinated or face 21-day quarantine upon entry to China.

Ahead of the Winter Olympics, Beijing has started to offer residents booster jabs for the coronavirus.

Officials added on Sunday that while booster shots are being given to key groups including high-risk personnel, further research is needed regarding a wider rollout.

"Having to continuously strengthen immunisation and continuously carry out booster shots is not our ultimate choice," said Wang Huaqing of the Chinese Center for Disease Control and Prevention.