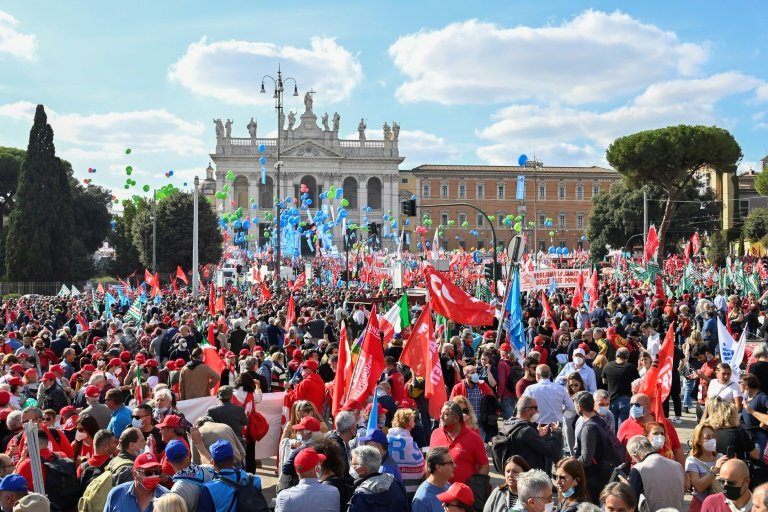 Tens of thousands of Italians called for a ban on the extreme right as they rallied in Rome Saturday after protests over a tough coronavirus pass regime last weekend degenerated into riots blamed on neofascists.

FN leaders were among those arrested after the Rome headquarters of the CGIL trade union -- Italy's oldest -- was stormed on October 9 during clashes outside parliament and in the historic centre.

"This is not just a retort to fascist 'squadrismo'," CGIL secretary general Maurizio Landini said, using a word used to refer to the fascist militias that began operating after World War I.

"This piazza also represents all those in Italy who want to change the country, who want to close the door on political violence," he told the gathered crowds.

Last weekend's riots followed a peaceful protest against the extension to all workplaces of Italy's "Green Pass", which shows proof of vaccination, a negative Covid-19 test or recent recovery from the virus.

The violence has focused attention on the country's fascist legacy.

Saturday's demonstration was attended by some 200,000 people, said organisers, with 800 coaches and 10 trains laid on to bring people to the capital for the event.

It coincided with the 78th anniversary of the Nazi raid on the Jewish Ghetto in Rome.

Over 1,000 Jews, including 200 children, were rounded up at dawn on October 16, 1943, and deported to the Auschwitz concentration camp.

"Neofascist groups have to be shut down, right now. But that has to be just the start: we need an antifascist education in schools," university student Margherita Sardi told AFP.

The centre-left Democratic Party, which has lead the calls to for FN to be banned, said its petition calling on parliament to do so had gathered 100,000 signatures.