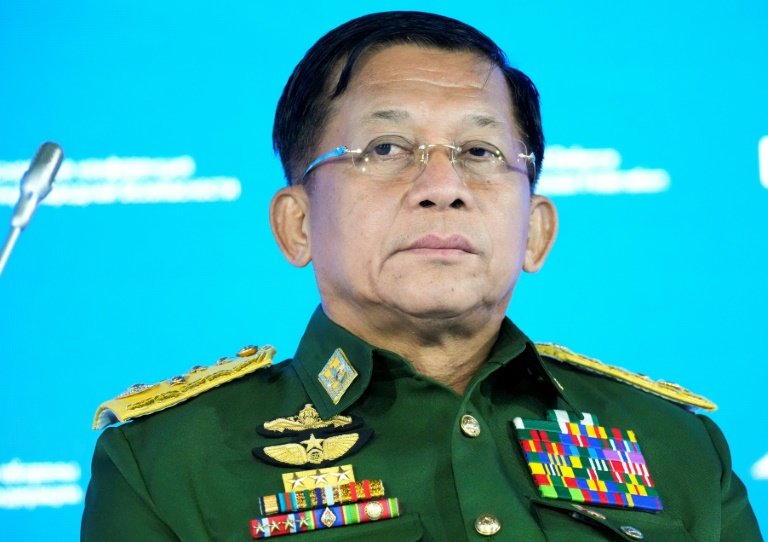 Myanmar's junta chief will be excluded from an upcoming ASEAN summit, the group said Saturday, a rare rebuke as concerns rise over the military government's commitment to defusing a bloody crisis.

Foreign ministers from the Association of Southeast Asian Nations agreed at an emergency meeting late Friday that a "non-political representative" for Myanmar would be invited to the October 26-28 summit, current ASEAN chair Brunei said in a statement.

The Myanmar junta slammed the decision on Saturday evening, accusing ASEAN of breaching its policy of non-interference in the domestic affairs of member states.

"Myanmar is extremely disappointed and strongly objected (to) the outcomes of the emergency foreign ministers meeting, as the discussions and decision on Myanmar's representation issue was done without consensus and was against the objectives of ASEAN," the Myanmar Foreign Ministry said in a statement.

He seized on talks between the US Secretary of State Anthony Blinken and ASEAN special envoy, Brunei's Second Foreign Minister Erywan Yusof, ahead of the meeting and also singled out EU pressure.

The bloc, widely criticised as a toothless organisation, took a strong stand after the junta rebuffed requests that a special envoy meet with "all stakeholders" in Myanmar -- a phrase seen to include ousted civilian leader Aung San Suu Kyi.

The statement noted "insufficient progress" in the implementation of a five-point plan agreed by ASEAN leaders in April to end turmoil following a coup in February.

It also said that the situation in Myanmar "was having an impact on regional security as well as the unity, credibility and centrality of ASEAN".

Richard Horsey, Myanmar adviser to Crisis Group, predicted the "non-political" representative would be someone below the level of minister or deputy minister.

Singapore's foreign ministry described the move as a "difficult but necessary decision to uphold ASEAN's credibility".

And independent Myanmar analyst David Mathieson said that "in ASEAN terms this is a real slap in the face".

Myanmar, mostly ruled by the military since a 1962 coup, has been a thorn in ASEAN's side since it joined in 1997.

Elections in 2015 overwhelmingly won by Suu Kyi's National League for Democracy (NLD) party ushered in the start of civilian rule -- but this was cut short by the coup.

ASEAN has been under international pressure to address unrest that erupted after the putsch, including massive protests; renewed clashes between the military and ethnic rebel armies in border regions; and an economy spiralling into freefall.

The bloc has expressed disappointment at a lack of cooperation from the junta, which continues to crack down brutally on dissent. Almost 1,200 civilians have been killed, according to a local monitoring group.

Part of the consensus was to allow a long-delayed visit by a special envoy, Brunei Second Foreign Minister Yusof.

ASEAN has insisted that he meets with all parties concerned, but the junta rejected any proposed meetings with people on trial, among them Suu Kyi, who is facing various charges.

A senior US administration official, commenting on media reports about the exclusion before the official statement was released, said "it seems perfectly appropriate and, in fact, completely justified... for ASEAN to downgrade Burma's participation", using Myanmar's former name.

Member nations had already voiced their disappointment at the path the junta has chosen.

"If there is no real progress then Malaysia's stance will remain: that we will not want the general to be attending the summit. No compromise on that," Malaysian Foreign Minister Saifuddin Abdullah said Friday ahead of the meeting.

Indonesian Foreign Minister Retno Marsudi said in a tweet after the meeting that her country had proposed that Myanmar "should not be represented at the political level" at the summit until it restores "its democracy through an inclusive process".

Aung Myo Min, the human rights minister of a shadow government of ousted Myanmar lawmakers called the NUG, praised the exclusion as "a very strong action" and voiced hope ASEAN would recognise the NUG as Myanmar's legitimate government.

Political activist Minn Khant Kyaw Linn, 23, who organised a protest in Mandalay where the ASEAN flag was burnt in June, said it was time for the bloc to allow NUG representatives to its meetings.

The junta -- officially known as the State Administration Council -- has promised to hold elections and lift a state of emergency by August 2023.