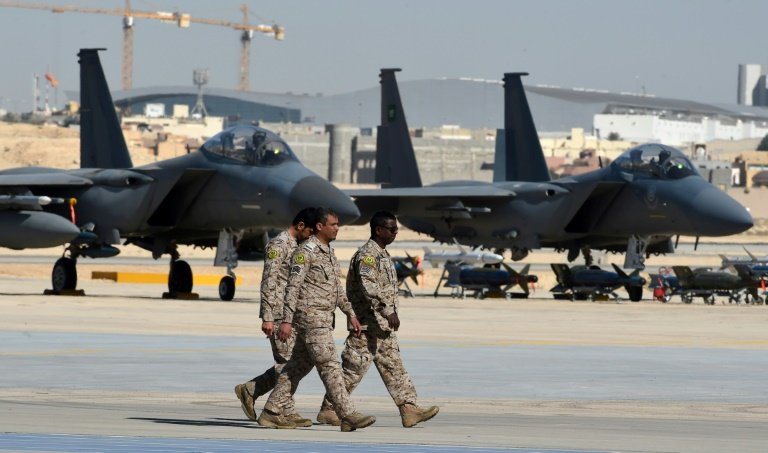 Saudi army officers walk past F-15 fighter jets, GBU bombs and missiles displayed during a ceremony marking the 50th anniversary of the creation of the King Faisal Air Academy at King Salman airbase in Riyadh on January 25, 2017 / © AFP/File

More than 100 Yemeni rebels have been killed south of Marib, the Saudi-led coalition said on Wednesday, reporting a heavy toll for the third straight day in fighting for the strategic city.

The Iran-backed Huthis' latest casualties in the Abdiya district "exceeded 108", the coalition said, after announcing more than 156 dead on Monday and over 134 on Tuesday.

That brought the unconfirmed toll to about 400 in the area this week as an analyst said the rebels have made significant advances.

The coalition, which relies heavily on air strikes to combat the Shiite Huthis, did not reveal how it arrived at those figures. They could not be independently verified by AFP.

"We have conducted 19 operations targeting (Huthi) militia members in the past 24 hours in Abdiya, destroying 12 of their military vehicles and their losses exceeded 108 members," the coalition said in a statement carried by state-run Al-Ekhbariya television.

The Huthis said they were "on the edges of the city" in a video statement on Tuesday.

Adam Baron, a political analyst focused on Yemen and the wider region, said the rebels had made "significant" territorial gains.

"The advances are quite significant on both a strategic and psychological level -- these are areas that were seen as quite secure just a year or two ago," he told AFP.

Yemen has been devastated by a seven-year war pitting the rebels against the government supported by a Saudi-led military coalition.

The rebels overran the capital Sanaa, just 120 kilometres (75 miles) to the west of Marib, in 2014, prompting the Saudi-led intervention to prop up the government the following year.

Tens of thousands of people have been killed and millions have been displaced since then. Many fled to Marib, whose population has ballooned since the war began.

As well as the deaths in Abdiya, six people were killed in a car-bombing on Sunday that targeted the governor of Aden, the government's provisional seat of power. He survived the attack.

Saudi Arabia accuses Iran of supporting the Huthis with weapons and drones, but Tehran says it only provides political support to the rebels.