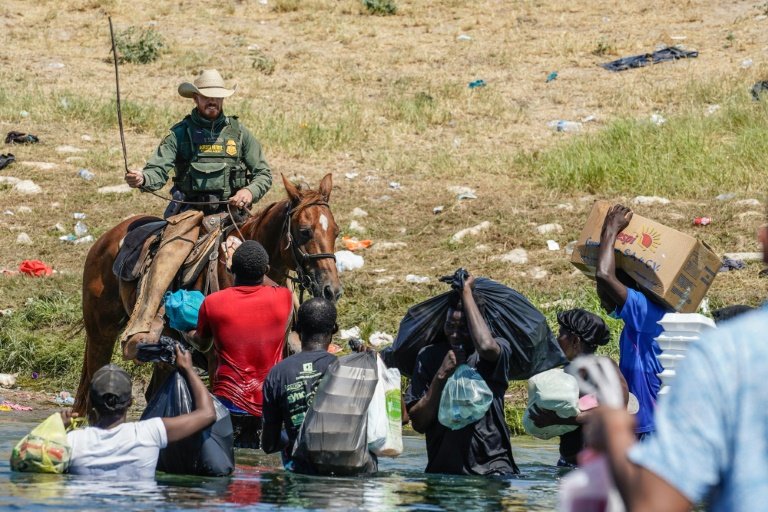 A United States Border Patrol agent on horseback uses his reins as he tries to stop Haitian migrants from entering an encampment on the banks of the Rio Grande near the Acuna Del Rio International Bridge in Del Rio, Texas / © AFP

US Homeland Security Secretary Alejandro Mayorkas said Monday that the authorities would investigate reports that Haitian migrants in Texas may have been abused by border patrol officers on horseback.

Mayorkas said the mounted officers were trying to manage the flow of hundreds of migrants crossing the Rio Grande river from Mexico near Del Rio, Texas.

Pictures by AFP photographer Paul Ratje and video footage which spread quickly over social media appeared to show riders swinging their long reins to threaten migrants and push them back toward the river.

Ratje said many of the Haitians were crossing the river back and forth to get food for their families and were blocked by the horses.

"Some of the migrants started running to try to get around the horsemen, and one of the agents grabbed the Haitian in the picture by the shirt and he ended up swinging him around while the horse trotted in a circle," Ratje said of one particular photograph.

Ratje said he did not think the man had been hurt.

Shortly after that, he said, "They kind of calmed down, and they started letting people in." 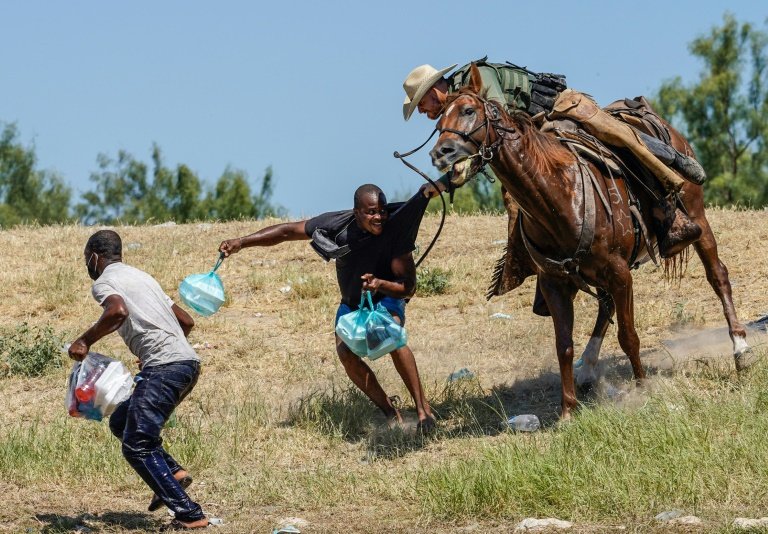 A United States Border Patrol agent on horseback tries to stop a Haitian migrant from entering an encampment on the banks of the Rio Grande near Del Rio, Texas / © AFP

Some commentators online said the images evoked times in history when horse-mounted police or prison guards routinely used whips against Black Americans, and even recalled 19th-century scenes of the violence of slavery in the United States.

"We are going to investigate the facts to ensure that the situation is as we understand it to be," Mayorkas told reporters.

"If it's anything different, we will respond accordingly."

At the White House, Press Secretary Jen Psaki said she had seen the footage.

"I don't have the full context," she said, adding: "I can't imagine what context would make that appropriate.

"It's horrible to watch," she said.

The controversy came as US border patrol agents continued to struggle to stem a massive influx of undocumented migrants, thousands of them from Haiti.

US Border Patrol chief Raul Ortiz defended the mounted patrol units but said the agency "will certainly look into the matter to make sure that we do not have any activity that could be construed as a response... that is unacceptable." 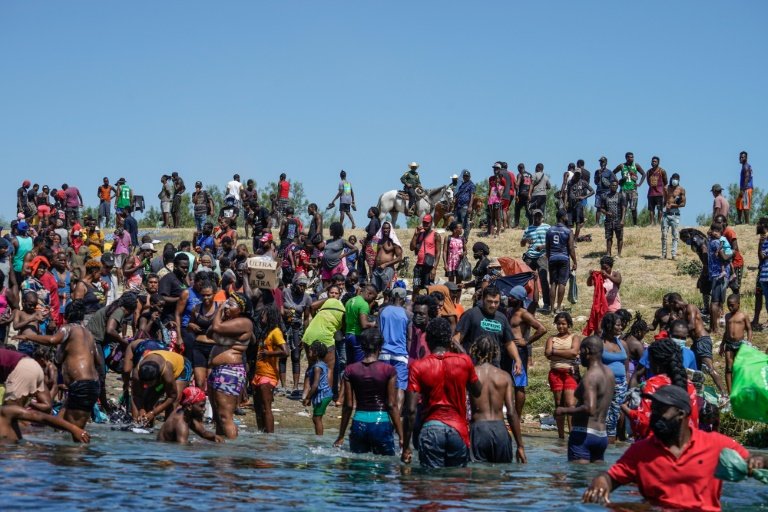 Haitian migrants, part of a group of over 10,000 people staying in an encampment on the US side of the border at Del Rio, Texas, cross the Rio Grande river to get food and water in Mexico / © AFP

The migrant surge has become a crisis for President Joe Biden's administration.

Speaking in Del Rio, Mayorkas said Haitian migrants were receiving fake information about being able to stay in the United States.

He said the government would step up repatriation flights for the Haitians, and that US authorities considered it safe to send them back.

The Haitians, Mayorkas said, have been mistakenly told that they will be able to stay in the United States as refugees under "temporary protected status" (TPS) due to the recent political turmoil and a strong earthquake in Haiti.

"We are very concerned that Haitians who are taking this irregular migration path are receiving false information that the border is open, or that temporary protected status is available," Mayorkas said.

"We have reiterated that our borders are not open, and people should not make the dangerous journey," he said.

"If you come to the United States illegally, you will be returned."

TPS has been in place for years for Haitians who were stuck in the United States after the massive earthquake of 2010.

After political turmoil sparked by the July 7 assassination of President Jovenel Moise, Biden's administration extended TPS for Haitians who were in the country on or before July 29.

"No one who arrived this past week will be eligible to get TPS," Mayorkas emphasized. 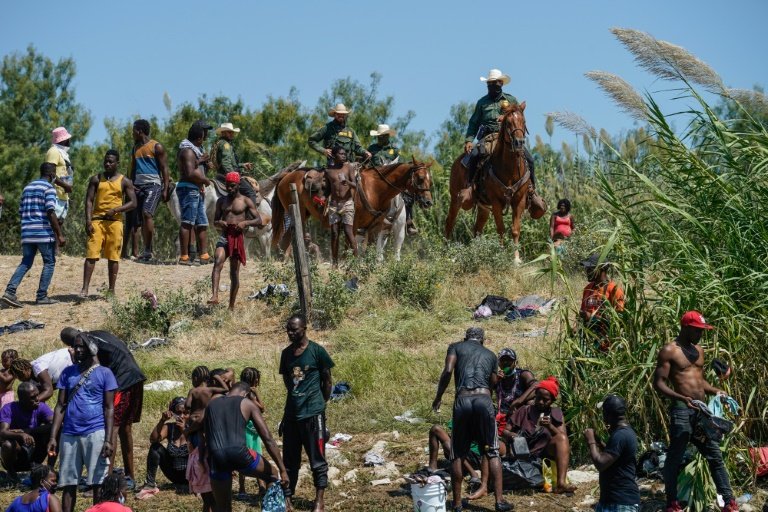 United States Border Patrol agents on horseback look on as Haitian migrants sit on the banks of the Rio Grande near Del Rio, Texas / © AFP

He insisted that it was reasonable to return the migrants to Haiti, despite the ongoing political instability and the earthquake that struck the southwest of the country on August 14.

"We made an assessment based on the country conditions, as we are required to do, that... Haiti could in fact receive individuals safely," Mayorkas said.

"This mistreatment runs counter to our American values and cannot be tolerated," Thompson said.