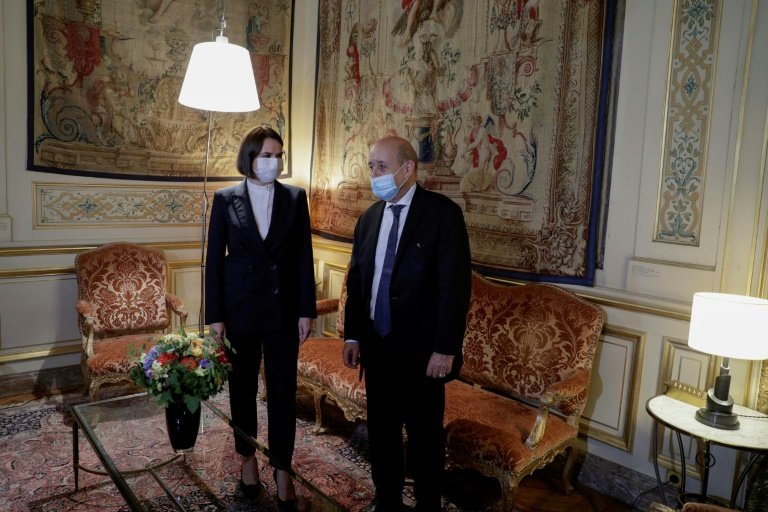 Over a year after a disputed vote that sparked unprecedented protests and was derided by the West as rigged, Tikhanovskaya said sanctions and an international push for new elections were needed.

"Belarusians need new energy and fuel to go forward," she told reporters in Paris during a four-day visit to drum up support.

She called on French President Emmanuel Macron to take "decisive action in solving the Belarusian crisis".

"We do not have the right to lose momentum... democratic countries have to be firm and principled and have a policy of non-recognition of Lukashenko," added Tikhanovskaya, who now lives in Lithuania.

But she made clear that the "only solution" to the crisis in Belarus was new elections, saying that France could be part of a "mediation platform" with the regime to set up new polls.

Tikhanovskaya was not scheduled to meet Macron on the trip, but made clear she would "with pleasure meet him any day, any moment."

She did however later Wednesday meet French Foreign Minister Jean-Yves Le Drian, who said he wanted to send a "strong political message of solidarity" with the talks.

Le Drian said the crackdown in Belarus "had only radicalised" over the last year and vowed France "would continue efforts" for a political solution.

The Belarusian authorities would only win political legitimacy through "political dialogue and free and fair elections, under international observation", he added.

Tikhanovskaya said there could be no let-up of support as activists and journalists continue to be arrested and tried in Belarus, and thanked leaders like Macron who condemned last year's polls.

"This support of world leaders helped the people in Belarus to believe that they are not alone in their fight for freedom and democracy," she said.

"However, the repressions have not stopped for a day in Belarus since last year."

Tikhanovskaya ran against Lukashenko, who has been in power since 1994 and been described as Europe's last dictator, after the candidacy of her blogger husband was blocked and he was arrested.

She claimed victory in the election but fled to Lithuania after a violent crackdown by the authorities.

She has rallied Western support and met world leaders, including US President Joe Biden, but now faces a challenge to keep up pressure as a defiant Lukashenko remains in power.

According to a count kept by the Paris-based International Federation for Human Rights (FIDH), there are over 660 political prisoners behind bars in Belarus.

One of the best-known activists is opposition blogger Roman Protasevich who was dramatically arrested in May after Belarus scrambled a fighter jet to intercept the Ryanair flight in which he was flying over the country.

He is currently under house arrest.