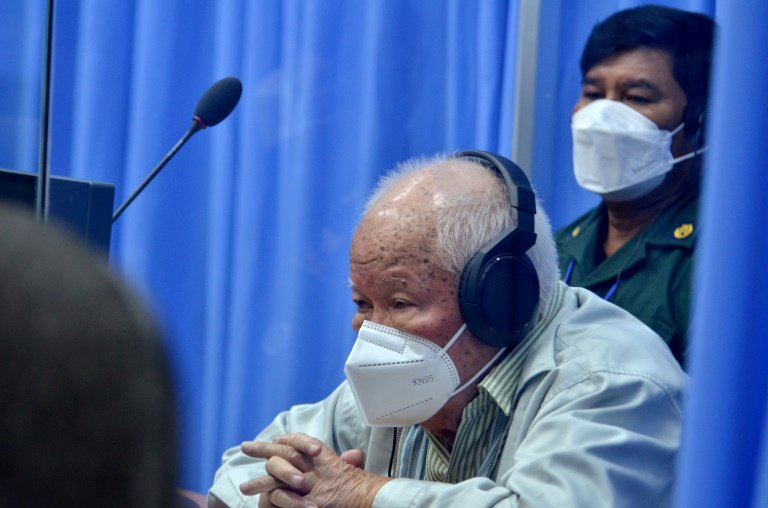 The last surviving senior Khmer Rouge leader on Monday began an appeal against his life imprisonment for his role in the genocide committed by the regime in Cambodia more than four decades ago.

His lawyers on Monday argued the UN-backed court had taken a "selective approach" to witness testimony and not given proper weight to evidence in his favour.

They also said the tribunal had convicted him using legal criteria that he could not have known when the alleged crimes took place more than 40 years ago.

The conviction should be "null and void", said defence lawyer Kong Sam Onn.

Khieu Samphan was jailed alongside "Brother Number 2" Nuon Chea for life for genocide and a litany of other crimes, including forced marriages and rapes.

The pair were previously handed life sentences by the court in 2014 for crimes against humanity over the violent forced evacuation of Phnom Penh in April 1975, when Khmer Rouge troops drove the population of the capital into rural labour camps.

The hearing at a special courtroom in Phnom Penh is due to last until Thursday and Khieu Samphan is expected to testify at the close of the appeal proceedings, according to a court official.

At the close of his genocide trial in 2017, he spoke angrily to the court, denying the charges against him and rejecting the label of "murderer" in forceful closing remarks.

Khieu Samphan, who was one of the Khmer Rouge's few public faces as its head of state, claimed he was not part of the killing machine that exterminated nearly a quarter of Cambodia's population.

He denied responsibility for the mass murders and other abuses against Cham Muslims and ethnic Vietnamese, which were described in chilling detail by more than 100 witnesses throughout the three-year trial.

The elderly ex-head of state -- who looked in good health -- sat behind his lawyers during Monday's hearing and appeared to be closely following the proceedings.

In a separate room seated several feet apart due to Covid restrictions were civil parties, survivors under Pol Pot's ultra-Maoist reign, listening as Khieu Samphan's lawyers made their case.

"I lost my husband and parents and other relatives under the regime," said Suos Phon, 73.

"His (Khieu Samphan's) denial of the crimes causes me so much pain," she told AFP, after the end of the first court day.

Pol Pot, who wanted to transform Buddhist-majority Cambodia into an agrarian utopia, died in 1998 without facing trial.

Former Khmer Rouge foreign minister Ieng Sary and his wife also died before they could be tried.

The hybrid court, which uses a mix of Cambodian and international law, was created with UN backing in 2006 to try senior Khmer Rouge leaders.

It has convicted only three people so far and cost more than $300 million.

Strongman Prime Minister Hun Sen -- himself a former Khmer Rouge cadre -- has spoken against any further cases, claiming it would plunge the country into instability.