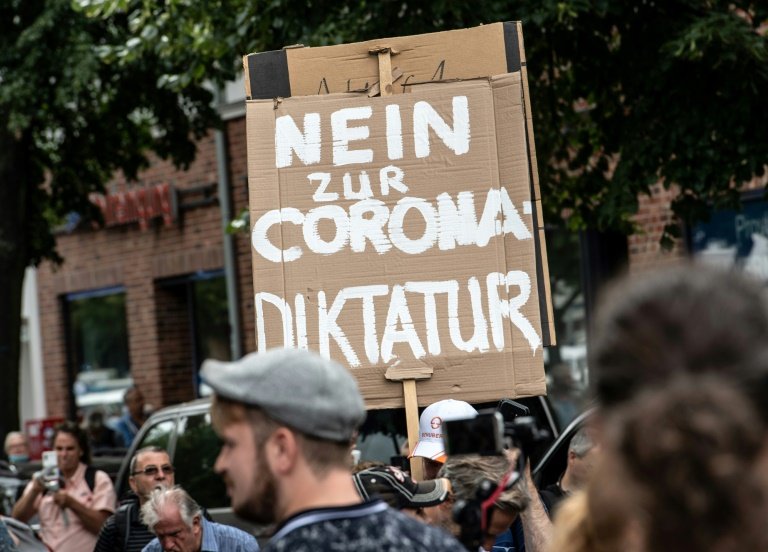 'No to the corona dictatorship': Thousands stage anti-lockdown protest in Berlin / © AFP

Thousands of anti-lockdown demonstrators defied a court-ordered protest ban on Sunday and gathered in the streets of Berlin, resulting in scuffles with police.

Police said some protesters had "harassed and attacked" officers and ignored roadblocks, disrupting traffic in parts of the German capital.

"They tried to break through the police chain and pull out our colleagues. This led to the use of irritants, batons and physical violence," Berlin police tweeted.

Several people were arrested, they added.

The protest was called by the "Querdenker" (Lateral Thinkers) movement, which has emerged as the loudest voice against Germany's coronavirus restrictions.

Judges had banned several of its planned demos this weekend, including one for Sunday that was expected to draw some 22,500 people.

The court said it could not allow the rallies to go ahead over fears that participants would flout rules on mask wearing and social distancing, at a time when Germany's infection numbers are on the rise again.

Berlin police deployed more than 2,000 officers in riot gear across the city, in anticipation of protesters ignoring the ban.

According to police, several thousand people turned out on Sunday, mainly in the city's western Charlottenburg district and the centre.

Officers threatened to use water cannon to disperse crowds heading towards the Brandenburg Gate in the afternoon, after which people began to leave, police said.

Some of the demonstrators held up signs saying "Freedom" and "No to the corona dictatorship", with few masks seen among them.

Protests by Germany's Querdenker movement have attracted thousands, at times tens of thousands, but are often broken up early for violating virus rules. Several of the demos have descended into violence.

Germany's domestic intelligence service announced in April that it was placing some Querdenker members under observation over concerns they have ties to right-wing extremism.