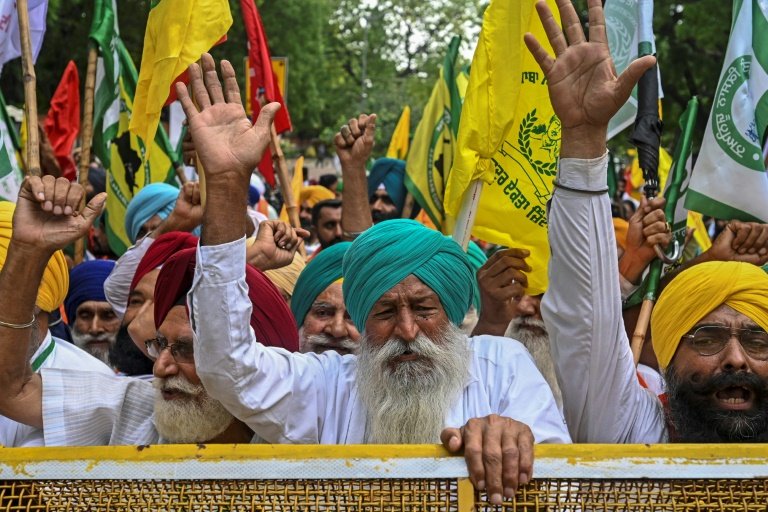 Thousands of security forces deployed across New Delhi on Thursday for protests by farmers who are renewing a campaign against government agriculture reforms.

After an earlier rally turned into a riot, authorities allowed only 200 farmers to enter the centre of the capital.

Police manned barricades and roadblocks around Delhi as the farmers were ferried to the protest site in buses.

The farmers have vowed to stage a demonstration every day during a parliament session that ends on August 13.

"As long as parliament is on, we will protest here. Wherever we are stopped and there are barricades, we will sit there and have our own 'farmer's parliament'," said Devinder Singh, one of the farmers.

Sonia Mann, a Punjabi actor and activist, was also among the 200. She shouted a message to Prime Minister Narendra Modi: "You must think about the plight of the farmers and you must repeal the three farm laws."

In parliament, opposition MPs staged their own protest calling for the repeal of the laws which have divided the country of 1.3 billion people.

The farmers and opposition parties say the changes will give control of the agriculture industry, which dominates the Indian economy, to private conglomerates and put many small farms out of business.

The government, which has suspended implementation of the laws since the protests started in November, says the measures will boost farmers' revenues by allowing them to sell produce on open markets.

The farmers have been camping on the outskirts of Delhi since November in what has become the biggest challenge to Modi since he came to power in 2014.

In January, thousands of farmers clashed with police and drove tractors into security barriers in a citywide rampage that left one farmer dead and nearly 400 police injured.