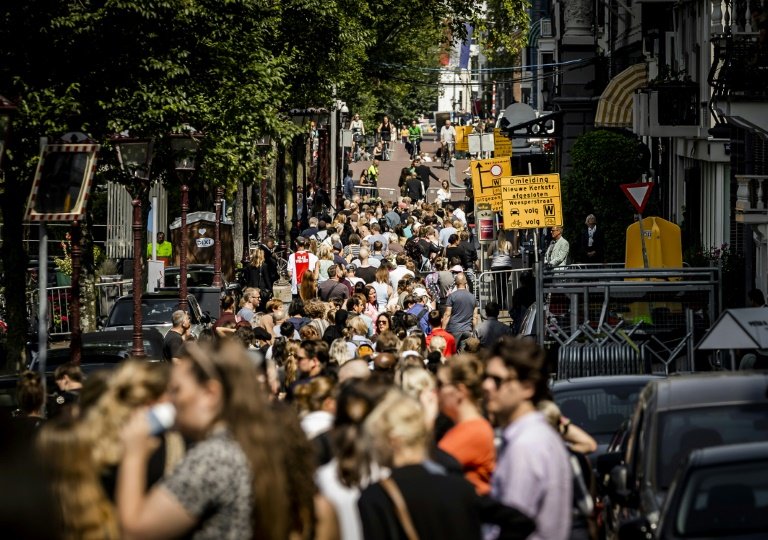 Thousands of mourners on Wednesday filed past the coffin of slain Dutch crime reporter Peter R. de Vries, paying final respects to the national "hero" who was gunned down in broad daylight in an Amsterdam street two weeks ago.

A long queue began forming at 7:00 am outside the Dutch capital's landmark Carre Theatre, with many in tears as they said goodbye to a man whose staunch advocacy on behalf of families of crime victims earned him widespread respect and admiration.

A prominent reporter who had been involved in a court case against one of the country's most wanted drug barons, De Vries, 64, was shot at least five times as he left a television studio on July 6.

"He meant a lot to the Netherlands. He's done so many good things," added Ruth van Rosmalin.

"He was our hero. He stood up for people who couldn't do it themselves," she said.

By noon, the queue stretched for more than half-a-kilometre as more mourners arrived, some carrying flowers and others wearing T-shirts with the slain reporter's photograph printed on it.

Thousands more were expected throughout the day in an "unprecedented" outpouring of grief, an official of the RTL private broadcaster said.

Inside the theatre a white coffin lay draped with dozens of red roses and a large photograph of De Vries at the top.

An Ajax football jersey -- the late journalist was a massive fan -- stood in a frame next to the coffin.

Mourners were asked not to take too long in paying respects to give all a chance until this evening to do a walk-past.

Many of those leaving the theatre were in tears, an AFP correspondent said.

"Peter R. de Vries did not deserve this. He was far too young and that makes me extremely sad," said Ton Trompert, 61, before breaking down.

Family and friends of De Vries are to say their farewells on Thursday during a closed ceremony, while radio stations are to play De Vries' favourite song throughout the day, Dutch national newscaster NOS said.

Two men were arrested shortly after the shooting.

The two men, identified by Dutch media as Polish national Kamil E. aged 35 and Delano G, 21, will remain in custody while the police investigation continued.

The attack on De Vries, who first won fame for his inside reporting on the 1983 kidnapping of Heineken millionaire Freddy Heineken, sparked widespread condemnation and concern for the safety of journalists in Europe.

De Vries often appeared as a commentator or spokesman for families of crime victims, particularly in so-called "cold cases".

Most recently he acted as advisor and confidant of Nabil B., the state's key witness in the case against Ridouan Taghi, described as the country's most wanted criminal.

Taghi's organised crime group has been painted as a "well-oiled killing machine" by prosecutors, and De Vries said in a tweet in 2019 that according to police information he was on Taghi's hit list.