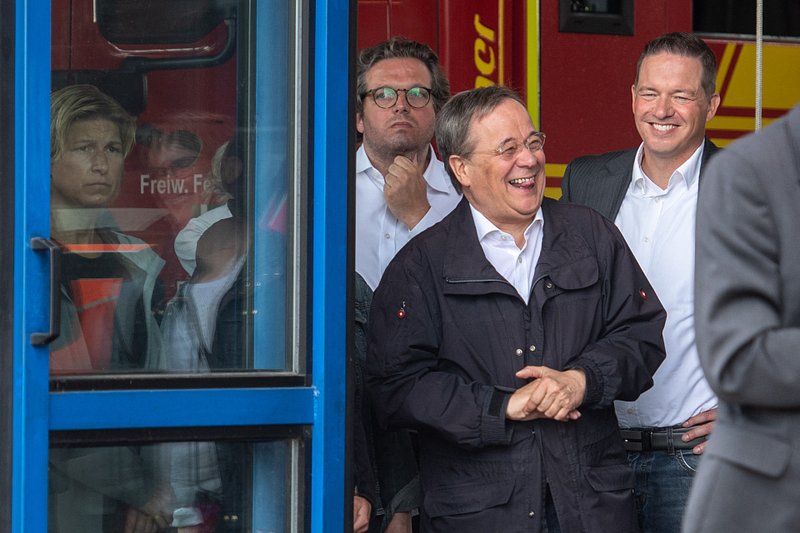 German chancellor candidate Armin Laschet, the frontrunner in the race to succeed Angela Merkel, was forced to apologise Saturday after he was caught on camera laughing during a visit to a flood-ravaged town.

Laschet was seen chatting and joking in the background with several people while President Frank-Walter Steinmeier gave a statement expressing sympathy for victims in the hard-hit town of Erftstadt.

At one point in the widely shared clip, Laschet bursts out laughing for several seconds.

"Laschet laughs while the country cries," the best-selling Bild daily said on its website.

Laschet later apologised on Twitter, saying he was deeply moved by the suffering of the flood victims and regretted "the impression that was given by a conversation situation".

"This was inappropriate and I'm sorry."

Commentators and politicians were quick to condemn Laschet on social media.

"This is all apparently a big joke to (Laschet)," wrote Maximilian Reimers from the far-left Die Linke opposition party. "How could he be a chancellor?"

The controversy comes just days after Laschet was widely panned for admonishing a female reporter and calling her "young lady" during a tense back and forth about the link between the deadly floods and climate change.

"Excuse me, young lady, you don't change policies just because of one day like this," said Laschet, who is the premier of North-Rhine Westphalia state (NRW), one of the two German regions worst affected.

Germany has counted more than 140 lives lost since Wednesday, while neighbouring Luxembourg, Belgium and the Netherlands have also been affected by the heavy storms.

Erftstadt in NRW has seen major devastation after the extreme rainfall triggered a landslide in the town.

"I grew up in Erftstadt," tweeted Olav Waschkies. "The behaviour of our state premier is unacceptable and unforgivable."

Laschet's conservatives are leading in opinion polls with 30 percent support ahead of a September 26 general election that will mark the end of Merkel's 16 years in power.

The opposition Greens are in second place at around 20 percent.