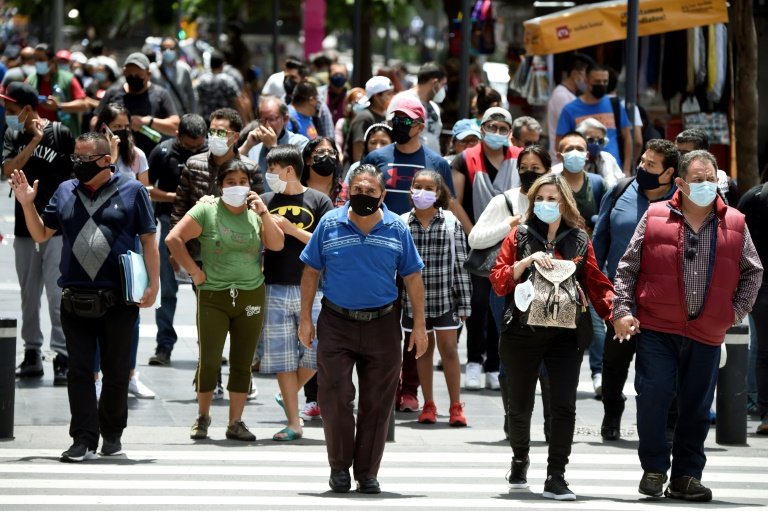 Around 21 million people have been fully vaccinated against the coronavirus in Mexico, a country of 126 million / © AFP/File

First there were fake vaccines. Now bogus coronavirus immunization certificates are being offered for sale in the Mexican capital, aimed at people traveling to countries that require proof of inoculation.

In an area of the historic district known for its printers and counterfeiters, a new service has appeared alongside documents purporting to be birth certificates, driver's licenses and passports.

Customers for the fake Covid-19 vaccination certificates are usually people who want to travel but have not been fully immunized, or who received vaccines not recognized in the country they plan to visit, a vendor said.

"If they were vaccinated with the Chinese shots, here we change it for Pfizer or Sputnik V," said the man, who gave his name as Cris.

Undeterred by the presence of police officers nearby, he told potential customers the price ranged from 1,100 to 2,000 Mexican pesos ($55-100), according to an AFP reporter.

"In two hours you'll have the document," he added, his face partly concealed by a face mask, as he worked in the Santo Domingo district.

Mexico's health ministry recently announced that people who have been vaccinated can download an immunization certificate for free through an official website to use when traveling or in other situations.

Around 21 million people have been fully vaccinated in Mexico, a country of 126 million, which has used Pfizer/BioNTech, AstraZeneca, Sinovac, Cansino, Sputnik V and Johnson & Johnson shots.

The official certificates have a QR code that redirects whoever scans it to a government page that confirms the holder is fully immunized.

The counterfeiters offer to tamper with that code, but whether it actually works is unclear.

To cheat the system would require a certain level of technological know-how so that the person checking the certificate is redirected to a fake government website, said cybersecurity specialist Carlos Ramirez.

In theory, he said, it would be possible to load each QR with the data requested by customers -- a challenging but not impossible task for cyber criminals.

The Mexican health ministry did not respond to a request for information about its digital security protocols and what measures it plans in response to the counterfeits.

It is not the first fraudulent activity linked to the pandemic in Mexico, where Pfizer said in April fake vaccines had been found for sale under its brand name.

In Santo Domingo, forged laboratory tests with a negative Covid-19 result are also on sale for about $30.

The falsification of official documents carries a prison sentence of four to eight years in Mexico, whose official coronavirus death toll of more than 235,000 is the world's fourth highest.