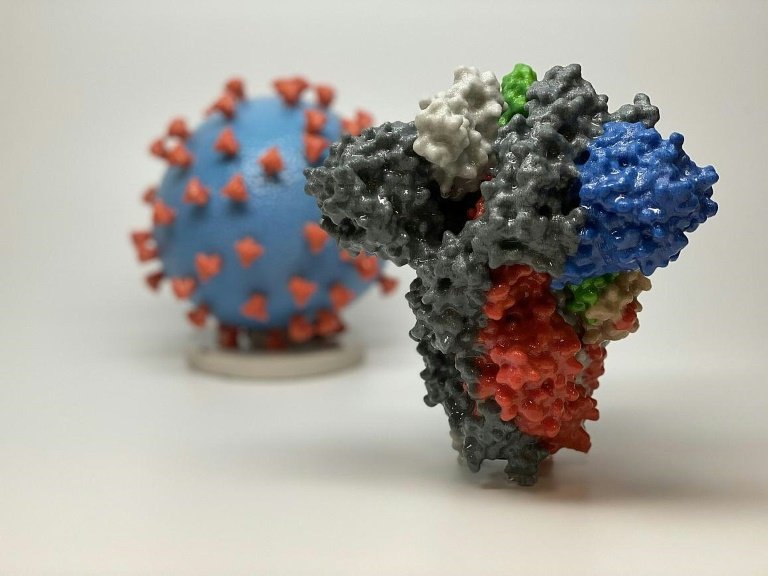 Tocilizumab and sarilumab, which are given by infusion or injection, are currently recommended for use along with corticosteroids in severe Covid patients by Britain / © National Institutes of Health/AFP/File

Arthritis drugs tocilizumab and sarilumab reduce the risk of death and the need for ventilators among hospitalized Covid-19 patients, according to an analysis of nearly 11,000 patients published Tuesday.

The study appeared in the Journal of the American Medical Association and prompted the World Health Organization (WHO) to recommend the use of the medicines, known as IL-6 inhibitors, in addition to corticosteroids among patients with severe or critical Covid.

Manu Shankar-Hari, a professor at King's College London and lead author of the paper, told AFP that the research represented a "definitive piece of evidence" in favor of the drugs after earlier studies produced mixed results.

Among hospitalized Covid patients, administering one of the drugs in addition to corticosteroids reduced the risk of death by 17 percent, compared to the use of corticosteroids alone.

In patients who were not on ventilators, the risk of progressing to mechanical ventilation or death was reduced by 21 percent, compared to the use of corticosteroids alone.

Severely ill Covid patients experience an immune system overreaction known as a "cytokine storm" that can cause severe organ damage and death.

Tocilizumab and sarilumab are used to treat rheumatoid arthritis, an autoimmune condition, by inhibiting the effects of interleukin (IL)-6, a type of protein called a cytokine that signals the body to mount an inflammatory response.

But previous research on whether IL-6 inhibitors can be useful against severe Covid have variously reported benefit, no effect and harm.

This prompted the WHO to coordinate the new study that combined data from 27 randomized trials conducted across 28 countries.

The analysis included information on 10,930 patients, of whom 6,449 were randomly assigned to receive interleukin-6 inhibitors and 4,481 to receive usual care or placebo.

Overall, the risk of death within 28 days was 22 percent compared with an assumed risk of 25 percent in those receiving only usual care.

Outcomes were better when patients also received corticosteroids, with the risk of dying 21 percent compared to 25 percent for those receiving usual care.

This means that for every 100 such patients, four more will survive.

The study also examined the impact of these drugs on whether patients progressed to ventilators or death.

Among patients also given corticosteroids, the risk was found to be 26 percent for those receiving IL-6 inhibitors compared with an assumed 33 percent in those receiving usual care.

In other words, for every 100 such patients, seven more will survive and avoid mechanical ventilation.

Shankar-Hari said he hoped global organizations such as the WHO could now lobby to improve access of the drugs for lower and middle income drugs where the current cost could be prohibitive for widespread use.