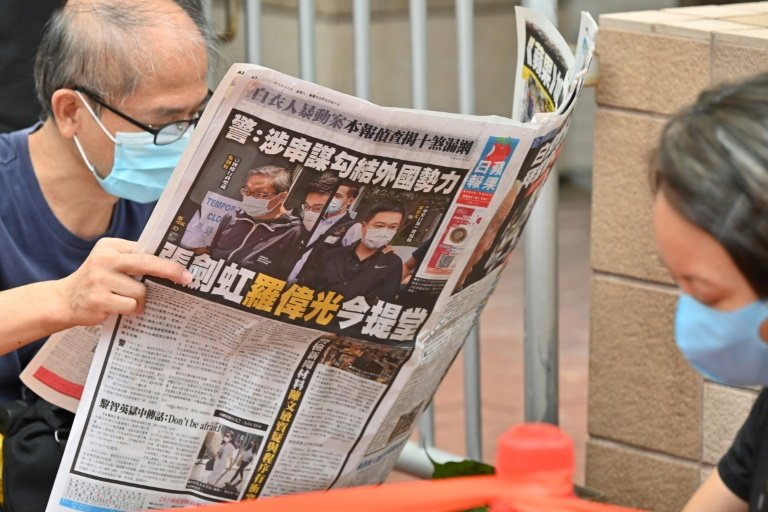 Hong Kong's Apple Daily newspaper has long been a thorn in Beijing's side, with unapologetic support for the city's democracy movement and caustic criticism of China's authoritarian leaders / © AFP/File

Hong Kong pro-democracy newspaper Apple Daily said Monday its board will decide whether to close the publication at their next meeting on Friday after an asset freeze by authorities using a new national security law left the outspoken media group unable to pay staff.

Apple Daily has long been a thorn in Beijing's side, with unapologetic support for the city's pro-democracy movement and caustic criticism of China's authoritarian leaders.

Its owner Jimmy Lai is in jail and was among the first to be charged under the security law after its imposition last year.

Its chief editor and CEO were detained last week and its finances frozen under the law, which Beijing has used to stamp out dissent in the international business hub.

Apple Daily's remaining board met on Monday to discuss the paper's future.

"The board... decided to meet again on Friday to decide whether to terminate Apple Daily," the paper said in a short push notification to readers.

Rival outlets Now TV and Oriental Daily both reported, citing sources, that Apple Daily's board has all but decided to close the paper, with the final publication date to be announced at the next meeting on Friday.

The paper's closure would shutter one of the few remaining local newspapers willing to be critical of China's authoritarian leaders.

It would also be a huge victory for authorities who have made no secret of their desire to see the outlet silenced.

In an interview with CNN, a senior aide to Lai said last week's freeze order by the city's security chief had crippled the newspaper's ability to do business.

"Our problem at Apple Daily is not that we don't have funds, we have $50 million in the bank," he said.

Lai, 73, is in prison for attending democracy protests in 2019. He faces a life sentence if convicted of national security crimes.

Last Thursday, more than 500 police officers raided the paper's newsroom and arrested five executives over a series of articles that police said called for international sanctions.

Two of those executives -- chief editor Ryan Law and CEO Cheung Kim-hung -- have been charged with "colluding" with foreign forces to undermine China's national security and were remanded into custody over the weekend.

The operation was the first time political views and opinions published by a Hong Kong media outlet have triggered the security law.

Written in Beijing and imposed on Hong Kong last June, the law allows authorities to freeze assets of any individual or company in the international business hub that is deemed to be a security threat. 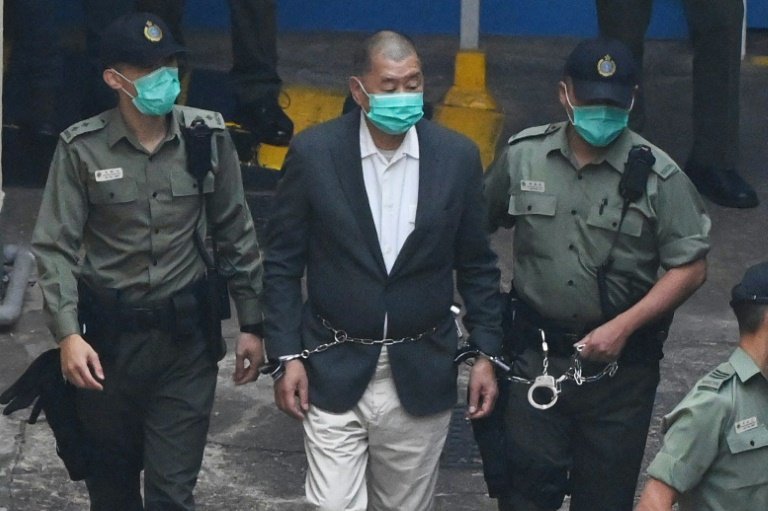 It does not require a court order.

Then on Thursday, Secretary for Security John Lee said a further HK$18 million (US$2.3 million) of Apple Daily's company assets had been blocked.

"These are all orders from basically the Secretary of Security, we are facing a security agency, we are not facing courts," Simon told CNN.

Simon is himself wanted by Hong Kong police on national security charges but left the city last year and has since relocated to the United States.

Apple Daily said it was planning to ask Lee to unfreeze some money so it can pay 700 employees. If the application is unsuccessful, the paper said it planned to go to court.

Hong Kong's Security Bureau declined to comment on whether it had been contacted by Apple Daily, citing ongoing legal proceedings.

"We handle such crimes according to the law, targeting at illegal acts, and invoke the power to freeze offence related properties based on need and the law."