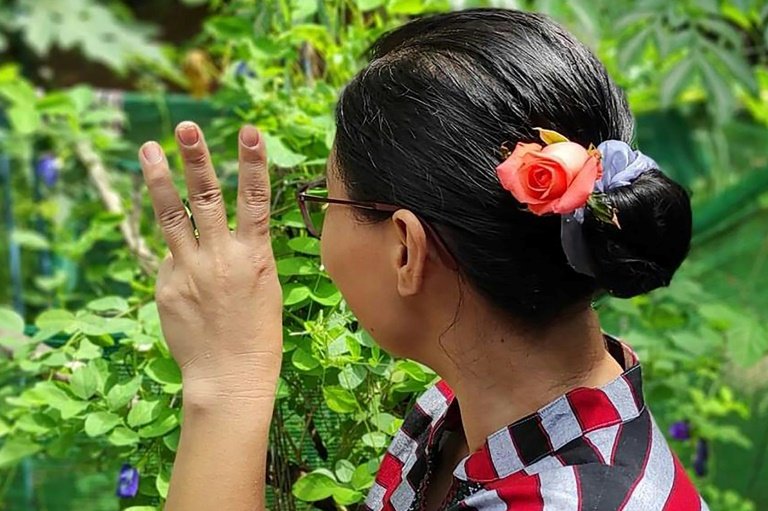 Anti-coup protesters in Myanmar donned flowers in their hair Saturday to mark the birthday of ousted civilian leader Aung San Suu Kyi, who remains under house arrest and is due to face court again next week.

Suu Kyi's elected government was overthrown in a February 1 coup that sparked mass protests and renewed clashes between the military and ethnic rebel armies in border regions.

Flowers tucked into a bun have long been a signature look of Suu Kyi, who turned 76 on Saturday.

Many replicated the floral hairstyle and uploaded pictures onto social media across Myanmar for the occasion.

Among them was Myanmar Miss Universe beauty queen Thuzar Wint Lwin, who wore red flowers in her hair and wrote: "May our leader be healthy."

"Happy Birthday Mother Suu. We are right behind you," the signs read.

Some marched with black umbrellas and banners that read "freedom from fear" alongside pictures of Suu Kyi.

In the border region of Karen state, some rebel soldiers were photographed holding their guns and yellow, white and purple posies, as well as single flowers tucked behind their ears.

Demonstrators in the southeastern city of Dawei made a giant pink birthday cake and took it to their street protest.

The Nobel Peace Prize winner's international reputation was damaged after she defended Myanmar's military over allegations of genocide against the ethnic-minority Rohingya population in troubled Rakhine state in 2017.

Not all those participating in flower protests were full of praise for Suu Kyi.

"I am involved in this campaign because now she is unfairly detained by the military and her civilian rights... and freedom is denied," Thet Swe Win, a 35-year-old activist, told AFP.

"After she is free from her detention, she will have to take full responsibility over her silence concerning the suffering of Rohingya and other ethnic groups."

"I wish you all the best for your health and strength... We stand with the people of Burma," he said, using a previous name for the country. 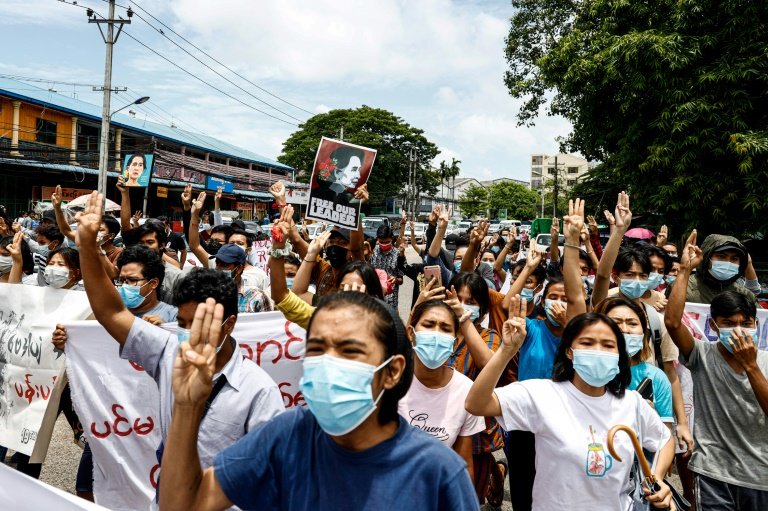 The civilian death toll since the coup is estimated to be at least 870 people, according to a local monitoring group, while close to 5,000 protesters are in detention after being arrested.

The UN General Assembly on Friday took the rare step of calling on member states to "prevent the flow of arms" into Myanmar, part of a non-binding resolution condemning the military coup.

The resolution -- which did not go so far as to call for a global arms embargo -- also demands that the military "immediately stop all violence against peaceful demonstrators".

It was approved by 119 countries, with 36 abstaining including China, Myanmar's main ally. Only one country, Belarus, voted against it.

The Myanmar junta issued a statement on Saturday night rejecting the resolution.

"The acts of interference in the internal affairs which infringe on the (state's) sovereignty shall not be accepted," the statement said.

"Myanmar rejects the said resolution as a whole," it said, adding that it was "based on one-sided sweeping allegations and false assumptions".

Suu Kyi is due back in court next week and has been hit with an eclectic raft of criminal charges, including accepting illegal payments of gold and violating a colonial-era secrecy law.

She went on trial for sedition on Tuesday, but journalists were barred from observing proceedings.