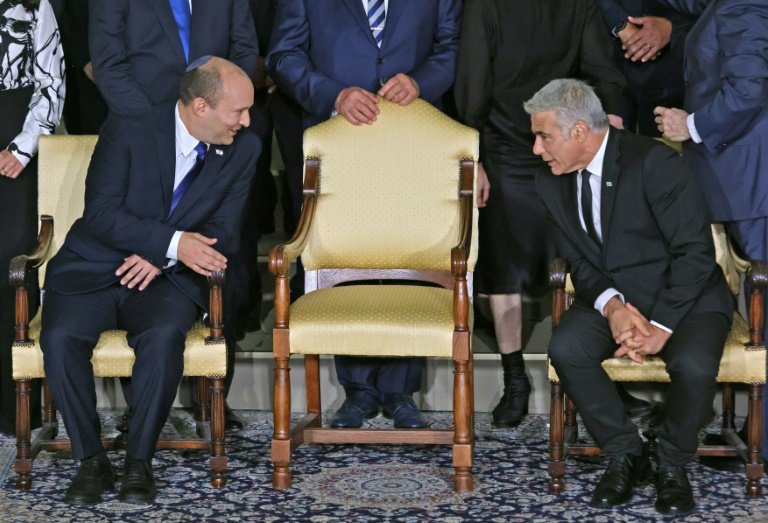 Israeli Prime Minister Naftali Bennett (L) and alternate Prime Minister and Foreign Minister Yair Lapid chat ahead of a photo session at the president's residence in Jerusalem on June 14, 2021 / © AFP

Israel's new prime minister, Naftali Bennett, got down to work Monday at the head of a precarious coalition government that faces stark challenges, after 12 years under right-wing Benjamin Netanyahu.

The watershed moment saw an ideologically disparate eight-party bloc, ranging from right to left to Arab Islamic conservatives, band together in parliament on Sunday to unseat the battling veteran known as Bibi by a wafer-thin margin of 60 votes to 59.

Within hours Bennett, a tech millionaire and former special forces commander, was stepping into his new role, speaking with US President Joe Biden and receiving a briefing from national security adviser Meir Ben-Shabbat.

And later Monday, the 49-year-old's first full day as Israel's leader, he met his one-time ally Netanyahu as new ministers marked the beginning of Israel's 36th government at the presidential residence.

In a statement, Biden said: "I look forward to working with Prime Minister Bennett to strengthen all aspects of the close and enduring relationship between our two nations. Israel has no better friend than the United States." 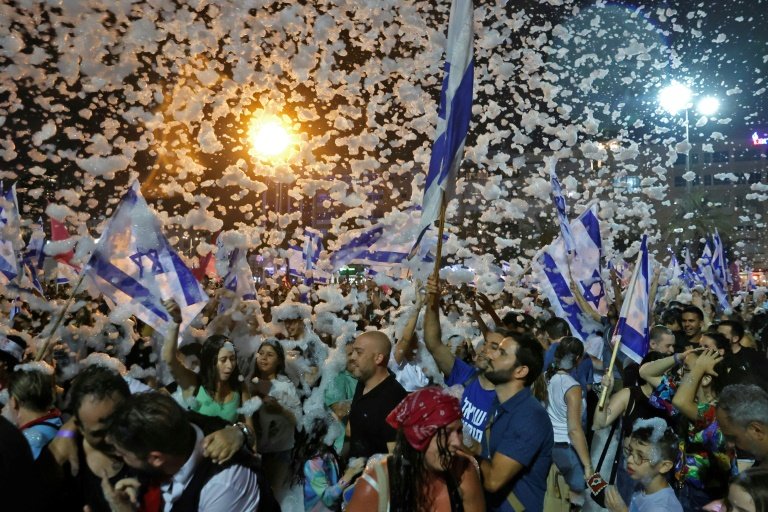 Israelis celebrate the passing of a Knesset vote confirming a new coalition government during a rally in coastal city of Tel Aviv on June 13, 2021 / © AFP

In response, Bennett tweeted: "I look forward to working with you to strengthen the ties between our two nations."

But the potential for strain appeared on the horizon: Biden has encouraged the negotiation of a new nuclear deal with Iran, which Bennett promised in his speech to parliament he would staunchly oppose.

That vow was among the plans Bennett laid out that could be heard over rancorous jeers and shouts of "liar" and "criminal" from the Knesset, where many right-wing MPs are furious he joined forces with coalition architect Yair Lapid, a centrist.

Lapid, a 57-year-old former television presenter, is set to take over the premiership after two years serving as foreign minister -- if the fragile coalition manages to hold onto power that long.

After four inconclusive elections in under two years, Bennett said the "time has come for different leaders, from all parts of the population, to stop, to stop this madness".

Whether the bloc manages to keep power was an afterthought for many Israelis on Sunday night, with thousands clamouring into the streets to celebrate Bibi's demise. 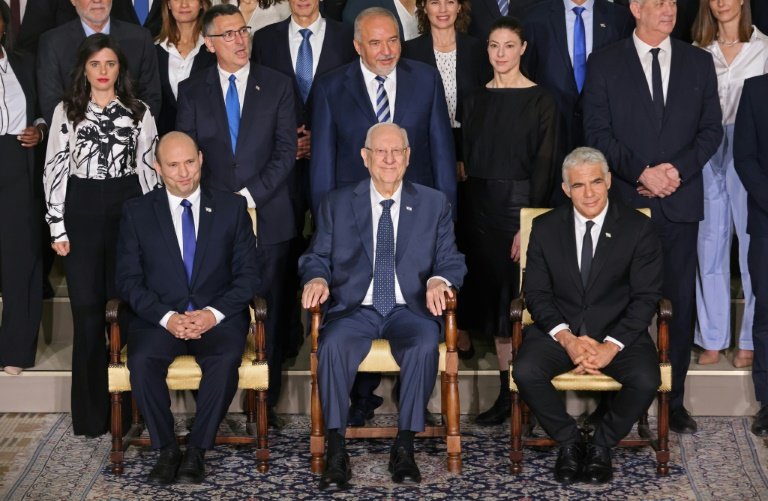 During his record-long tenure, Netanyahu became practically synonymous with Israeli politics, and for some young people the only leader they had known.

"This morning is the dawn of a new day," said Ben Caspit, a Netanyahu biographer, in a column published in the Israeli outlets Maariv and Walla.

"It is a morning of hard, sometimes Sisyphean work, to rebuild the ruins. Netanyahu and Bibi-ism were not defeated by the left or by the right, but by sanity, or at least by the yearning for sanity," said Caspit.

"We have a strong opposition" determined "to bring down this dangerous left-wing government, this scam government that will fall quickly," he said.

"The only thing that unites them is hatred, rejection and thirst for power," said the hawkish veteran who is mired in a legal battle involving corruption charges, which he denies but that could see him imprisoned.

On Tuesday, Israel's new government could already face its first test: a nationalist "March of the Flags", which had been scrapped a week prior because of its route through flashpoint zones of annexed east Jerusalem, is expected to proceed. 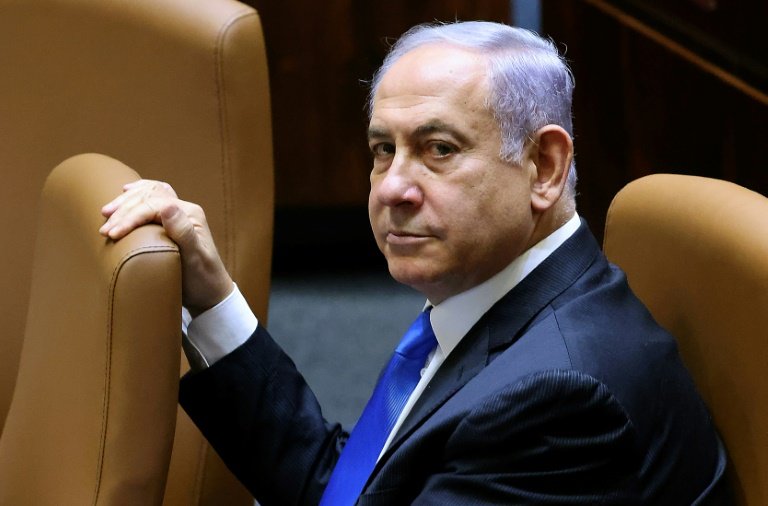 During his record-long tenure Netanyahu became practically synonymous with Israeli politics, and for some young people the only leader they had known / © AFP

The risk of unrest has been exacerbated as far-right figures denounce restrictions meant to avoid scuffles in Jerusalem's Old City, with police urging marchers to avoid tense areas.

The Knesset approval of a new government comes at a time of simmering tensions with the Palestinians, and just a month after an 11-day war between Israel and the Hamas militants who rule the Gaza Strip.

Leaders of the blockaded coastal enclave have said political developments in Israel don't "change the nature of our relationship".

"It's still a colonising and occupying power that we must resist," said Hamas spokesman Fawzi Barhoum.

The West Bank-based Palestinian Authority lauded Netanyahu's departure, but lashed out at the new government.

Netanyahu's ousting closes the chapter on one of the "worst periods in the history of the Israeli-Palestinian conflict," said PA prime minister Mohammed Shtayyeh, even as he dismissed the new Israeli government as being as "bad" as the previous one.

Israel's arch-foe Iran also dismissed the significance of the change of government.

"I don't think that the policy of the occupation regime in Jerusalem will change with the arrival of this person or the departure of that person," said foreign ministry spokesman Saeed Khatibzadeh.

On the streets of Tel Aviv, there was optimism about the new government.

"There is a sense of renewal in the air... what used to be is over now and a new door is being opened," Veren, a resident of Ramat Gan, told AFP.

But others said they would not vote for Bennett again after he joined forces with rivals. "I voted for him and he stole my vote. I feel cheated," said Yossi.