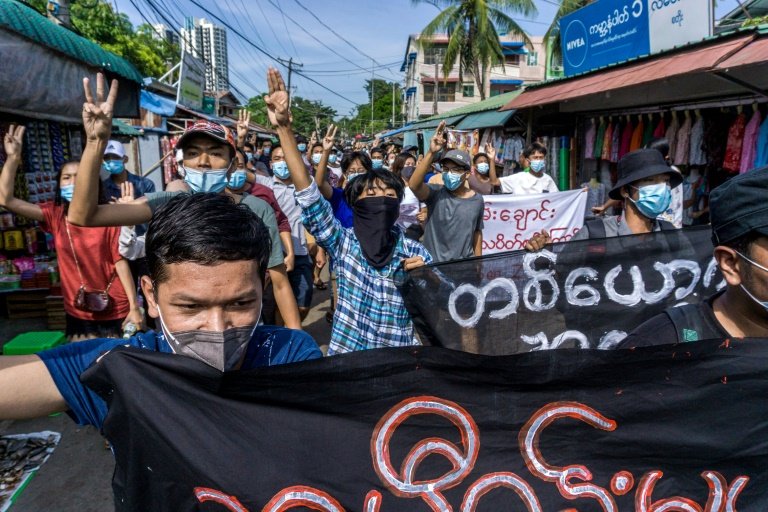 Myanmar has been in uproar since the military seized power in a February 1 putsch, with near-daily protests and a nationwide civil disobedience movement / © AFP

The employers of an American journalist detained by Myanmar authorities said Monday they were yet to receive any information on his whereabouts or wellbeing, a week after he was detained.

Managing editor of news outlet Frontier Myanmar Danny Fenster, a US citizen, was detained on May 24 as he attempted to board a plane to leave military-ruled Myanmar.

"Despite multiple attempts, Frontier has still not been able to confirm with the authorities why Danny has been detained," the outlet said in a statement Monday.

"We have not been told what charges he is facing, if any, and have not been able to contact him. We have received no information whatsoever from the authorities about his detention."

Myanmar has been in uproar since the military seized power in a February 1 putsch, with near-daily protests and a nationwide civil disobedience movement.

More than 800 people have been killed by the military, according to a local monitoring group.

The press has been caught in the crackdown as the junta tries to tighten control over the flow of information, throttling internet access and revoking the licences of local media outlets.

The US State Department has said it is "deeply concerned" about Fenster, and demanded his release.

Frontier said it understood Fenster was being held in Yangon's Insein prison.

"We know that Danny has done nothing wrong and we demand his immediate and unconditional release," its Monday statement added.

Fenster, 37, had been working for the outlet for around a year and was heading home to see his family, Frontier's chief editor, Thomas Kean, told AFP.

His mother Rose told CNN on Sunday the situation was "a total nightmare".

"It's a total feeling of no control. It's heart-wrenching," she said.

"I just want my son home no matter what it takes. Please release him and send him home to his family."

Japanese reporter Yuki Kitazumi was detained by authorities in Myanmar in April and was also held in Insein until being freed earlier this month.

In March, a BBC journalist was briefly detained after being seized by plainclothes officers while reporting outside a court in the capital Naypyidaw.

Separately, Polish photojournalist Robert Bociaga -- who was also arrested while covering protests -- was released in March after nearly two weeks in detention.

Myanmar ranked 140 out of 180 countries in the 2021 Reporters Without Borders Press Freedom Index.

Since the coup, journalists in Myanmar "face systematic arrest campaigns and censorship", the watchdog said.

"Many will resign themselves to working clandestinely in order to be free to report what is happening and to evade the police," it added.