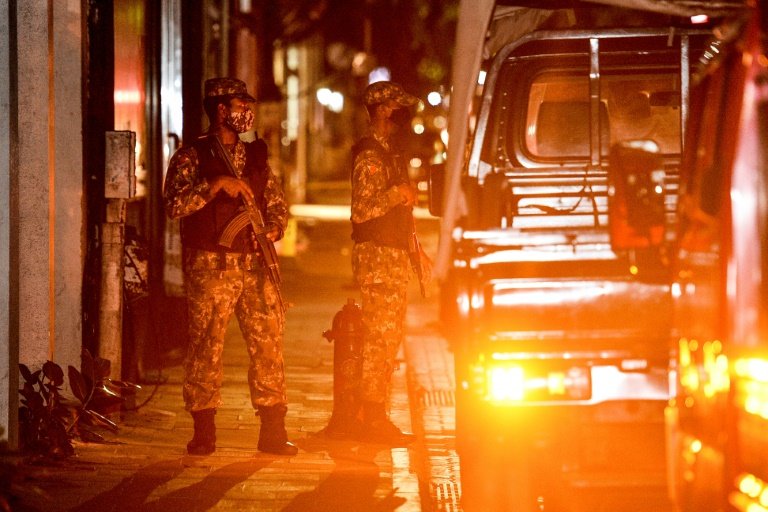 Soldiers secure a site after a bomb blast injured former Maldives president and current parliament speaker Mohamed Nasheed in Male on May 6, 2021 / © AFP/File

The unidentified man, reportedly a known Islamist extremist and the fourth person to be arrested, parked the motorcycle rigged with a bomb that exploded in Male on May 6, police sources said.

Nasheed, 54, who famously held an underwater cabinet meeting to highlight the dangers of rising sea levels for his low-lying nation, was flown to Germany last week following 16 hours of emergency surgery.

A ball bearing in the bomb missed his heart by a centimetre (0.4 inches), and shrapnel was removed from his lungs, liver and limbs.

He now appears to be on the mend, posting photos on social media of himself walking outside the medical facility in Germany and tucking into a Sri Lankan meal sent by Colombo's envoy in Berlin.

There has been no claim of responsibility for the attack, but his Maldivian Democratic Party has said religious extremists and political interests could be involved.

The Indian Ocean archipelago nation of 340,000 Sunni Muslims has had past brushes with Islamist extremism.

Nasheed ended decades of one-party rule in the Maldives and became its first democratically elected president in 2008, only to be toppled in a coup in 2012.

He then spent several years in exile and today remains a powerful figure in the nation's murky politics, holding the post of speaker and parliament as a close ally of President Ibhramim Mohamed.