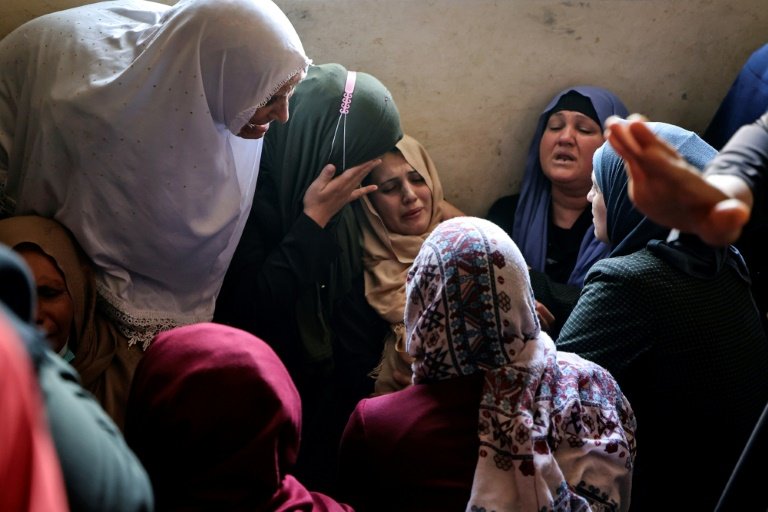 The mother of Palestinian Hussein Hamad, 11, is comforted by mourners after he was killed in an Israeli air strike in the northern Gaza Strip / © AFP

Young brothers Ibrahim and Marwan were filling sacks of straw in northern Gaza when an Israeli strike came from the skies. In an instant, they and three other relatives were killed.

Bloodstains could still be seen Tuesday outside their house in Beit Hanun in the northern Gaza Strip, close to a barrier separating the Palestinian territory from Israel.

The boys had been packing straw to sell at a local livestock market, said their cousin, also called Ibrahim.

He and the two brothers, aged 10 and 14, "had prepared three sacks, and I had just left to take one to put on the cart," he told AFP.

"We were laughing and having fun, when suddenly they began to bomb us, everything around us caught fire."

"I saw my cousins set alight, and torn into pieces," said the 14-year-old, breaking down in tears.

"Why did they leave me? I would have wanted to die as a martyr like them."

Their cousins, three-month old baby Yazan and 10-year-old girl Rahaf, were also killed in the strike.

Another family member, 22-year-old Ahmad, died later Tuesday from his injuries. He had been due to be married on Saturday.

None had had enough time to take shelter when the first Israeli strikes hit Gaza on Monday evening in retaliation for a volley of rockets launched from the Palestinian territory into southern Israel.

The Islamist Hamas group, which runs the Gaza Strip, has rained hundreds of rockets on Israel in solidarity with hundreds of Palestinians wounded since Israeli riot police clashed with large crowds of worshippers at Jerusalem's Al-Aqsa mosque on Friday.

Hamas had Monday warned Israel to withdraw all its forces from the mosque compound, which is holy to both Muslims and Jews, as well as the Jerusalem district of Sheikh Jarrah, where looming evictions of Palestinian families have fuelled anger.

Just after the Israeli strikes began, the Israeli army said it had targeted a Hamas commander in Beit Hanun. And the movement swiftly confirmed the death of Muhammad Fayyad.

At least 30 people have been killed, mostly Palestinians, since the start of the air strikes on Monday evening. More than 125 have also been wounded in Gaza.

On the Israeli side, two people were killed and dozens injured in Ashkelon, an Israeli town lying close to Gaza.

Hamas said it had unleashed 137 rockets on the town on Tuesday. Later Tuesday it also unleashed a barrage of rockets close to Tel Aviv, killing one person and forcing the closure of Israel's main airport.

Hundreds of people brandishing Palestinian flags attended Tuesday's funerals of several of the victims in Beit Hanun, which lies just one kilometre from the Erez crossing point into Israel.

As the procession of mourners reached the cemetery, a volley of rockets thrust into the skies heading towards Israeli territory. 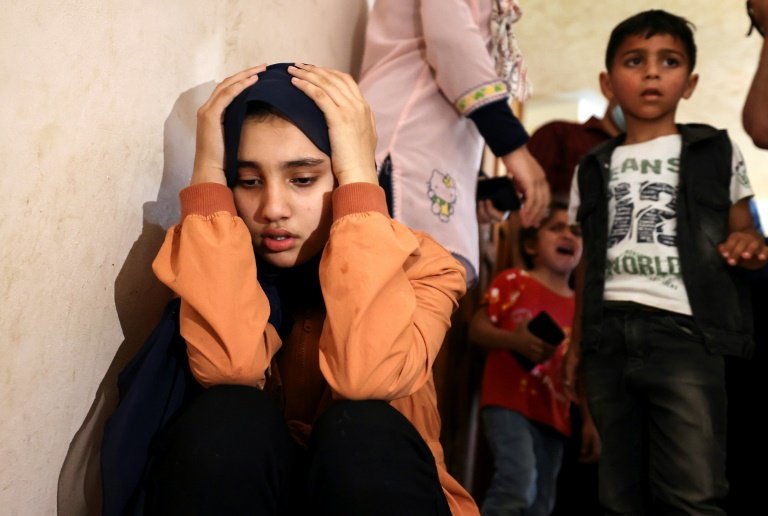 Relatives of Palestinian Hussein Hamad, 11, mourn during his funeral in Beit Hanun / © AFP

Sitting in the cemetery was Abu Hussein Hamad stroking the face of his 11-year-old son, Hussein, for the last time before he was buried.

"What did this innocent child do?" he asked, tears welling up in his eyes.

Hussein was killed in the same strike as the five members of the al-Masri family, his neighbours.

"I promised to buy him new shoes for the Eid al-Fitr," said the sobbing father, referring to this week's celebrations to mark the end of the holy month of Ramadan.

"They killed him," she said. "He hadn't committed any crime."