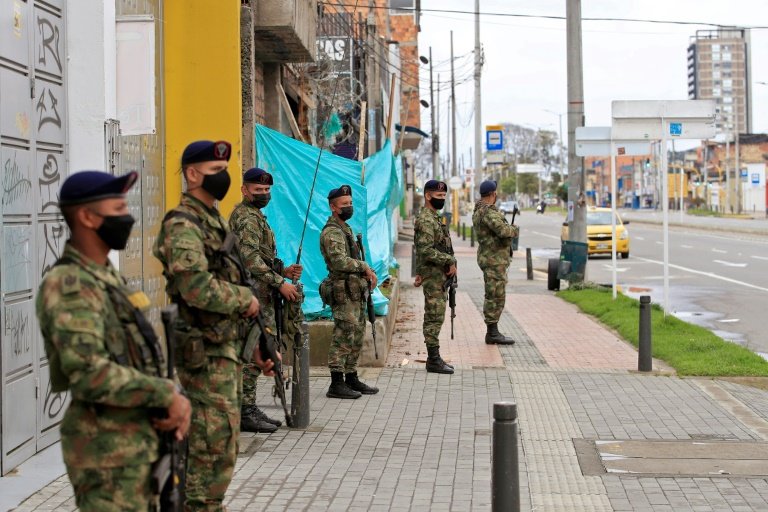 In Colombia, a country still reeling from six decades of civil war and battling ongoing spurts of violence, fears have been raised of a creeping militarization as police and soldiers have forcefully clamped down on recent protests.

Colombia's human rights ombudsman says 19 people -- 18 of them civilians -- have been killed and more than 800 injured in clashes with uniformed officers deployed as tens of thousands of protesters took to the streets in recent days in anti-government rallies.

With the backing of the army commander, President Ivan Duque said Saturday he would use "military assistance" to combat "those who through violence, vandalism and terrorism seek to intimidate society".

The defense ministry said 47,500 personnel were put into operation countrywide.

For many Colombians, deploying soldiers against a civilian population "was received negatively, as a militarization" of public order policing and as a form of "repression," said Eduardo Bechara, a professor of public policy at Colombia's Externado University. 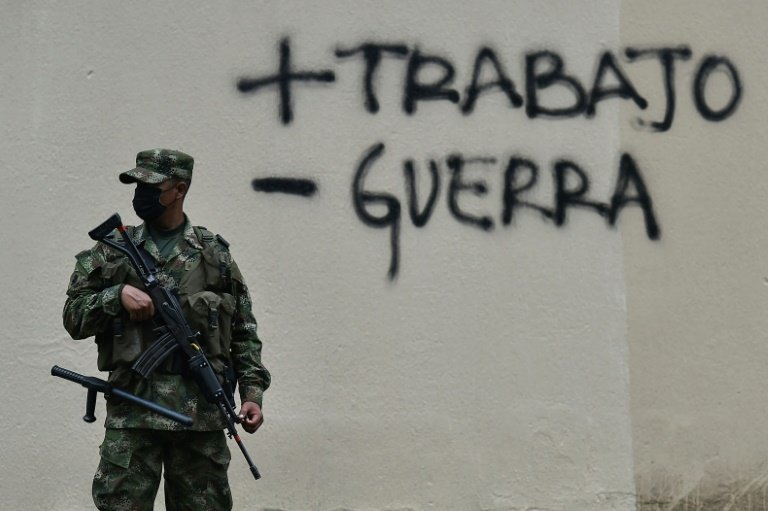 After six decades of armed conflict not quite quelled by the signing of a 2016 peace agreement with the FARC rebel group, the government is more accustomed to waging battle than dealing with urban protests, said Bechara and other experts.

The government blames the chaos on "premeditated" violence "organized and financed by dissidents of the FARC" who did not accept the peace deal, and the ELN or National Liberation Army -- the last active guerilla group in the country.

The first target for military deployment Friday was Cali, a city in western Colombia with a long-standing problem of violent crime blamed on warfare between rival drug cartels.

Defense Minister Diego Molan announced the deployment of 700 soldiers to the city to confront "criminal organizations" he said were fomenting violence.

But Ariel Avila, the deputy director of Colombia's Foundation for Peace and Reconciliation, said the move was a warning to protesters.

"It is the strategy of old... a message to shut down the protests," he told AFP.

In Bogota and Medellin, opposition mayors declined military help, yet soldiers were seen patrolling the capital by presidential order.

The police falls under the ministry of defense.

The country with a poverty rate of more than 42 percent spent $9.2 billion on the military in 2020, according to the Stockholm International Peace Research Institute.

This represented 3.4 percent of GDP -- higher than the world average of 2.4 percent but lower than the United States' 3.7 percent and Russia's 4.3 percent.

Colombia's police force has found itself under scrutiny in recent years.

Last year, it responded with force to demonstrations against police brutality. Thirteen youths were killed in clashes and more than 500 people injured, including 75 hurt by projectiles allegedly launched by police.

The resulting outcry was such that the Supreme Court ordered the defense ministry to apologize for the excesses and to rethink its modus operandi.

But NGOs, rights defenders and international bodies say the abuses have not stopped.

Observer group Temblores says 940 cases of police abuse have been reported to it in the last few days of protests.

The UN, United States, European Union and rights groups expressed concern Tuesday after reports of the disproportionate use of force against protesters, calling for calm and respect for human rights.

Duque's government for its part, has not issued any comment, and has so far recognized one civilian death.

In such a volatile situation, adding soldiers to the mix is "a terrible risk," said Avila.

"It is an excessive response... which will increase the number of deaths," he told AFP.

For international security expert Florent Frasson-Quenoz of the Javeriana University, the government's tough response was aimed at "far right voters" it hopes will return Duque's conservative Democratic Center party to power in elections next year.

He added Colombia was experiencing a return to the "heavy-handed" way of governing of the 2000s, "when the security situation was at its most difficult".

The protests have continued despite Duque withdrawing the tax reform bill which Colombians said would make them poorer at a time of dire economic straits.

New demonstrations have been called for Wednesday as the public mood seems to have turned against those in power.

"The people in the streets are demanding much more that the withdrawal of the tax reform," said the National Strike Committee organizing the protests.

This is an opportunity, said Bechara, for "the government and other political, social and economic sectors to converge around the need to rethink security."