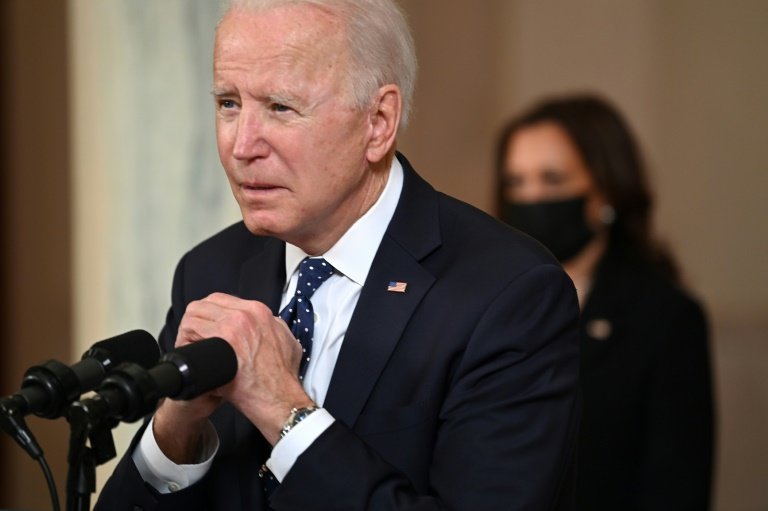 US President Joe Biden gestures as he delivers remarks on the guilty verdict against former policeman Derek Chauvin at the White House in Washington, DC / © AFP

Politicians, rights activists and family members and even world leaders reacted with jubilation and relief Tuesday as sacked Minneapolis policeman Derek Chauvin was convicted of the murder of George Floyd, a Black man who died when the officer knelt on his neck for more than nine minutes last year.

Here are some the immediate reactions following the announcement of the guilty verdicts on all three counts -- second degree murder, third degree murder and second-degree manslaughter.

"Systematic racism is a stain on our nation's soul... No one should be above the law. Today's verdict sends that message. But it's not enough. We can't stop here." - Biden during an evening address to the nation from the White House 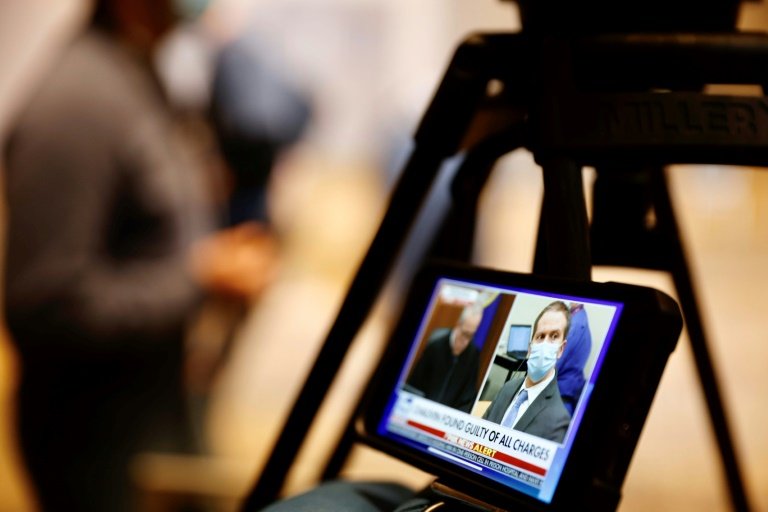 "A measure of justice isn't the same as equal justice. This verdict brings us a step closer, and the fact is we still have work to do. We still must reform the system." - Kamala Harris, America's first Black vice president, who also spoke from the White House.

"I am feeling tears of joy, so emotional that no family in history ever got this far. We were able to get a guilty charge on all counts. We got a chance to go to trial and we took it all the way. This right here is for everyone that's been in this situation. Everybody." - Floyd's brother, Rodney Floyd 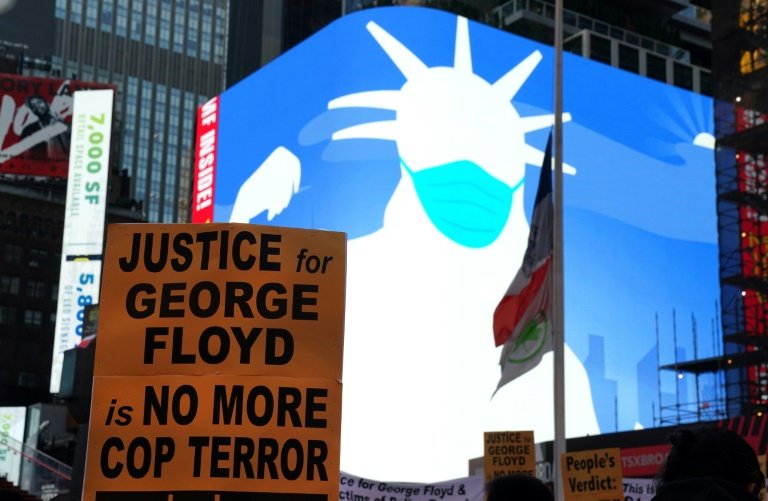 "GUILTY! Painfully earned justice has finally arrived for George Floyd’s family. This verdict is a turning point in history and sends a clear message on the need for accountability of law enforcement. Justice for Black America is justice for all of America!" - Floyd family lawyer Ben Crump

"Today, a jury did the right thing. But true justice requires much more. Michelle and I send our prayers to the Floyd family, and we stand with all those who are committed to guaranteeing every American the full measure of justice that George and so many others have been denied." - former US president Barack Obama

"George Floyd's family and community deserved for his killer to be held accountable. Today, they got that accountability." - former first lady and ex-US Secretary of State Hillary Clinton

"The jury made the right decision in convicting Derek Chauvin for murdering George Floyd. His tragic death, and the evidence at the trial, made painfully clear that we must do much better in recruiting, training, and holding law enforcement accountable to the communities they serve. The failure to do so continues to plague America, as we have seen in recent days." - former US president Bill Clinton

"That a family had to lose a son, brother and father; that a teenage girl had to film and post a murder, that millions across the country had to organize and march just for George Floyd to be seen and valued is not justice. And this verdict is not a substitute for policy change." - US Congresswoman and Democratic rising star Alexandria Ocasio-Cortez

"Chauvin might never see the light of freedom again. That would be just. But it wouldn't be nearly enough. The SYSTEM that let him murder George Floyd must be changed. But for a bystander’s iPhone camera, Chauvin wd’ve gotten away with murder!" - Harvard law professor Laurence Tribe.

"While today’s verdict is a step forward in the fight for police accountability and may help heal a grieving community, the systems that allowed a police officer to murder Mr. Floyd, ripping him away from his family and the communities that loved him so much, remain fully intact." - the American Civil Liberties Union

"I was appalled by the death of George Floyd and welcome this verdict. My thoughts tonight are with George Floyd’s family and friends." - British Prime Minister Boris Johnson