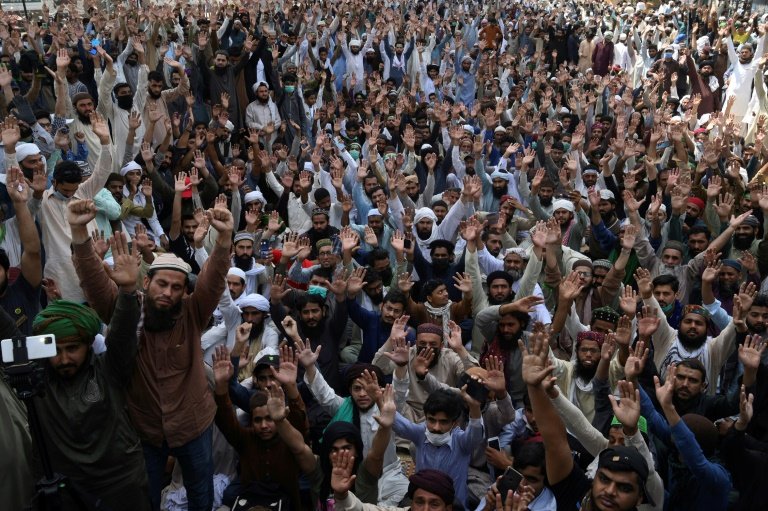 Pakistan's parliament has postponed until Friday a debate on whether the country should expel the French ambassador, as the government bids to appease a radical party that has threatened more violent protests unless the envoy is kicked out.

The Tehreek-i-Labbaik Pakistan (TLP) has waged an anti-France campaign for months since President Emmanuel Macron defended the right of a satirical magazine to republish cartoons depicting the Prophet Mohammed -- an act deemed blasphemous by many Muslims.

Interior Minister Sheikh Rashid Ahmed on Tuesday said the government had held negotiations with TLP leaders, who agreed to call off the protests after learning a resolution would be discussed in parliament on the future of the French envoy.

TLP leaders confirmed Tuesday they had called off further action, and thousands of supporters dispersed from a mosque where they had gathered in Lahore.

"After the promise the government made to us... I feel there is no need for any protest or sit-in. Praise be to God our main demand has been fulfilled," said regional leader Muhammad Shafiq Ameeni.

At a special session of the National Assembly earlier Tuesday, the speaker pushed back a resolution by a ruling party member on the issue, saying it should be tabled collectively by the government and opposition, before adjourning until Friday.

"We have fulfilled our agreement... we said that we will bring a resolution in the house and a resolution was presented," Federal Minister of Information Fawad Chaudhry said later.

"Now if the opposition accepts it or not, or if they want to amend it and want changes, then it is a parliamentary process under which the matter will go ahead."

Resolutions relating to sensitive Islamic issues are often passed unanimously in Pakistan's parliament, but are non-binding, with many previous votes not enacted by the government.

Several police officers were killed in clashes with demonstrators this week, while 11 others were held hostage for several hours at a TLP mosque on Sunday, Lahore police said.

The TLP says several of its supporters also died in skirmishes.

Prime Minister Imran Khan on Monday pleaded with the radical group to end its violent campaign to oust the ambassador, saying the unrest was harming the nation.

"It doesn't make any difference to France," he said in a national address broadcast on television.

"If we keep protesting our whole lives we would only be damaging our own country and it will not impact (the West)."

The French embassy last week recommended all its citizens leave the country, and on Monday a source at the foreign ministry said Paris was recalling all non-essential staff and their families.

The Pakistan government banned the TLP last Wednesday -- effectively labelling the group a terror organisation -- and police arrested thousands of protesters during clashes, but Rashid said no action would be taken against them.

"Cases registered -- including those under the fourth schedule -- will also be withdrawn," he said, referring to charges that fall under anti-terror laws.

Few issues are as galvanising in Pakistan as blasphemy, and even the slightest suggestion of an insult to Islam can supercharge protests, incite lynchings, and unite the country's warring political parties.

"I think the prime minister has realised that appeasing the radical forces isn't an easy task because when you try to please them they demand more and more," security analyst Amir Rana told AFP.

"So far he has failed to maintain the balance."

"There is no doubt there is a bind," said political analyst Mosharraf Zaidi.