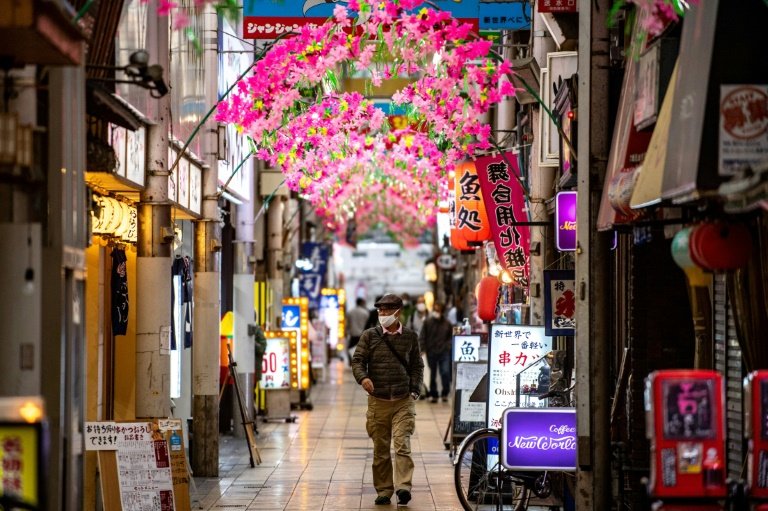 Japan's third most populated region on Tuesday asked the central government to impose a state of emergency over the coronavirus as infections rise just three months before the country hosts the Olympics.

Osaka prefecture only lifted a state of emergency two months ago and restrictions are expected to be tougher this time, possibly involving store and shopping mall closures.

That would still fall short of the harsh lockdowns seen in many other parts of the world however.

Tokyo and several other areas are expected to follow suit, hoping to avoid the crisis facing Osaka's healthcare system, where beds for Covid-19 patients in severe condition have run out.

"Osaka is in a very tough situation in terms of the number of cases and the situation of the medical system," Governor Hirofumi Yoshimura told reporters, adding that current measures were "not enough".

"Considering that, I decided to request that the central government declare a state of emergency," he said. Official government approval of the measures was expected to follow later.

Osaka is already under virus restrictions that mostly call for restaurants and bars to close by 8pm and urge residents to avoid unnecessary outings.

Those measures prompted the region to bar the Olympic torch relay from public roads -- with the flame instead being carried by torchbearers on a closed track inside a park without spectators.

"The flow of people and the fast pace of the variant strains are causing surges," Yoshimura warned Tuesday, calling for the closure of shopping malls, amusement parks and department stores.

"Now is the time to take strong measures for a short period of time, he added, also urging people to move to teleworking.

According to local media, Tokyo also plans to request the government declare a state of emergency this week.

And at least two regions neighbouring Osaka are reportedly planning on requesting the measure.

The surge in cases comes with just over three months until the virus-postponed Tokyo Olympics, which organisers insist can be held safely.

Japan declared a virus state of emergency in early January for several areas, lifting it on March 1 in Osaka and three weeks later in Tokyo.

But infections have ticked back up, driven by more infectious variants, and vaccinations are moving slowly.

Only the Pfizer vaccine has been approved and so far it is being given only to medical workers and the elderly.

Just 25 percent of 4.8 million healthcare workers and slightly more than 13,000 elderly people have so far received a first vaccine dose.

Japan's government says they will have sufficient supply by September to vaccinate everyone over the age of 16 in the country of 125 million, but a timeline for completing the vaccinations is not yet clear.