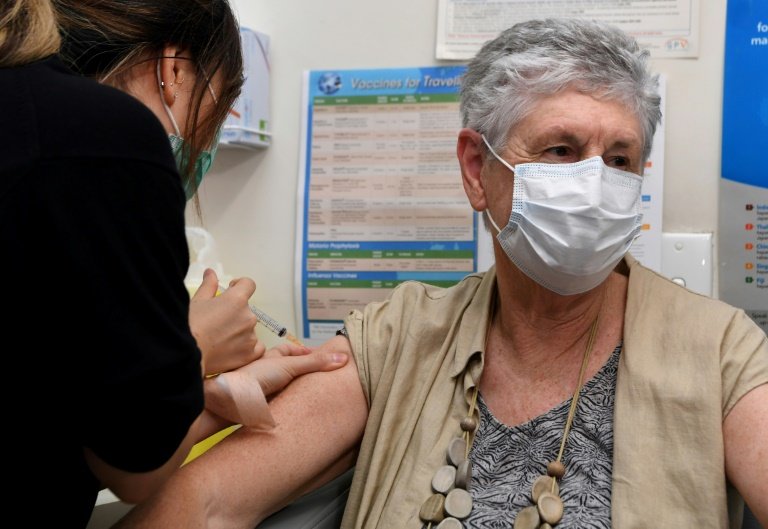 Australia is scrambling to fix a troubled vaccine roll-out, with just under 1.2 million doses administered by Sunday / © AFP/File

Australia will dispatch its trade minister on a mission to Europe on Thursday, amid a dispute over more than three million doses of a EU-manufactured shot which Canberra has purchased but not received.

In a further blow to the flagging program, officials last week said the AstraZeneca shot should no longer be given to people under the age of 50, unless they had already received a first dose without any ill effects.

Australia has been one of the world's most successful countries in containing the spread of Covid-19, with no current known community transmission and fewer than 30,000 cases recorded since the pandemic began.

Last year Morrison boasted that Australia would be "at the front of the queue" for vaccines after reaching deals with AstraZeneca, Pfizer and Novavax.

But it has fallen far behind the government's own schedule for vaccinating people against the disease, with just under 1.2 million doses administered by Sunday when it had pledged to give four million by the end of March.

The government has blamed the slowdown on the EU's failure to deliver expected AstraZeneca doses, but state governments have also complained about confusion in the distribution of vaccines to clinics.

Trade Minister Dan Tehan is now due to leave Thursday for talks with his counterparts in Germany, France and Brussels "to discuss vaccine production and the EU export restriction regime" for AstraZeneca, his office said.

Australia had counted on using AstraZeneca to inoculate most of its population, first using doses imported from Europe and then locally manufactured vaccines as it awaits supplies of Pfizer and yet-to-be-approved Novavax to ramp up.

The vaccine rollout delays have spelled political trouble for Morrison, who just months ago was riding high on the country's coronavirus success and reportedly mulling calling an early election.

Responding to the public pressure, Morrison said Wednesday he would reconvene twice-weekly "national cabinet" meetings with state and territory leaders "for the foreseeable future until we solve the problems and get the programme back on track".

"We are throwing everything at these issues, uniting the nation to keep the vaccination programme safe," he said.