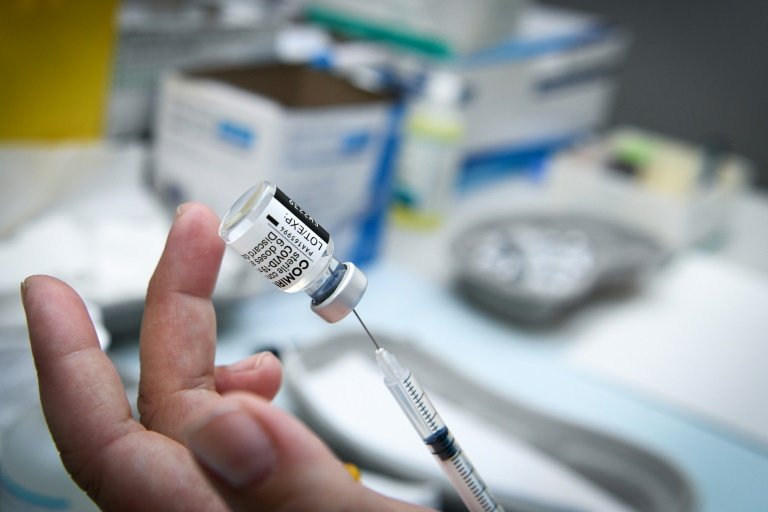 The pandemic that has killed almost 2.9 million people worldwide / © AFP

The fallout over the AstraZeneca jab persisted Thursday with several countries halting its use among younger people, as nations raced to secure much-needed vaccines in the face of fresh virus surges.

Europe's medicines regulator said this week the AstraZenea vaccine could cause very rare blood clots among some recipients, prompting a cascade of countries to pull the plug on giving it to people under a certain age.

Britain sought Thursday to quell fears over the jab, saying the potential side effects were extremely rare -- and the risk of getting seriously sick from Covid-19 was far greater.

The furore over the jab comes as a number of countries battle mounting caseloads and deaths, more than a year into the pandemic that has killed almost 2.9 million people worldwide and ravaged the global economy. 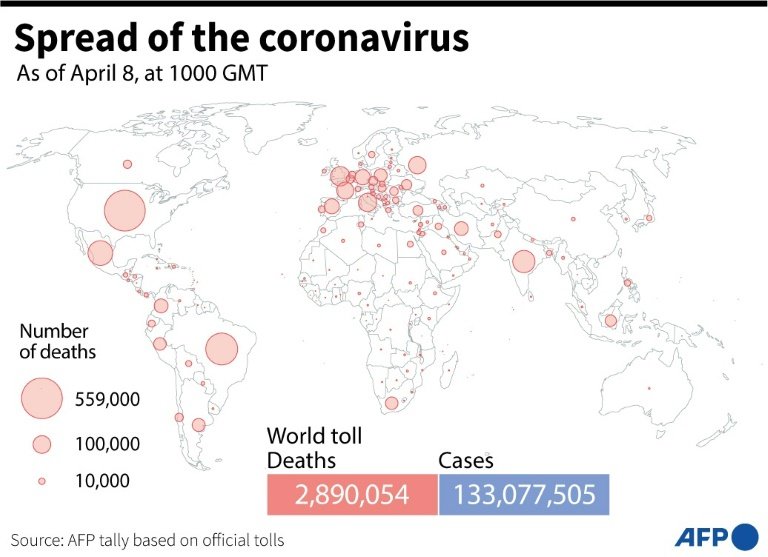 Health Minister Jens Spahn said the EU had decided it will not sign contracts for Sputnik.

"So I said we will hold talks with Russia," he admitted as Germany needs more vaccines quickly.

On the AstraZeneca front, the Netherlands and Portugal became the latest countries to restrict the use of the vaccine to older populations -- mostly over 60 -- joining a list that includes Australia, the Philippines, Italy, France, Germany, Spain and Canada that took the decision earlier.

"We've been taking the necessary precautions based on the best possible medical advice."

The decision came after the European Medicines Agency said Wednesday that blood clots should be listed as a "very rare" side effect of the jab, though it did not say any particular groups were at greater risk.

Britain said it would offer people under 30 "alternative" vaccines to AstraZeneca -- the country has also approved Pfizer and Moderna jabs -- but on Thursday sought to reassure people about getting inoculated. 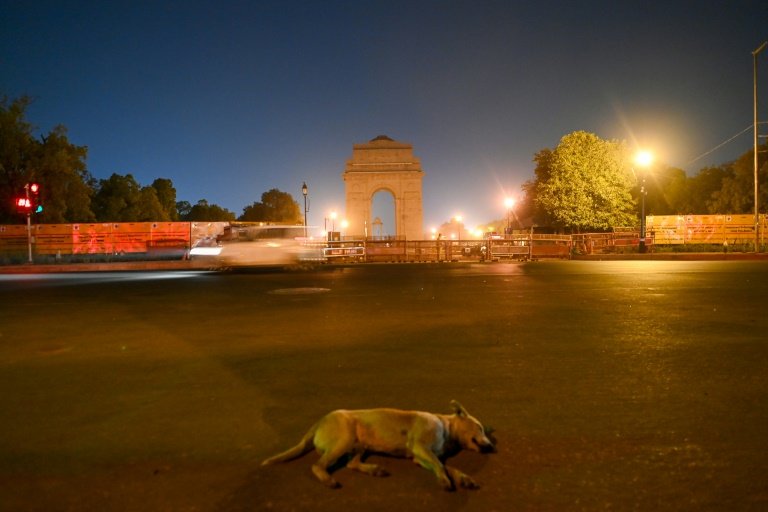 The Indian capital has imposed a night curfew / © AFP/File

"The vaccines are safe, and if you want to have the Pfizer vaccine or Moderna vaccine instead then that is fine," Health Secretary Matt Hancock told the BBC.

"Covid is a horrible disease and long Covid affects people in their 20s just as much it seems as any other age group and can have debilitating side effects that essentially ruin your life."

AstraZeneca has been dogged by controversy -- first banned by some governments for older people over lack of data, then banned outright over clot fears.

It is stored at a warmer temperature and billed as the vaccine of choice for poorer countries since it can be transported more readily than some counterparts.

It has already been administered in 111 countries -- more than its competitors Pfizer/BioNTech and Moderna put together -- according to an AFP database from official sources.

The Covax programme, which provides vaccine doses to poorer countries, was unequivocal.

"The AstraZeneca vaccine remains an important public health tool against the Covid-19 pandemic and is effective at preventing severe cases, hospitalisation and death," said a spokesman for the Gavi vaccine alliance, one of the groups heading the Covax initiative. 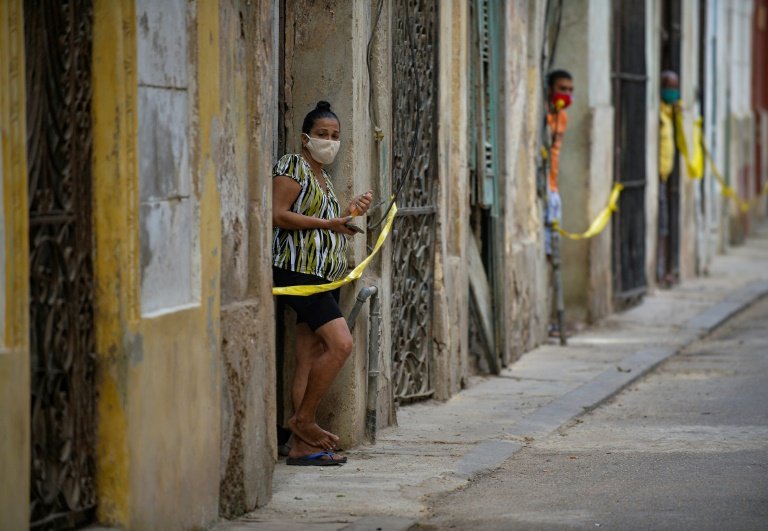 Governments are hoping the vaccines will help them emerge from the pandemic, but with demand far outstripping supply many are scrambling to secure much-needed doses -- as fresh waves lash several countries.

More than 700 million people across India were facing coronavirus vaccine shortages after stocks dried up, even as the country saw a record 126,000 new infections in the past 24 hours.

And Indonesia said the delivery of over 100 million AstraZeneca doses could be delayed because of export restrictions in India -- which produces the jab -- and company supply holdups.

"This is not something we can accept. We immediately communicated with AstraZeneca," Indonesian Health Minister Budi Gunadi Sadikin said. 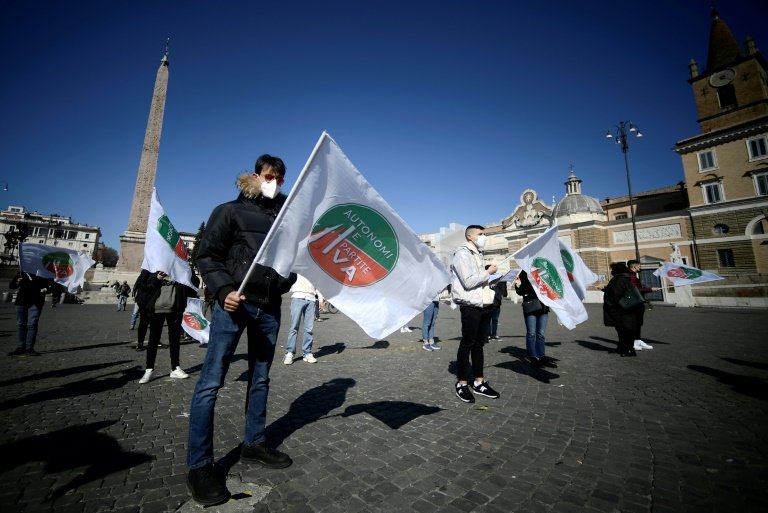 Meanwhile Poland reached a grim new record of more than 950 deaths in the past 24 hours -- the highest yet -- while Iran's cases passed the two million mark.

President Hassan Rouhani's government was under fire for allowing travel during the new year holiday, which many blamed for a spike in cases.

"Some prevented us from using the golden opportunity to put out the coronavirus fire," deputy health minister Iraj Harirchi said, describing the infection rate as "meteoric".

And in Venezuela, the government said economic sanctions against President Nicolas Maduro's administration had blocked it from buying the 30 million vaccines it needed.

The crisis has forced some in the hard-hit country to seek support online via crowdsourcing.

Gabriela Rodriguez, 31, lost her job at a travel agency due to the pandemic and set up a GoFundMe page to help care for her mother, grandparents and a cousin all hit by Covid-19.

She has so far received $1,075 from donors -- money without which "I would be burying my mother now", Rodriguez told AFP with a quivering voice.