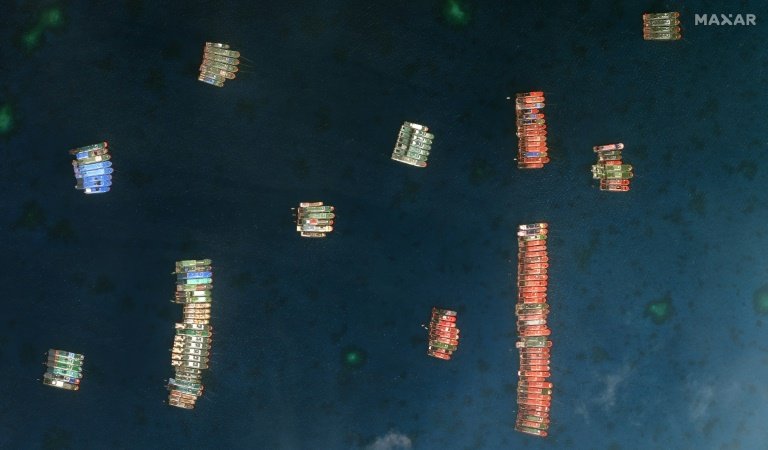 Tensions over the resource-rich waters have spiked in recent weeks after more than 200 Chinese boats were detected at Whitsun Reef, in the Spratly Islands, where China and the Philippines have rival claims / © Satellite image ©2021 Maxar Technologies/AFP

The Philippine defence department said Thursday it was keeping "all our options open" as a diplomatic row with Beijing grows over hundreds of Chinese vessels in the contested South China Sea.

Tensions over the resource-rich waters have spiked in recent weeks after more than 200 Chinese boats were detected at Whitsun Reef, in the Spratly Islands, where China and the Philippines have rival claims.

China, which claims almost the entirety of the sea, has refused repeated appeals by the Philippines to withdraw the vessels, which Manila says unlawfully entered its exclusive economic zone.

While President Rodrigo Duterte has appeared reluctant to confront China on the issue, one of his top aides warned Monday the boats could ignite "unwanted hostilities".

"As the situation (in the South China Sea) evolves, we keep all our options open in managing the situation, including leveraging our partnerships with other nations such as the United States," Philippine defence department spokesman Arsenio Andolong said Thursday.

Andolong's comments came after the United States reminded China of Washington's treaty obligations to the Philippines in the event of an attack in the waters.

"An armed attack against the Philippines' armed forces, public vessels or aircraft in the Pacific, including in the South China Sea, will trigger our obligations under the US-Philippines Mutual Defense Treaty," State Department spokesman Ned Price told reporters Wednesday.

"We share the concerns of our Philippine allies regarding the continued reported massing of PRC maritime militia near the Whitsun Reef," Price said, referring to the People's Republic of China.

Many of the boats detected at Whitsun Reef on March 7 have since scattered across the Spratly archipelago, which is also claimed in whole or in part by Brunei, Malaysia, Taiwan and Vietnam.

Beijing often invokes the so-called nine-dash line to justify its apparent historic rights over most of the South China Sea, and it has ignored a 2016 international tribunal decision that declared this assertion to be without basis.

Duterte, elected in 2016, put the sea dispute on the back burner as he sought closer economic ties with the Philippines' superpower neighbour and strike a course independent of its former colonial master the United States.