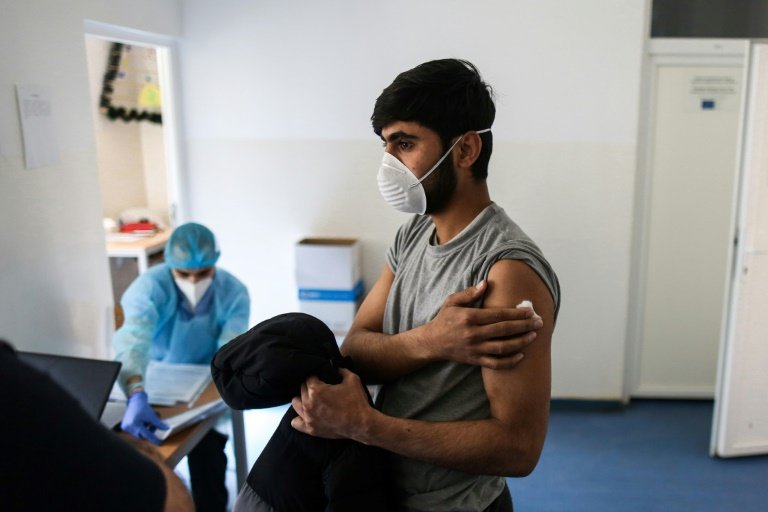 With jabs in abundance, last week Serbia took the highly unusual step of offering foreign citizens the chance to apply to have the shot. Migrants have also been offered the vaccine / © AFP

While most of the world struggles to secure enough Covid-19 vaccines, Serbia faces a different battle -- how to persuade its citizens to get the life-saving shot.

The small Balkan country has so many vaccines available it has even offered jabs to any foreigner who can get themselves there, sparking an influx of thousands of "vaccine tourists" from neighbouring countries.

The situation is the result of a diplomatic juggle between East and West that saw Belgrade secure deals for nearly 15 million vaccine doses for its population of seven million.

With around three million doses already in hand -- a buffet of Pfizer, AstraZeneca, Sputnik V and Sinopharm -- and two million of those already administered, one of Europe's poorest corners has quickly found itself among the continent's fastest vaccinators.

However, according to the government, little more than a quarter of those eligible to receive the precious shot applied for one.

After Serbia vaccinated most of those who came forward, the pace started to stall.

In the last two weeks of March, the number of people receiving their first dose dropped to around 12,000 daily, roughly half the number over the same period in February, according to data collected by AFP from official sources.

With jabs in abundance, last week Serbia took the highly unusual step of offering foreign citizens the chance to apply to have the shot. Migrants have also been offered the vaccine.

The authorities also urged Serbian citizens who had still not been inoculated to simply show up without an appointment.

"I beg you, people, get a vaccine," Serbian populist President Aleksandar Vucic pleaded.

"We have them and we will have more, I beg you, in the name of God, take them," he said.

Serbian doctors fear that take-up of the jab has peaked.

"It's clear that there is not a sufficient number of people willing to get vaccinated," president of a doctors' union Rade Panic told AFP.

According to Serbia's leading epidemiologist Predrag Kon, lack of interest is "solely a consequence" of anti-vaccine misinformation being spread online by fearmongers.

"I've been doing this job for many decades and I have seen their power of persuasion," Kon said, adding that "one or two percent" of the anti-vaxxers "can easily affect up to 50 percent of the undecided".

Many citizens who are reluctant to have the vaccine don't actually consider themselves anti-vaxxers.

"In these crazy times, I have serious doubts... mostly because of the lack of information from the relevant institutions," Ivan, a 32-year-old restaurant owner told AFP.

Serbia's Health Minister Zlatibor Loncar has suggested banning content that undermines the vaccination process from social media platforms, while the police have cracked down on vaccine sceptics, detaining five of them last week for "causing panic".

But Serbia has long been a hotbed of misinformation, fuelled by low levels of trust in government and other institutions tainted by corruption and a lack of transparency.

A survey conducted in October by the Balkans in Europe Policy Advisory Group (BiEPAG), found that more than half of those questioned in the region did not plan to get vaccinated.

"They (Serbian citizens) don't trust the way the state is communicating about the vaccines", BiEPAG's researcher and Balkan expert Florian Bieber told AFP.

Suspicions are also fanned by a handful of doctors, some of whom have garnered hundreds of thousands of followers on social networks and are regularly given space in national media.

"There is a general distrust in science that has been promoted throughout last year, not necessarily by the state leadership, but the media who are close to it", Bieber added.

In March, thousands attended a protest in Belgrade against Covid-19 curbs, and were seen holding hands in a traditional Serbian dance.

Virologists warn that slow immunisation combined with a raging pandemic is the most dangerous combination for developing new variants, including ones that could become resistant to the vaccine.

"We have to be aware that the vaccination process needs to be faster than the virus", virologist Ana Banko told public broadcaster RTS.

The president himself has dodged the needle so far, despite endlessly trumpeting his inoculation in local media.

Vucic believes that once he finally gets vaccinated "half a million" citizens will follow his example in just a week.

"A scenario with a sudden, massive interest in vaccination is unlikely," Panic told AFP.

Doctors agree that "a number of people who idolise Vucic" will decide to get a shot after he does so.

But, for now, they believe vaccinating the desired 65-80 percent of the population remains a distant goal.