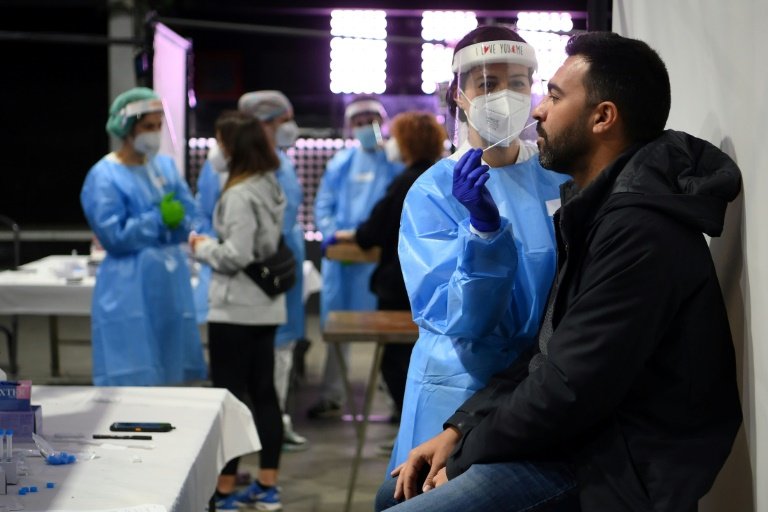 France, Belgium and Poland on Saturday tightened curbs as coronavirus cases surged in Europe while the Philippines prepared for a giant lockdown and Chile confined over 80 percent of its population.

France has admitted that the situation is "critical" and added three more departments to the 16 already under tight restrictions.

Around 20 million people in France, including those in the greater Paris region, are classed as living in high-infection zones.

They are not allowed to travel further than 10 kilometres (six miles) from their home unless they have an essential reason.

"About 10 police teams have been deployed against two in normal times" in Paris's busy Montparnasse station, a police officer told AFP, adding that these numbers would be increased during busy hours.

Only shops selling food, and book and music stores are open and classrooms in high schools are only running at half the capacity.

Daily cases in France have nearly doubled since the start of the month and there have been more than 200,000 new cases every week.

Shops offering "non-essential" services can only receive clients with appointments.

Social distancing in churches in the predominantly Catholic nation has also been tightened with one person allowed in every 20 square metres (200 square feet) instead of 15 square metres earlier.

The Philippines announced Saturday that more than 24 million people in and around Manila will go into lockdown next week.

"The virus is the enemy, not the government," presidential spokesman Harry Roque said.

"While we're at home we expect the infection rates to slow." 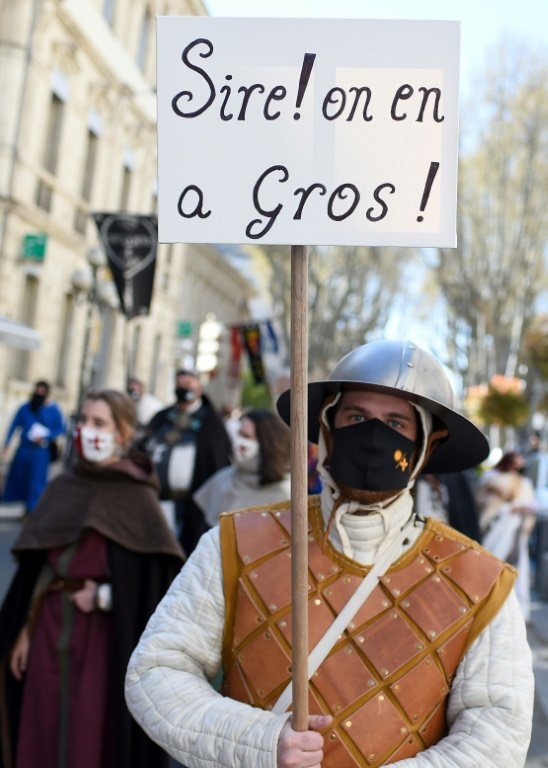 A man wearing a period costume, holds a placard reading "Sire! we are fed up" during a demonstration in southern France / © AFP/File

From Monday, people will have to work from home unless they are considered essential workers, and public transport will be halted.

All mass gatherings will be banned, night-time curfews from 6:00 pm to 5:00 am will be enforced and non-essential businesses will be shut.

Chile also started a new and strict lockdown for more than 80 percent of its population, with shopping trips for even basic products banned during weekends.

The pandemic has killed over 2.7 million people since December 2019, according to an AFP tally on Saturday.

Health officials have rolled out more than 510 million coronavirus vaccine doses around the world, but with big gaps between countries. The World Health Organization on Friday appealed to richer nations to donate vaccines to help poorer ones start inoculations.

The deployment of vaccines has been glaringly unequal, with the United States accounting for more than a quarter of the global total and poorer nations lagging far behind wealthier ones.

While rich EU countries are still struggling to get their inoculations into overdrive, France made clear it sees vaccine policies feeding not just European, but global competition for influence.

"We are looking at a new type of world war," President Emmanuel Macron said after an EU summit.

"We are looking in particular at Russian and Chinese attacks and attempts to gain influence through the vaccine."

However, Moscow -- whose Sputnik V shot is being rolled out in numerous countries across the world -- quickly hit back, with Kremlin officials saying they "absolutely disagree" with Macron's comments.

But Berlin said it would be happy to use Sputnik V if it gets approval from EU regulators.

The deployment of vaccines has been very unequal globally / © AFP

Germany also classified the whole of France as a high-risk zone, which means travellers need to show a negative Covid test and quarantine upon arrival.

Kenya became the latest African country to order a partial lockdown on Friday, shutting schools and bars in and around the capital Nairobi.

"I am convinced that the cost of not acting now would be far greater," said President Uhuru Kenyatta.

In India, too, a sharp rise in infections will see new measures with worst-hit state Maharashtra, including its mega-city Mumbai, put under night curfew from Sunday.

In Brazil, the political heat was turned up on President Jair Bolsonaro on Friday when his predecessor accused him of presiding over the "biggest genocide" in the country's history.

"We must save Brazil from Covid-19," said former leader Luiz Inacio Lula da Silva, adding: "Brazil will not withstand it if this man continues to govern in this way."